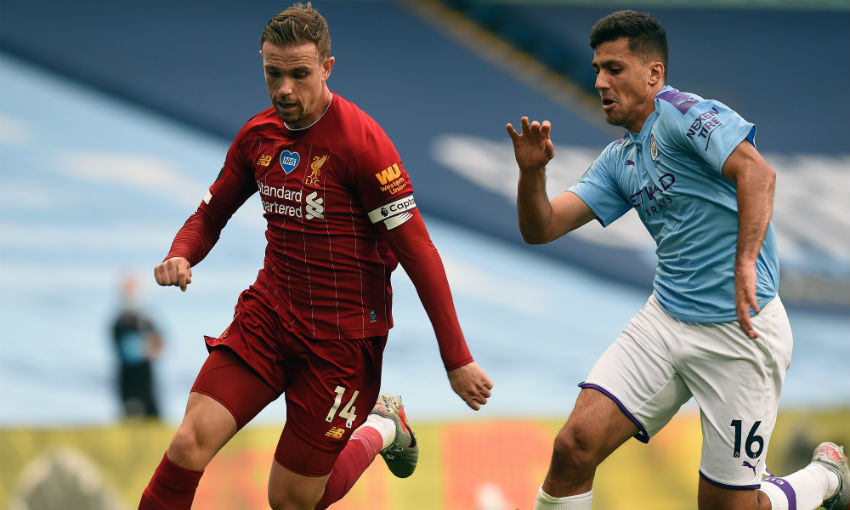 Jordan Henderson offered an honest assessment of Liverpool’s 4-0 defeat at Manchester City on Thursday night, admitting: “We expect more from ourselves.”

The Reds’ first outing as Premier League champions ended in defeat at Etihad Stadium – just the second time this season Jürgen Klopp’s side have suffered a top-flight loss.

After an even opening, City struck three times before the break via a Kevin de Bruyne penalty, Raheem Sterling and Phil Foden. The hosts added a fourth after the interval when Alex Oxlade-Chamberlain couldn’t prevent a Sterling shot from crossing the line.

Asked what he felt went wrong for Liverpool on the night, Henderson told Liverpoolfc.com: “A lot of things but, to be fair, I thought we kept going right until the very end.

“You’ve got to give credit to City, a fantastic side and they finished their chances off. We are bitterly disappointed and after the game the lads are very disappointed with the result as we should be.

“On another night I’d like to think we can finish our chances and it would change the game but unfortunately it wasn’t to be and you’ve got to give credit to City.”

Henderson added: “We are not making any excuses. We are bitterly disappointed and we expect more from ourselves but it can be a lesson for us going forward if we want to improve and keep contending for trophies and being in the run-in for the title next season and other competitions as well.

“We need to keep going, keep improving and keep learning. This is a learning curve tonight so we need to react the right way in the next game.”

Liverpool went closest to opening the scoring in the fixture when Mohamed Salah struck the base of the post.

The Reds threatened on a number of occasions, but were unable to finish their chances.

“So in both boxes obviously we weren’t good enough and we were punished, but I thought the attitude of the lads, we kept going right until the end and we came here to win but unfortunately City were better than us on the night.”

Liverpool return to action on Sunday when Aston Villa visit Anfield – and Henderson is confident of a positive reaction.

He said: “It’s never nice to lose games. We need to show our character and again, react in the right way.

“The next game is Sunday so it comes thick and fast and we need to be ready and keep going. We still want to finish the season off on a high which we’ve still got six games left, so we want to go out there and perform.”