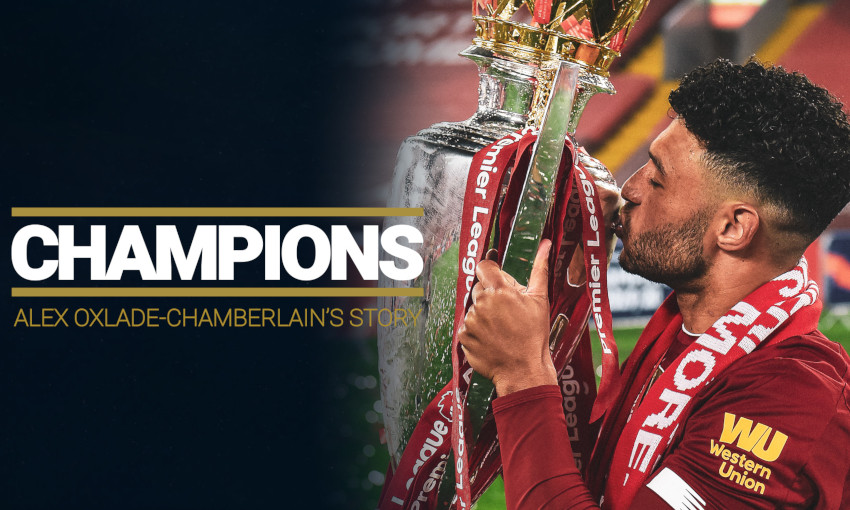 Jürgen Klopp: This is our moment, we've earned it - let's cherish it

Alex Oxlade-Chamberlain will never forget the season he became a Premier League champion - but Liverpool’s No.15 has already set his sights on winning more trophies with the club.

The Reds ended a 30-year wait for domestic supremacy by adding the top-flight title to the Champions League, UEFA Super Cup and FIFA Club World Cup trophies claimed in 2019.

But, while acknowledging the significance of their latest feat, Oxlade-Chamberlain has stated that Jürgen Klopp’s squad are now focused on continuing their winning habit in the years to come.

Watch our exclusive Champions interview with Alex Oxlade-Chamberlain in full on LFCTV GO now. You can start a free one-month trial of LFCTV GO now and this can be cancelled at any time.

“It will be one [season] you would always remember because of how strange it is and having that big break, and obviously what we’ve managed to achieve for the first time in 30 years,” he says, in our exclusive Champions interview series.

“That makes it really special for everyone involved with the club so we will definitely always remember it. It will probably always be talked about as ‘the strange season’ and at the same time the season that we managed to win the league.

“But I don’t think I really think about that too much now. I think we’ve all had a talk and spoke about it, that this is amazing and we need to take this moment in and realise what we’ve achieved, but at the same time we’ve still got time left so why can’t we do this again and win more and more? Then in 20 years hopefully we’ll have a few seasons to talk about. So I think that’s what we are more focused on doing now.

“So I don’t know what I’ll think about it, what people think about this season [in the future]. The only thing in my head and the rest of the boys’ heads is what can we do next season?

“That’s the only thing we can think about now and if we have that mindset every year, we give ourselves more hope and more chance of having more nice conversations in 20 years’ time about multiple seasons and hopefully multiple trophies.

“That’s what we’ve got to focus on. That would make everyone happy involved with this club - and that’s what we look forward to trying to do.”

Oxlade-Chamberlain’s Liverpool career to date has, it’s fair to say, been eventful.

So, how would he sum up his first three years at Anfield?

“It’s been a bit of a rollercoaster, I guess, for all of us,” he states.

“I think obviously the team has taken massive, massive steps forward in those three years, from being a fairly inexperienced team at winning things to, in my first season, making it to the Champions League final then having the disappointment of not winning that final. For me, getting that injury [in his first season] was obviously devastating, then to see the boys go on last season and achieve what they did was another unbelievable step forward for the club and for the team.

"But, again, then to miss out by a point to Manchester City in the league - that can obviously take the stuffing out of a lot of people, a lot of teams, but we followed that up with going and winning the Champions League that year.

“Again, that’s history and something that we all dream of doing and something that is new for all of us in the team. That was sort of the first experience of winning a trophy like that for anyone and obviously as a collective, for us as a team. Then to follow that up with this season winning the Premier League, you couldn’t have asked for it to have gone any better for us as a group, for the club, over the last three years.

“Moving from one club to another, you hope that these things are possible but obviously a lot of the time it doesn’t always pan out as well as it has done. So, it’s a credit to the team, the manager and the club in general what we’ve achieved so far but hopefully this is just the start of something special that we can all create together.”

Enjoy our exclusive Champions series on LFCTV and LFCTV GO throughout the week - liverpoolfc.com/watch. Use code 1920GOFREE to get LFCTV GO free for one month. Terms and conditions apply.

More from our Champions series