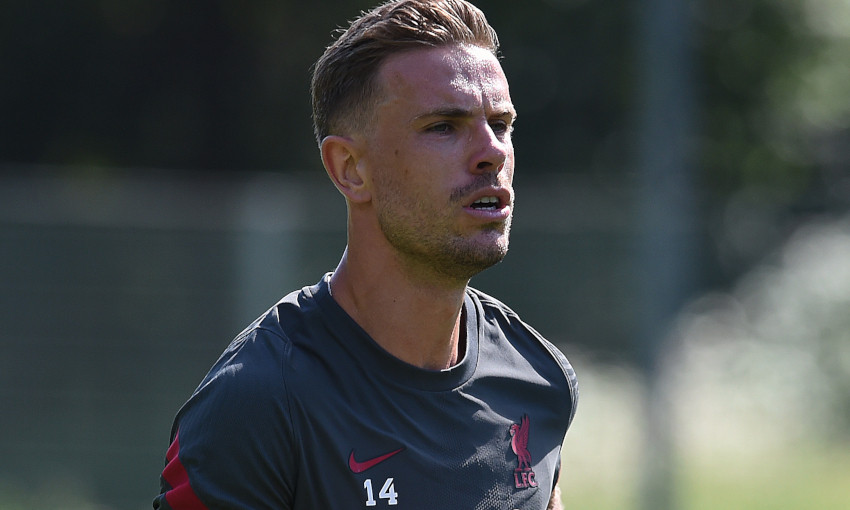 Jordan Henderson exclusive: There's been no title talk during pre-season

Jordan Henderson does not intend to pause and reflect on Liverpool's recent achievements for quite a while – for one very good reason.

“I don’t think I ever will, to be honest. Maybe when I finish and I look back,” begins the captain, who has lifted four major trophies for the club in the past 15 months, during his exclusive interview with Liverpoolfc.com at the training camp in Austria.

“For me, there’s no real point to do it now because I still don’t feel I’ve finished, I feel there’s still a lot more to come. We can be a lot better. I know people will say, ‘Well, how?’ but trust us, in certain games we’ve played, in training sessions, we can still improve. Individuals can still get even better again.

“I still feel as though there is a lot more to come from all of us and if we want to be one of the best teams, then you need to do it consistently – you can’t just do it for a few years and then that’s it. You need to keep going and going and going.

“I look at what a lot of ex-players that have won trophies have said; it’s hard to win one but then it’s even harder to then win another one and another one and keep going. I can certainly see that and we understand that, so it’s just about basically doing what we’ve been doing for a long period of time and focusing on the right things, not getting carried away and not getting too down.

“There will be moments within a season where you maybe have a loss of form, or you’re not playing particularly well or whatever. You will have those moments and it’s about how you deal with them – and we always deal with situations in the right way and we need to continue to do that if we want to be successful again.”

To underscore his argument, Henderson points to the challenge the Reds faced around a year ago, when they kicked off a new Premier League season carrying the first-hand experience that 97 points might not be enough to finish first.

The margin for improvement at that level was small, but Jürgen Klopp’s side found a way, increasing their 2018-19 total by two to be crowed champions last term and end a 30-year wait for the title.

A refusal to set limits will be – indeed, has to be – entrenched in the squad again, states the skipper.

“What’s happened in the past is incredible but it’s the past,” says Henderson. “You’ve always got to focus on what’s in front of you and that’s the most important thing.

“For us, it’s about being better. When we just lost the title – not last season, the season before – I can remember the total points was 97 and normally that wins you the Premier League, but on this occasion it didn’t and everybody was saying, ‘Well, where are you going to go from here? How are you going to improve?’ Next season we finish [with] 99.

“So it’s about improving, it’s about being better and you can’t have any limits on that. You’ve just got to keep giving absolutely everything, you’ve got to keep working harder than you ever have before, staying hungry. We’ve definitely got that mentality within this dressing room.”

Henderson’s talismanic influence on this Liverpool team was acknowledged externally with his selection as the Football Writers’ Association’s Footballer of the Year in July.

But, true to form, he considers the award to be one earned by the collective, not the individual.

“I was obviously honoured. It’s a big award, so very honoured to have received it,” adds the England international. “But like I said when I did receive it, I didn’t see it down just to me, it was for the team because no award is won without the team.

“I felt as though it was for us and the incredible season that we had. It does mean a lot, I wouldn’t take that away, it certainly does mean a lot to me and my family. But I also know how much it means to all the lads as well in terms of us as a team and winning trophies together – that’s the most important thing.

“If you do that and you’re consistent and your performance level [is] as we have been for so many years then players are going to win individual awards. But it is down to the team, first and foremost.”

Watch our extended interview with Jordan Henderson on LFCTV GO. Use code 2021GOFREE to start a free one-month trial of LFCTV GO now - this can be cancelled at any time.