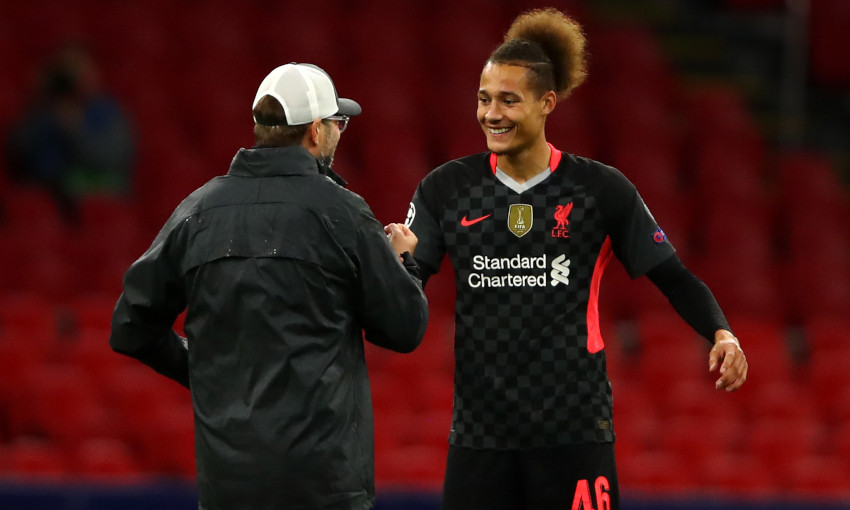 Jürgen Klopp described how he saw the joy in the eyes of Rhys Williams after the 19-year-old clocked up his first Champions League minutes on Wednesday – and the boss challenged the young centre-backs within the squad to grasp the ‘big opportunity’ the injury to Virgil van Dijk has afforded them.

Williams, who spent last season on loan at non-league Kidderminster Harriers, was introduced as a late substitute during the Reds’ 1-0 victory over AFC Ajax in Amsterdam in midweek, adding to his previous two first-team appearances chalked up so far this season.

“Yes, that’s a nice story,” Klopp said during his pre-Sheffield United press conference. “I saw it in his eyes after the game that he was pretty impressed by that occasion and that’s nice.

“He is a big talent – not only big physically, but he is a real talent and it’s nice to have him around.

“That he played last year non-league, that makes it special.”

Williams is one of three young centre-backs who have been involved in the first-team squad so far this term, with Nat Phillips and Billy Koumetio also training at Melwood.

“With the situation, Nat Phillips is here as well and Billy the kid [Koumetio] is here, so these boys are really around,” Klopp continued.

“Nat Phillips, we thought would be a transfer but then in the last second it didn’t happen. Nat, we all know, we brought him back here last year from Stuttgart for one game against Everton in which he did really well.

“These are solutions for us and helps us a lot. The boys are great and it’s a big opportunity for them. As always in life, if something bad happens, when the dust is kind of settled you can see the opportunities again. It’s all about doing the right things in the right moment.

“For Rhys, it was now the first Champions League minutes, which is nice.”