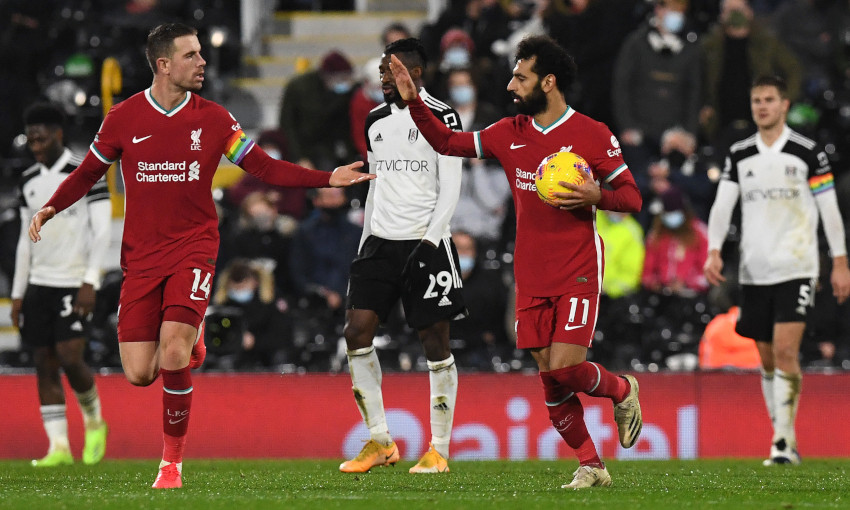 Mohamed Salah's penalty gained Liverpool a point as they came from a goal down to draw 1-1 with Fulham in the Premier League on Sunday.

A fierce finish by Bobby De Cordova-Reid on 25 minutes had handed the home team a lead their first-half ascendancy more than merited.

But the Reds improved after the interval and eventually hauled themselves level from the spot, Salah converting following a handball to ensure it ended with one point apiece.

Alisson Becker returned to the Reds’ goal after missing the previous three matches, while Alex Oxlade-Chamberlain was named in the squad for the first time this season.

Diogo Jota, however, was ruled out due to a knee injury that is expected to sideline the forward for up to two months, with Kostas Tsimikas facing a similar fitness situation. 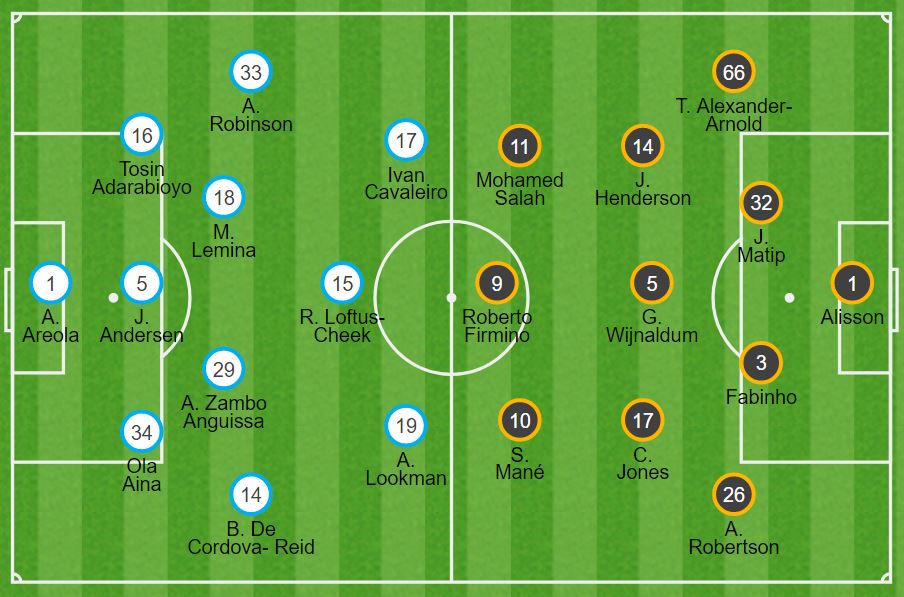 Before the action began, there was a minute’s applause in honour of former Fulham midfielder Papa Bouba Diop, who passed away last month.

Fulham made the brighter start, repeatedly getting the ball forward with urgency as they were vociferously backed by a small crowd of supporters at Craven Cottage.

The hosts broke in behind with just four minutes on the clock, too. Ivan Cavaleiro bore down on Alisson from the right channel and thumped a strike towards the top corner that the Liverpool goalkeeper showed strong hands to deflect.

The same pair duelled again soon after, this time via the opposite side of the pitch as Cavaleiro moved onto Ademola Lookman’s threaded pass into the area. He opted for a lower effort, which Alisson again repelled.

Fabinho halted Cavaleiro’s next foray with a foot in on the byline, but an extended VAR check on a possible penalty ensued. The referee, Andre Marriner, eventually headed to the review area and maintained his original decision: no foul. 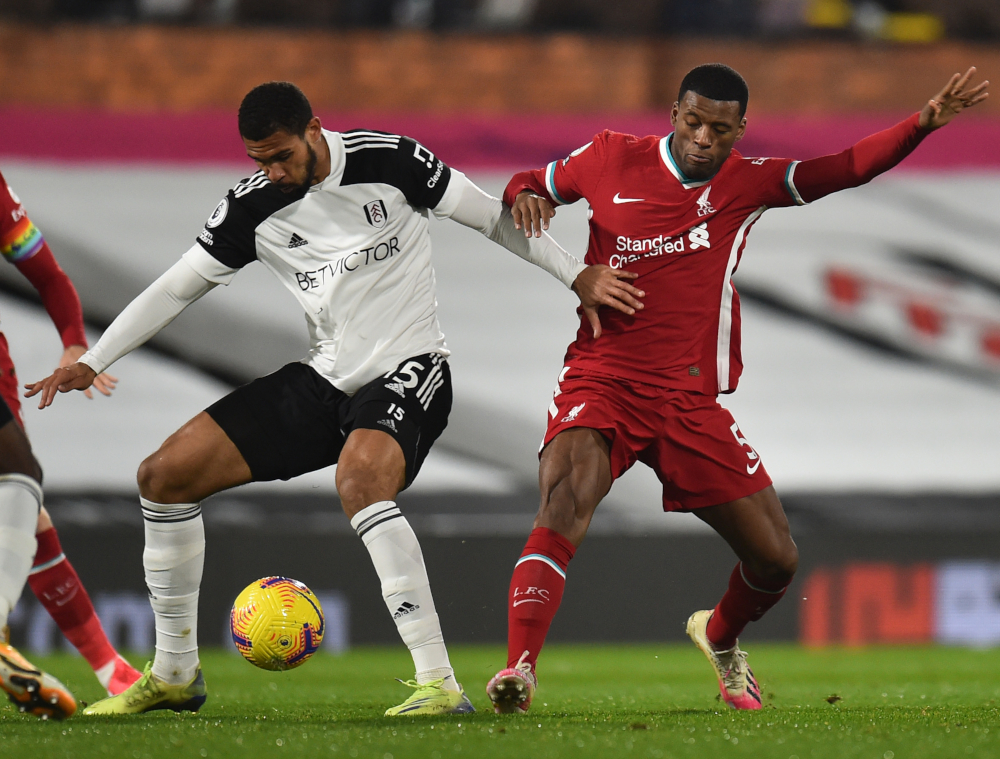 But Fulham’s early pressure told midway through the half.

Within moments of Alisson palming away a low curler from Lookman, the ball came to De Cordova-Reid on the right edge of the box and he swiped a vicious swerver back across Alisson and inside the far post for the opener.

It was a deserved breakthrough for Scott Parker’s team and Liverpool would only begin to trouble their opponents in the closing moments of the half.

Sadio Mane could not keep a header down when picked out in the box by Curtis Jones and Salah flashed a hit wide after spinning on Trent Alexander-Arnold’s square pass.

When the visitors emerged for the restart, Takumi Minamino was introduced from the bench in place of Joel Matip, meaning Jordan Henderson dropped into central defence.

There was action at either end within a minute of kick-off.

Andy Robertson’s attempted clearance in his own six-yard area struck Cavaleiro and had to be kept out by Alisson, before Salah’s rising drive from 20 yards was thwarted by Alphonse Areola.

Liverpool had immediately established a much firmer foothold in the game, nevertheless, and long periods of pressure in the Fulham half followed.

Klopp’s men sliced through the hosts’ backline on the hour when Roberto Firmino nudged a clever pass through to Henderson in the box. The captain tried to plant a side-footer off his left boot into the net but Areola denied him. 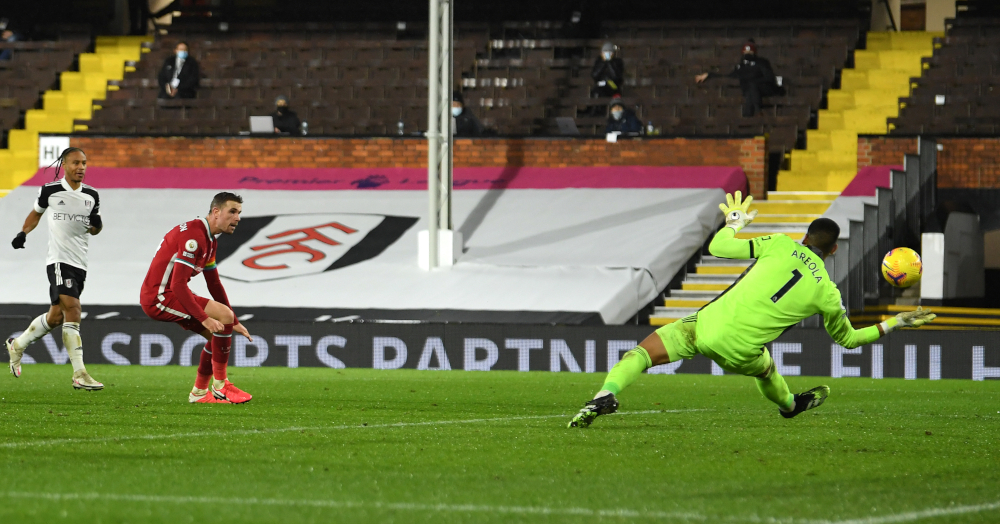 The Reds finally levelled in the 79th minute.

Georginio Wijnaldum’s attempt to convert a free-kick from just outside the area collided with an arm in the opposition wall and the referee immediately awarded a penalty.

Salah stepped up to fire from 12 yards and his slightly left-of-central kick evaded Areola’s effort to save and restored parity on the scoresheet.

Then, Jones almost single-handedly completed the comeback, embarking on an excellent dribble from inside his own half that carried him to the Fulham box. His low punt across the ‘keeper was stopped, though.

And there were to be no further changes to the scoresheet, meaning a point apiece at Craven Cottage.