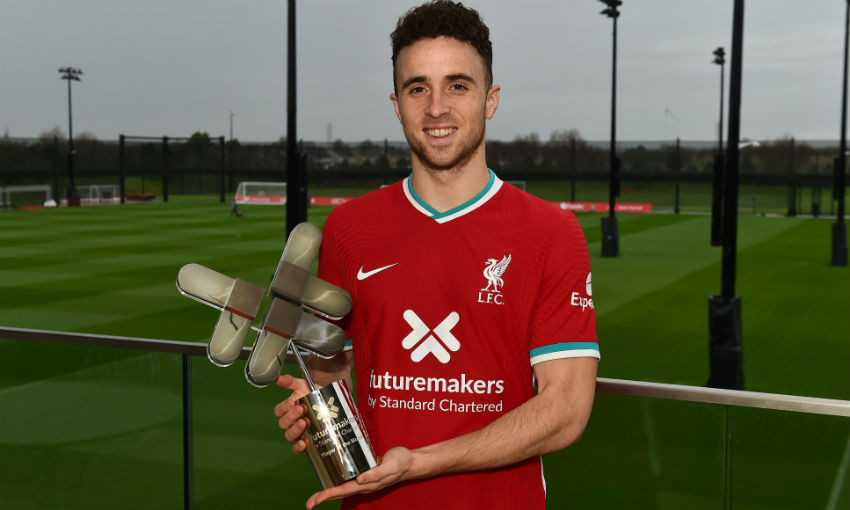 Diogo Jota has been voted Liverpool's men's Standard Chartered Player of the Month for the second time in a row.

The Portugal forward bagged five goals in as many appearances for the Reds during November, including a Champions League hat-trick against Atalanta BC.

That treble of excellent finishes in Bergamo marked the beginning of his productive haul in the month, which was added to in the Anfield win over Leicester City with a clinical header.

Jota was also on target at Brighton & Hove Albion, where he netted after an incisive dribble into the opposition box and precise low finish.

And that form saw the No.20 retain the Standard Chartered accolade, having collected it in October too, ahead of Mohamed Salah and Andy Robertson in a poll of supporters.

“Well, it just feels like I was doing the things right, obviously helping the team on the field and that was of course the most important [thing],” Jota told Liverpoolfc.com, when asked how it feels to win the award again.

Was his personal highlight of November that clinical hat-trick in Italy, then?

“I think it has to be. Of course, a Champions League hat-trick is not every day and it’s a night to remember for a long time,” the 24-year-old replied.

“If I need to choose one moment during November, it has to be that one.”

Jota has missed Liverpool's last two games due to a knee injury and admits he finds it difficult to watch, rather than play.

“Playing in the Premier League is not easy and we have been struggling a little bit away from home, but let’s hope that we can correct that straight away because that would make a massive difference in the table,” he said, of the champions’ December form so far.

“But we are still top of the league and the last game was very, very good. I was there watching – from the outside it is never easy but I think we played really well and we were deserving the win that was not happening until the last minute almost. So I think we are doing things well and we just want to keep on going because in the end we will have reasons to celebrate.”

D I ⚽️ G ⚽️ J ⚽️ T A The best bits from November's @stanchart Player of the Month 😎 https://t.co/PQjxfMAYEU

Jota was presented with a unique ‘Futuremakers’ trophy to help raise awareness of Standard Chartered’s charity, which aims to help disadvantaged young people around the world get back into education, training or employment.

The Reds’ main partner had swapped its logo on the front of the team’s jerseys for the Premier League meeting with Leicester during the month to ‘Futuremakers by Standard Chartered’ – as worn by Jota to collect his award.

It was the ninth time the bank had made the switch for a Liverpool game and those limited-edition shirts were subsequently signed by the players and auctioned off to support the initiative, with Standard Chartered matching every dollar raised.

And fans now have a special chance to bid on the trophy presented to Jota, which he also signed, and support the charity – visit https://www.charitystars.com/diogojotaplayerofthemonth for more details.

For more information on Futuremakers by Standard Chartered, click here.

Standard Chartered Player of the Month 2020-21