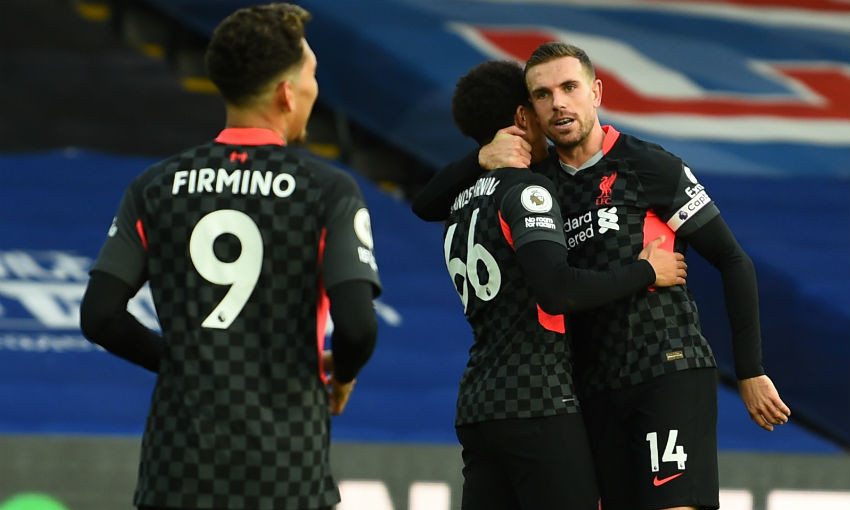 Jordan Henderson felt Liverpool delivered the kind of scoreline that had been on the cards in routing Crystal Palace 7-0.

A brutally efficient performance from the champions saw them run out comprehensive victors at Selhurst Park on Saturday, with Henderson – who guided in number four with a fine finish – getting on the scoresheet.

Clinical strikes from Takumi Minamino and Sadio Mane put the Reds two goals to the good, before Roberto Firmino concluded a devastating counter-attack on the stroke of half-time.

Jordan, there was some tremendous finishing from Liverpool today…

Yeah, I thought we were ruthless today. We took our chances which is always important, dominated the game for large periods. I still thought we could do [better], we were a little bit sloppy at times. But overall I think we’ve got to say we’re delighted with the performance and the result because we know how difficult it is to come here. They are a good team, they make it difficult, so to finish this week off with a win after midweek is important and we managed to do that.

Yeah! It was coming, I felt, because over the last few games we’ve had some chances and haven’t taken them and it’s cost us at times. But today we managed to finish our chances, which is always important in football.

Was that your best team performance of the season so far?

In certain ways but we don’t just look at the scoreline. It’s a big scoreline but we look at the overall performance. I thought midweek we were very good and again we were good today, so we’ve just got to keep the momentum going, keep focused, keep working hard and keep going. Christmas is a difficult period for everyone so we just need to keep going and keep picking up the wins.

It’s interesting that you can use the word ‘sloppy’ when you’ve just won 7-0, but there were a few moments in the first half…

Yeah, and in the first half they had one or two half-chances, a little bit on the counter-attack. I mean, they’ve got some good players on the counter-attack so they’re always going to create something in a game of 90 minutes but I thought we limited that today very well, especially as the game wore on. Then we managed the game well in the second half.

Which goal was best – yours, number four, perhaps?!

7 - Liverpool registered an away top-flight win by a margin of seven goals for the first time in their history, whi… https://t.co/M8fbuHmuq6