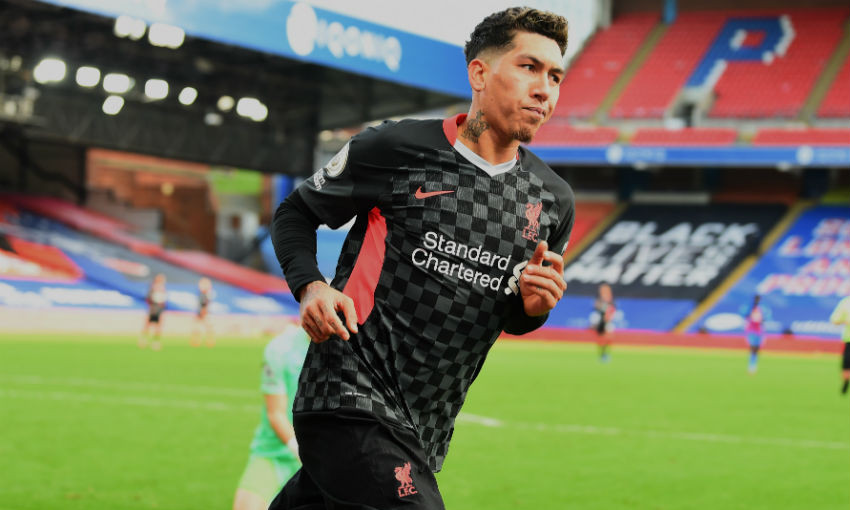 Liverpool produced a stunning display to beat Crystal Palace 7-0 away from home in the Premier League on Saturday lunchtime.

Roberto Firmino and Mohamed Salah bagged braces in south London as Takumi Minamino, Sadio Mane and Jordan Henderson were also on the scoresheet for the Reds.

Here are seven talking points from the match...

Top of the tree at Christmas

Three points in the bag means Liverpool will spend Christmas Day on top of the Premier League.

It will be the third year in a row Jürgen Klopp's side have been in first place on December 25.

They confirmed their status as the current league leaders with truly sublime goals at Selhurst Park.

"Today they obviously all wore their finishing boots it looked like," Klopp assessed afterwards.

Perhaps the finish most pleasing on the eye was the third – a vintage back-to-front Liverpool move.

Trent Alexander-Arnold clipped the ball to Firmino from his right-back position before the recipient switched play to Andy Robertson on the left.

Robertson advanced and then fired in a perfect pass into the box that was guided into the back of the net by Firmino's poke following his lung-busting run.

Continuing the theme of stunning goals, Henderson then curled in a beauty from outside the area early in the second half.

Not to be outdone, though, Salah's second was a beautiful bending effort from distance that found the top corner, leaving the goalkeeper with no chance.

Where do you even start?

The result was the first time the club had ever registered a top-flight away win by a margin of seven goals.

It also happened to be Klopp's 127th victory in the league, which saw him overtake Rafael Benitez to become the Liverpool boss with the most wins in Premier League history.

Making it 7-0, Salah scored Liverpool's 600th goal in competitive matches under Klopp. That total arrives after 288 matches in charge – fewer than any other manager in the club's history.

All of the Reds' goals on Saturday were assisted by different players – making it the first time in league history that there've been seven different assisters for a team in a match.

And Mane, meanwhile, grabbed his customary goal over Palace – making a nod to supporter Lee Swan with his celebration. With 10, the speedster is the top-scoring player against the Eagles in Premier League history.

Connection in the final third

Looking at the scorers and those that assisted, it's worth remembering Salah only played 33 minutes of the contest.

Starting on the bench, with Klopp mindful of his recent workload, the No.11's first major involvement saw him lay on an exquisite through ball to Firmino.

Salah's forward partner was through on goal and proceeded to delicately chip the ball over goalkeeper Vicente Guaita.

That pass was the 17th occasion Salah and Firmino have combined to score a Premier League goal for Liverpool.

Only Robbie Fowler and Steve McManaman have combined for more goals for the club in the competition with 24. We're all expecting their lead to diminish between now and the end of the season.

Out of the blocks

"Don’t let us waste the first half again!" shouted Georginio Wijnaldum prior to the Tottenham Hotspur win in midweek, according to Klopp.

Liverpool followed that order at Selhurst Park to devastating effect. They needed just 125 seconds to establish a lead.

That is the club's fastest goal away from home in the Premier League since November 2014 – when Rickie Lambert netted after 90 seconds coincidentally at Palace.

There is evidence to support Wijnaldum's plea: Klopp's men have now only lost one of their last 94 top-flight games when scoring the first goal.

Exactly one year after signing on the dotted line for the Reds, Minamino marked the anniversary with his first Premier League goal.

With barely two minutes on the clock, he displayed the poise and ability that saw Liverpool prise him away from Salzburg.

Receiving Mane's pass inside the box, the No.18 faked a first-time shot to create space for himself before then delivering an emphatic finish into the bottom corner.

In doing so, Minamino became just the seventh Japanese player to net in a Premier League fixture. 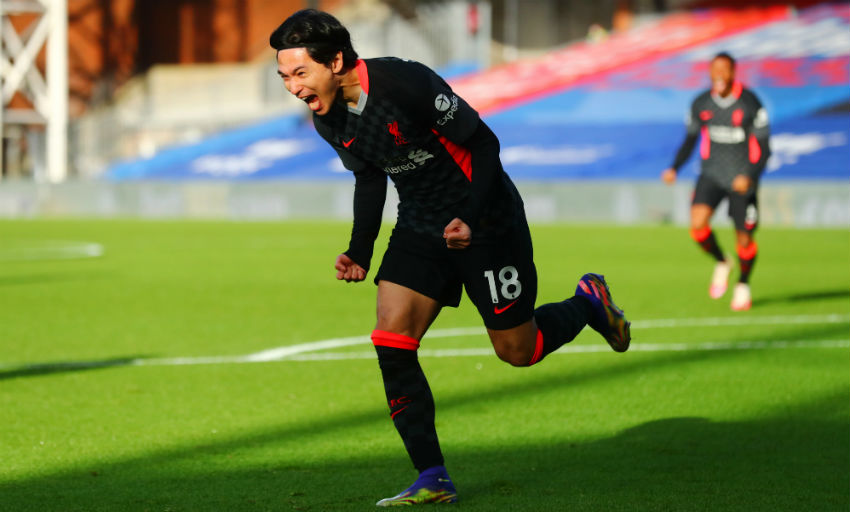 Determination and fine end product came from Robertson to provide the assist for Firmino's first breakaway goal. It's not the first time we've seen that from the No.26.

Since August 2018, only one player in the Premier League has racked up more assists than Robertson. The left-back's tally of 28 puts him one behind Manchester City playmaker Kevin De Bruyne.

"I’m happy to contribute and 28 assists I’m obviously delighted with and hopefully there’s many more to come,” Robertson reacted.

Trailing the Scot on 27 is his full-back partner Alexander-Arnold, who added to his total on Saturday by laying the ball off for Henderson's strike.

Another positive to draw from the Palace win was Alex Oxlade-Chamberlain's return to action.

"Probably the best sight of all was to see Ox back on the pitch," teammate Robertson declared post-match.

The midfielder replaced Firmino with 15 minutes remaining, marking his first appearance of the season. The No.15 had been sidelined since suffering a knee injury during the pre-season training camp in Austria.

But he came on to make an impact when he played the pass for Salah's curler late on.