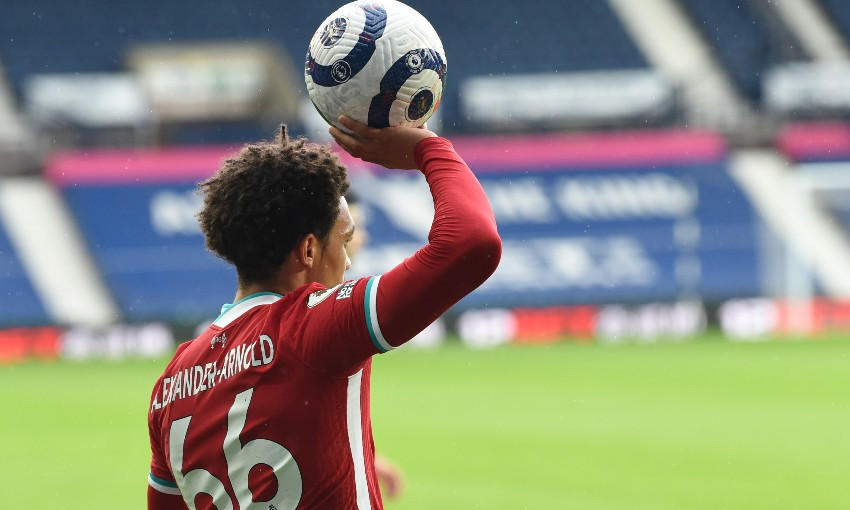 Trent Alexander-Arnold's quality from set-pieces should not be taken for granted according to Jürgen Klopp, who lauded the right-back's 'world-class' assist for Alisson Becker's goal.

Liverpool’s No.66 once again delivered decisively from a dead-ball situation on Sunday as his perfectly arced, 95th-minute corner was glanced into West Bromwich Albion’s net in unforgettable fashion by goalkeeper Alisson.

And ahead of the Reds’ trip to Burnley on Wednesday, Klopp said: “This was a world-class corner; not the first [and] hopefully not the last of Trent.

“Nat Phillips could have scored if he would have left his eyes open, probably. If Ali had missed the ball, I think Sadio was still in a quite interesting position, so that good the corner was.

“True, we shouldn’t take these kinds of things for granted, absolutely right. We saw brilliant players, world-class players, in decisive moments delivering a rather average set-piece because it’s quite common that in the last second of a game that there’s another free-kick or a corner or whatever.

“The corner, the cross made it happen: Ali had only to put his head on it, but he did that quite well as well.”

Alexander-Arnold was named the club’s Standard Chartered Player of the Month for April and has sustained his fine form during May, too.

Klopp continued: “Yeah, absolutely [he has performed well recently] but he played a good season. He had the problem that he played with, I think, around about 20-odd different centre-half pairings, which is just tricky.

“He’s still a young player [and] has a much bigger part in organising the last line than he had previously. That means from a young, world-class talent to a defensive organiser is a step but he did that as well.

“Yes, he is as well in a good moment and long may it continue. For us, it’s very important. Without Trent’s shape - not only his - we would be in a different place, definitely.”