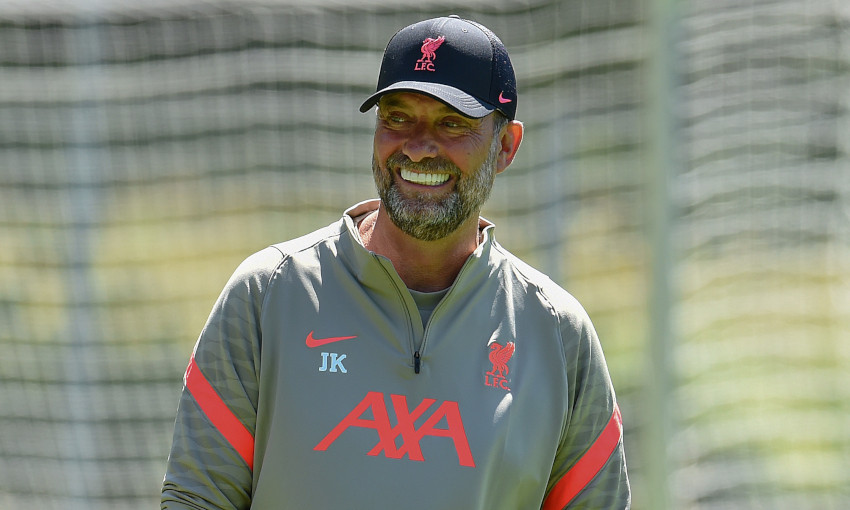 Jürgen Klopp detailed his positive mood ahead of 2021-22 as he outlined Liverpool's objectives and plans for their training camp in Austria.

The Reds manager was counting down the days for his squad to reconvene and begin their preparations for the next campaign, which they did on Monday as they arrived at Salzburg.

Klopp, his staff and the players will now remain together for an extended period over the coming weeks as they lay the foundations for the 10 months of competitive football to come.

Their stay in Austria includes four confirmed friendly fixtures: 30-minute mini-games against FC Wacker Innsbruck and VfB Stuttgart on July 20, an hour-long clash with FSV Mainz 05 three days later, and then a full 90 versus Hertha BSC.

We caught up with the boss for the first time this summer on Tuesday for a chat in which he provided an update on four players returning from injury and discussed the addition of defender Ibrahima Konate.

Read the rest of the interview – on the work to be carried out in Austria, the chance for players to make an impression, and the prospect of fans being back in stadiums – below… 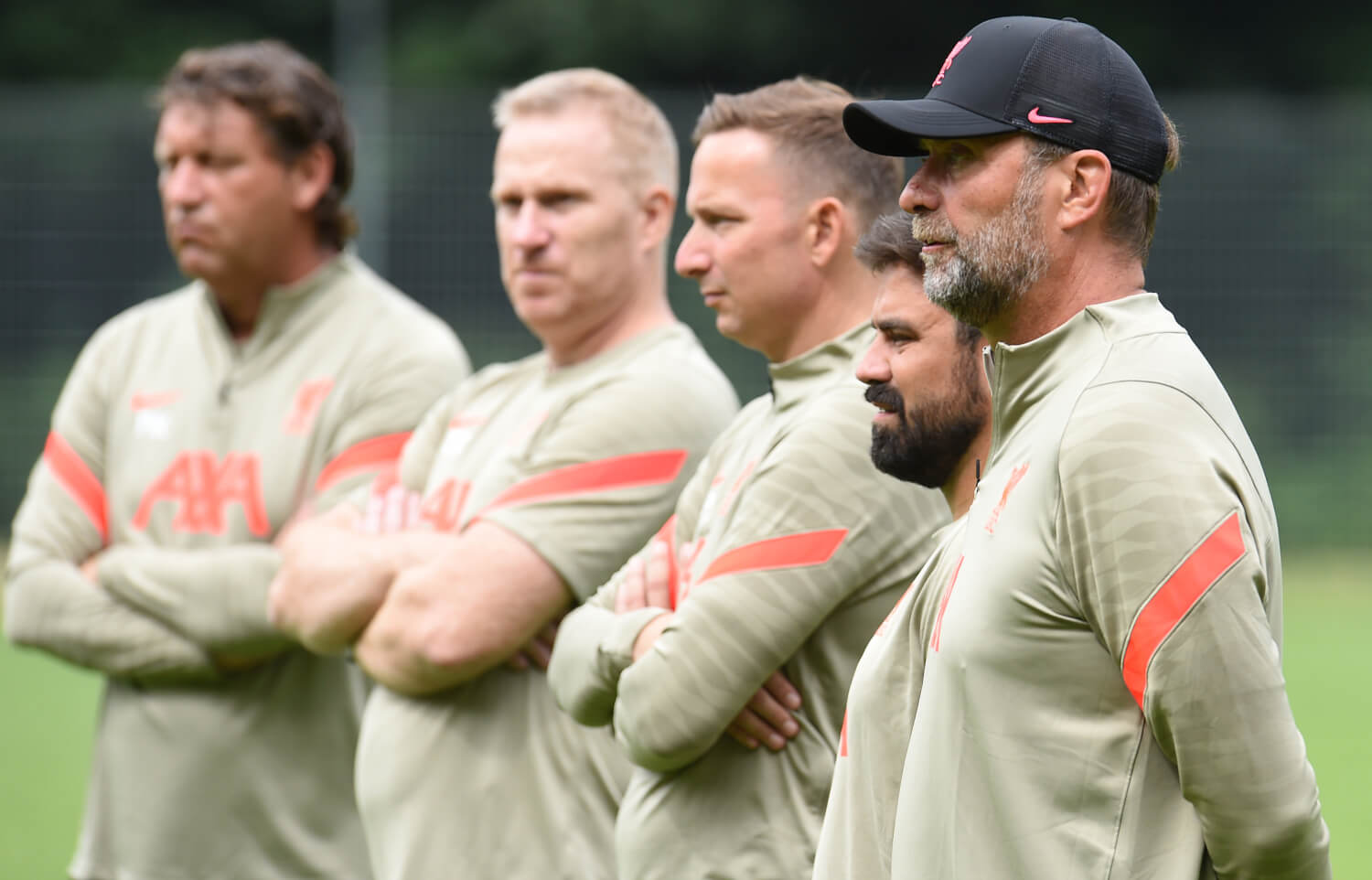 The planning of the pre-season was incredibly difficult. When we left after the last game [of 2020-21] against Crystal Palace pretty much everything for us was kind of settled: we knew what we wanted to do, where we wanted to go and when we wanted to play. And then during the summer break everything changed, every now and then it was really tricky. The job Ray Haughan [general manager – first team operations] did in that time was absolutely incredible, I have to say. We tried to work really close together with the Austrian government here that we can come in, we make sure that we get allowed to come in. That was really important and, thanks to them, we are here. But then was the problem, what can we do when we are here? Where can we go from here? That was not clear. So we had other options in Spain, which is not perfect because of the weather, it’s maybe a little bit too hot.

So we stay now for around about four weeks away and this is really, really strange. I never did that before. It’s different when you play a tournament; for example, some players did that obviously, like Euros or World Cups or African Cups or whatever. It’s clear they have a similar situation but it’s a preparation after a season for a short period. We prepare after a long break for a long season. So the training will be really intense from a specific point of view. It’s now already intense for the situation they are in. So we have to be creative and everybody is responsible for keeping the mood up. I never experienced a situation like that – 28 days is really long. But it’s good as well.

We have enough time to train, we have enough time to talk and when the players from the Euros or the Copa [America] come back we are hopefully able to bring them in without quarantine and these kinds of things. That was all important. That we can be together in the bubble, fly as a bubble together to England [so] that we don’t have to get quarantined there and all these things. It’s a tricky situation, but that’s the reason why we are away for quite a while.

Yeah, I am pretty sure for around four, five or six hours a day when the boys train they are not bored, they are just exhausted probably! Then when you have these kind of things, you just want to sleep in the afternoon – that’s how it is and it is a good thing to do. But then, yes, there are moments when the boys are not entertained by us, let me say it like this, and yes, then you need characters. They all need to step up, I told the boys this morning they are all responsible. Not only the old ones, not only the experienced ones – everybody is responsible for a good mood here. And if there is any issue then come to me, we can talk about it, sort it and then we carry on from there.

It’s special and we will try everything, but then again the pandemic is still around so we cannot just say, ‘OK, go out there for a while’ and stuff like this, do this and that – we have to stay pretty much in a bubble all the time and these kind of things. It is still not perfect, but it’s the best we could get and I am really happy about it. I am really happy to be here, we got great support to do that and now we try to behave as good as possible and train as often as possible to bring ourselves into the best possible shape.

You talked about the intensity, can we talk about rest as well because there are 10 players that will come back from tournaments. How important is it for them – and also the likes of Mo and Sadio, who have played almost non-stop football for three years – that they have got that break away from football for maybe seven weeks during the summer?

Mo had seven weeks, Sadio didn’t because he played for Senegal, so I think he had around about five weeks. But it is incredibly long – they are used to two-and-a-half weeks in the summer. Which, [and] I said it plenty of times, is not enough. But now the guys from the Euros and the guys from the Copa have around about three weeks. They have three weeks, that’s what we can give them and that’s what we will. Then they have not a long pre-season but they didn’t have a long break, so that’s absolutely OK. So they get as long as we could; we squeezed everything out again for them that they can really have the proper rest they need.

But, in the end, it’s about getting a rest, using the rest and coming back and starting again with all you can because the next season is around the corner and, to be honest, the last season there’s not a lot of good things to say. But we went through a really tough, tough period and we got through it so that made us, obviously, 100 per cent stronger. A brilliant season is great if you play that and have some success and all these kinds of things, but to deal with it is maybe a challenge and these kinds of things. After the season we had, to get through and finish third was incredible. Now we are all really looking forward to the next season because we are more experienced now – and this experience we should better use.

It’s a big number of players you’re working with at this stage. You’re always very relaxed about that and never in a rush to make decisions on players that you have, but would you expect some of them to move out on loans or maybe permanent moves, some of the players we see at the moment? 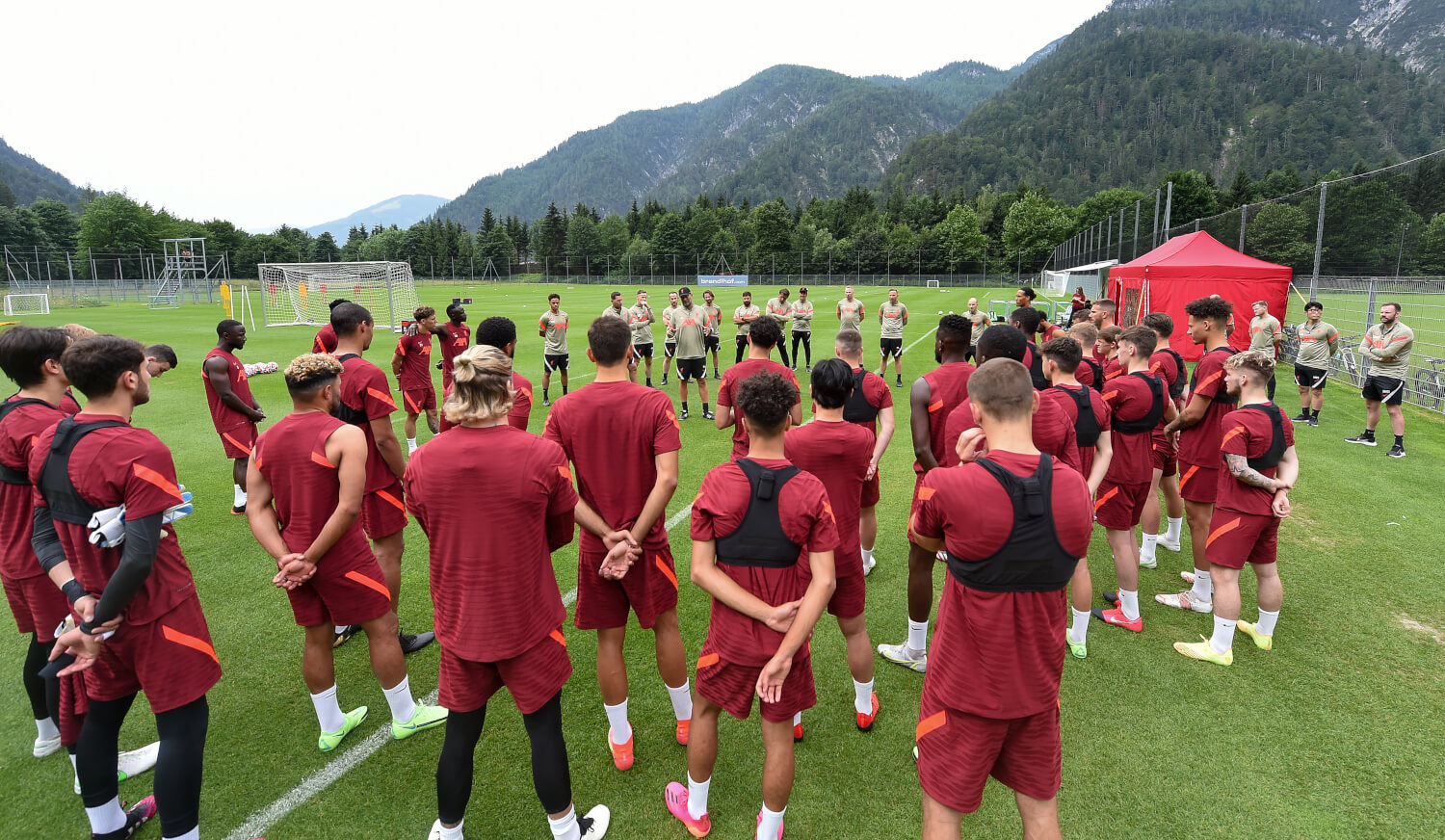 I don’t know. With a few of the younger ones, maybe we have to think about going out on loan, stuff like this, is it the right moment? There’s no final decision yet. These first few days, it’s not the time to think about that because that’s the moment when they all can show up. I prefer to get positively surprised of some of the boys where I think, ‘Oh my God, I didn’t expect him being that close already.’ We have so [much] movement in the squad if you want, there’s so many players who could step up – for different reasons, the last season was maybe not theirs but that doesn’t mean from now on it will always go backwards.

No, there’s a chance to make the right steps in the right direction. They were close to the first team but didn’t play often enough. So, the door is open. A lot of midfielders not here, so come on, take the chance and play the best football you are able to do and then we immediately get options – it’s always like having new signings. I’m really not in a rush about that. If somebody wants to leave, he can come to me and can tell me and then I think about it. Nobody came so far, so obviously no rush from the players’ side as well. The market anyway is a really calm one in the moment, I think. There was [Jadon] Sancho and maybe somebody else, OK, Konate we did that early, but it’s a really calm window. Let’s see what happens and all of these things, but in the moment, everybody has the chance to impress me and I hope they do.

Just finally, are you a bit like us in your thoughts drifting already to Anfield next season and seeing everybody back there?

Absolutely. Honestly, my last impression was one of the best I ever got in my life. The 10,000 against Crystal Palace felt like 150,000, so thank you again for that – whoever was there, well done.

Yes, I can’t wait to have this. That was the best thing I saw around the Euros. We can talk about the football at the Euros, about a lot of things, but seeing the people in the stadium, it was really great. When you hear now about some changes and stuff like this, opening up here and there, I just hope we as a society are thoughtful and maybe sensible enough to deal with that freedom in the right manner. If we do that, I think we have a good chance to get through this period and not only to get stadiums full again, but other venues as well – like concerts and stuff like this. I heard Elton John is at Anfield next year – I’m probably not there then but I hope it will be a fully-booked, sold-out Anfield and that would be really great, like theatres, cinemas, pubs, all this stuff. We all want that, we all need that but I think we still have to be quite disciplined and then we will get there.