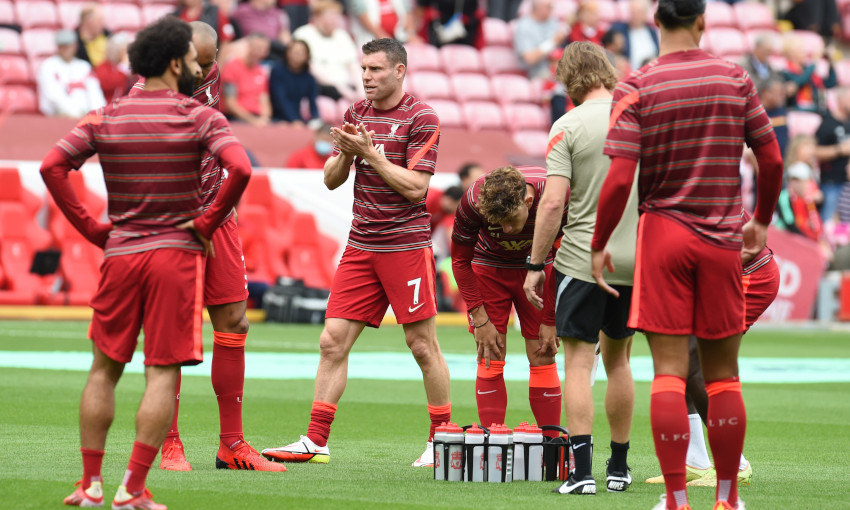 Jordan Henderson: If we don't set the standards, City will do it for us

Jürgen Klopp has a decision to make at right-back when Liverpool host Manchester City in the Premier League on Sunday.

The manager confirmed in the build-up to the Anfield showdown that Trent Alexander-Arnold will not be involved due to the muscle issue that prevented him from playing in Tuesday’s 5-1 Champions League win at FC Porto.

Reds vice-captain James Milner replaced Alexander-Arnold in Portugal and is one of the options being considered in the position for the visit of his former club.

“We all know Millie is a really special, special guy. He hates the position, pretty much – but for that, he plays not bad!” Klopp told Liverpoolfc.com on Thursday.

“But we have obviously Joe [Gomez] as well an option, Neco [Williams] is back now after injury and all these kind of things. I didn’t really think so far about the line-up. We have important sessions.

“Today was only second-day recovery for the boys who played at Porto, so tomorrow and the day after tomorrow will be really important to just get a feeling who is in the best shape, who can face City.

“Now, when I go home obviously, we do the analysis about City. We played them quite often but anyway you need to have a look if they changed something or not, and if they didn’t change, how they do it in the moment. It’s always interesting.

“I like when I have a little bit of time to prepare it; if you play Wednesday and Saturday, for example, it’s just recovery and go again. Now we have these two days more, which is really good – for both teams obviously – and let’s give it a go.”

For City, meanwhile, Ilkay Gundogan and Oleksandr Zinchenko have been ruled out of the 4.30pm BST kick-off at Anfield.

Pep Guardiola reported no other injury concerns following his team’s Champions League exertions in midweek, which resulted in a 2-0 defeat at Paris Saint-Germain.

Ahead of the first meeting of the season between the sides who were occupying the top two spots in the Premier League coming into the weekend, Guardiola discussed his battles with Klopp in recent years.

“This is the reason why we’re still in this business. Some managers make a challenge to make you step forward.

“We did it in Germany when we tried to face each other. Here in England we are many years together, in many competitions and we face many times. Sometimes we win, sometimes lose, but it’s nice because both teams have the same idea – score goals. They are quicker than us but we both try to win the game.”