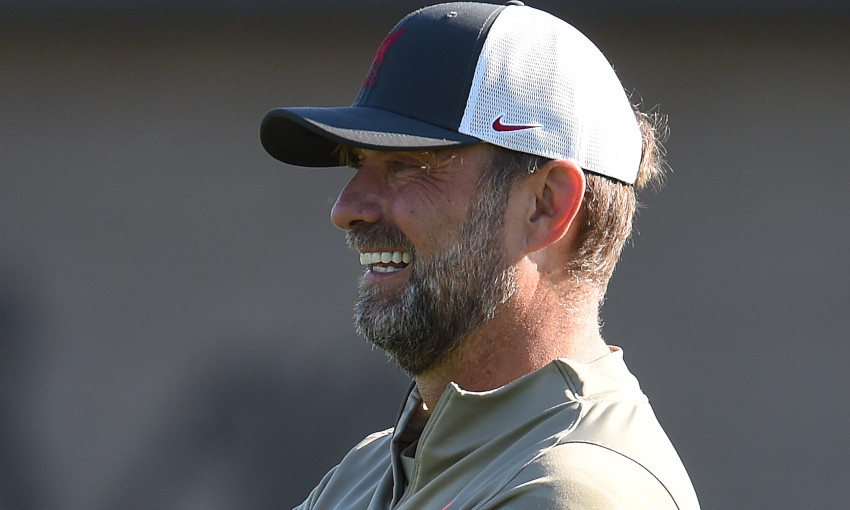 Jordan Henderson: If we don't set the standards, City will do it for us

As they clinched a 1-0 victory at Chelsea last weekend, Pep Guardiola’s team prevented the hosts from registering a shot on target and claimed almost 60 per cent of the possession.

Klopp was asked specifically how City make it so difficult for opponents and what his side have to do at Anfield to avoid similar circumstances.

“First and foremost, the best way to defend is to keep the ball, that’s what City are doing pretty well. They have big possession numbers, stuff like that,” began the Reds boss.

“Then they have an exceptional counter-pressing impulse, which helps as well; if you lose the ball then you win it back pretty early, that helps as well. On top of that, they have different possible organisations obviously.

“Against us especially, they played, or defended at least, very often in a 4-4-2, even when it was a slightly offensively different system, which helps as well in the specific areas to close an opponent down.

“On top of that, they have exceptional individual quality in different positions, which helps as well with defending. On top of that, if you don’t have a shot on goal then the goalie is not that massively influential, but if you get through there’s still a world-class goalie.

“So, that makes it a really interesting mix, I would say. That’s why City won quite a few Premier League titles and trophies in the last few years – because they are really good. And it’s a clear idea, it’s a clear structure, with some changes from time to time.

“I’m not 100 per cent sure but I think last year, or the year before, they started defending in a 4-4-2, De Bruyne pushing up, stuff like this. Before that, they didn’t do it like it. Let’s see what they do this year.

“Not only us have a day or two more to prepare the game, they have it as well so let’s see what Pep is doing. We will see. But the main thing I think is to keep the ball as long as possible, that gives the opposition team no chance to finish any kind of situations off because you don’t have the ball.”

Liverpool were in prolific form during September as they racked up 20 goals in their six matches in all competitions, netting a minimum of three per game.

Their highest tally came in midweek with five plundered past FC Porto to give the Reds two wins out of two in Champions League Group B.

On the reasons for his side’s scintillating form in front of goal recently, Klopp said: “It’s a package, it must be the package.

“The pre-season helped massively, all the players who were involved in the pre-season. That helped so far and it will help in the future in the rest of the season.

“I spoke plenty of times about how essential it is that we can create a basis and a physical basis as well. That’s what we could [do]. In the moment, apart from Brentford, we are quite stable defensively, which means that’s stable because we work really together as a defensive unit and offensive players defend. If we have to defend deep, we defend deep. If we can press high, we do that high. And all these kinds of things.

“It’s clear again what we do because what I said about last season, we had the problem that we lost of course rhythm by losing the centre-halves and playing midfielders in the last line, all of a sudden nothing was like it was before. What we did before was obviously really good, that’s why we won the league in the way we did it.

“And all of a sudden, in the middle of a season, you have to reinvent your game. That takes time obviously, we needed that time to adapt to our now-existing qualities and it took time. But now we stepped not back to what we did before, I’d rather say a little bit more aside, we changed as well some things. But we are much closer to what we did before than we were last year.

“But, to be honest, people told me now that we scored 20 goals in September or whatever – it didn’t feel like. It really doesn’t feel like. I have a lot of chances – and I’m really positive – but I have a lot of chances in my mind which we missed. It’s not about that I want us to score 40 goals or whatever, it’s just that we are not even close to what we think is exactly like it should look.

“Just take it game by game, play as good as possible on that day, analyse it, use the information we find in the analysis, and carry on.”