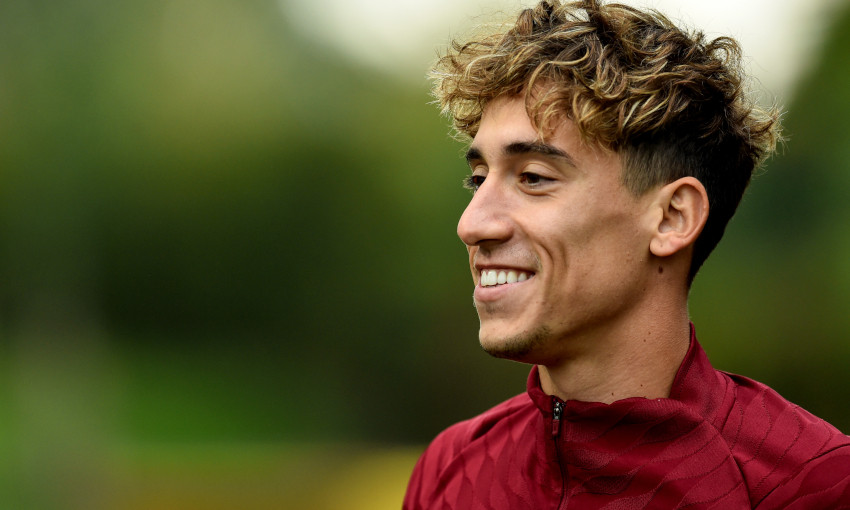 Watford 0-5 Liverpool: How it unfolded at Vicarage Road

There has always been a bit of Liverpool in the club's 'Greek Scouser'.

Years before a friend coined the popular nickname for left-back Kostas Tsimikas that fuses his home nation with his adopted land – and now accompanies many of his Instagram posts – he grew up in a household of long-distance Reds supporters.

His father and brother, specifically, were the primary followers of events at Anfield, wondering if and wishing that one day a Tsimikas might stride across the turf they saw on television.

In August 2020, Kostas made the family’s dream come true.

After five years and 86 appearances with the Olympiacos first team – via loan spells in Denmark and the Netherlands – the converted winger became Liverpool’s No.21.

“It was a surprise to every guy in Greece because moving to Liverpool is a very, very big step. Some couldn’t imagine it was real,” Tsimikas tells Liverpoolfc.com.

“I am very happy and very proud because all this work I did all these years, it paid off. First of all, I make my family happy because for them it was something really special and something very big. And for me also, and I’m really happy about that.

“It was one of my biggest dreams to play in a big club and it was Liverpool, because my family were big supporters of Liverpool since I was young – my brother and my father. And I make their dream come true. I’m double happy.”

On the ‘Greek Scouser’ moniker, he adds: “I like it when I see the fans call me that, also sometimes I hear them on the pitch when I play the game.

There’s a buoyancy to Tsimikas’ conversation as he fields our questions shortly after a recent session at the AXA Training Centre.

It is, no doubt, borne out of a promising beginning to the 2021-22 season that stands in stark contrast to the challenges he faced during his debut year.

A COVID-19 infection, injury and Jürgen Klopp’s need for stability on the flanks given the Reds’ fitness misfortunes in central defence meant Kostas featured only seven times last term, with three starts.

This campaign, however, the 25-year-old has already played five games – a first Premier League start among them – and showcased his armoury as an attack-minded full-back, including assists against Burnley and Norwich City.

“The first thing I had in my mind when the season started was to play more games than last year,” he explains of his targets coming into the season.

“Always I speak to the manager just to make sure in my mind what he wants from me. I worked hard during pre-preparations in my hometown to come as fit as I can here, to train and to be ready for what the manager wants and be ready if he gave me my opportunity and chance to improve myself and show what I can do on the pitch.

“Last year I couldn’t because I had the injuries and I had COVID also, and the team was in a tough situation. After all, I am very happy because I work hard and I showed I can. I showed first of all to myself I can do everything. And I am very happy for that.”

Adventurous football comes naturally to a player who was always deployed higher up the left-hand side of the pitch until a positional switch at the age of 15.

It was then that a coach highlighted to the young Tsimikas – who had hitherto focused on ‘more offensive players… skilful players’ such as Ronaldinho – his potential suitability to the full-back role.

He listened and he thrived, achieving a senior debut for Olympiacos before his teens were through and departing the Piraeus-based side a Greek Super League champion last year.

“He changed my position because he thought I could play left-back. And after this moment I loved this position and I used to always play there,” recalls Kostas.

“I am very happy with this because at 15 years old he taught me how to play [the position]. I think this position fits me and I can give my best.”

Tsimikas’ early-season game time included a first chance to run out in front of a capacity Anfield crowd since his transfer was completed last summer.

It was a frustrating wait to connect fully with his new supporters but when asked if the eventual experience – versus Burnley on August 21 – was worthy of such patience, his reply is equal parts emphatic and poetic.

“The crowd was amazing, honestly,” he says. “I heard a lot about this crowd, about the people here, but when I went onto the pitch and I played with the full stadium the feeling was amazing.

“When we play in this stadium with a full crowd everybody gives their everything, the crowd pushes us a lot.”

The Greece international is feeling settled and satisfied off the pitch on Merseyside, too.

He found a warm and welcoming dressing room upon his arrival at the club and has become particularly close friends with Adrian, Thiago Alcantara and Mohamed Salah in the squad – noting of the latter, “We built a good relationship, we speak [about] a lot of things together. He is a very good guy, very friendly and he’s helped me a lot since I came here.” 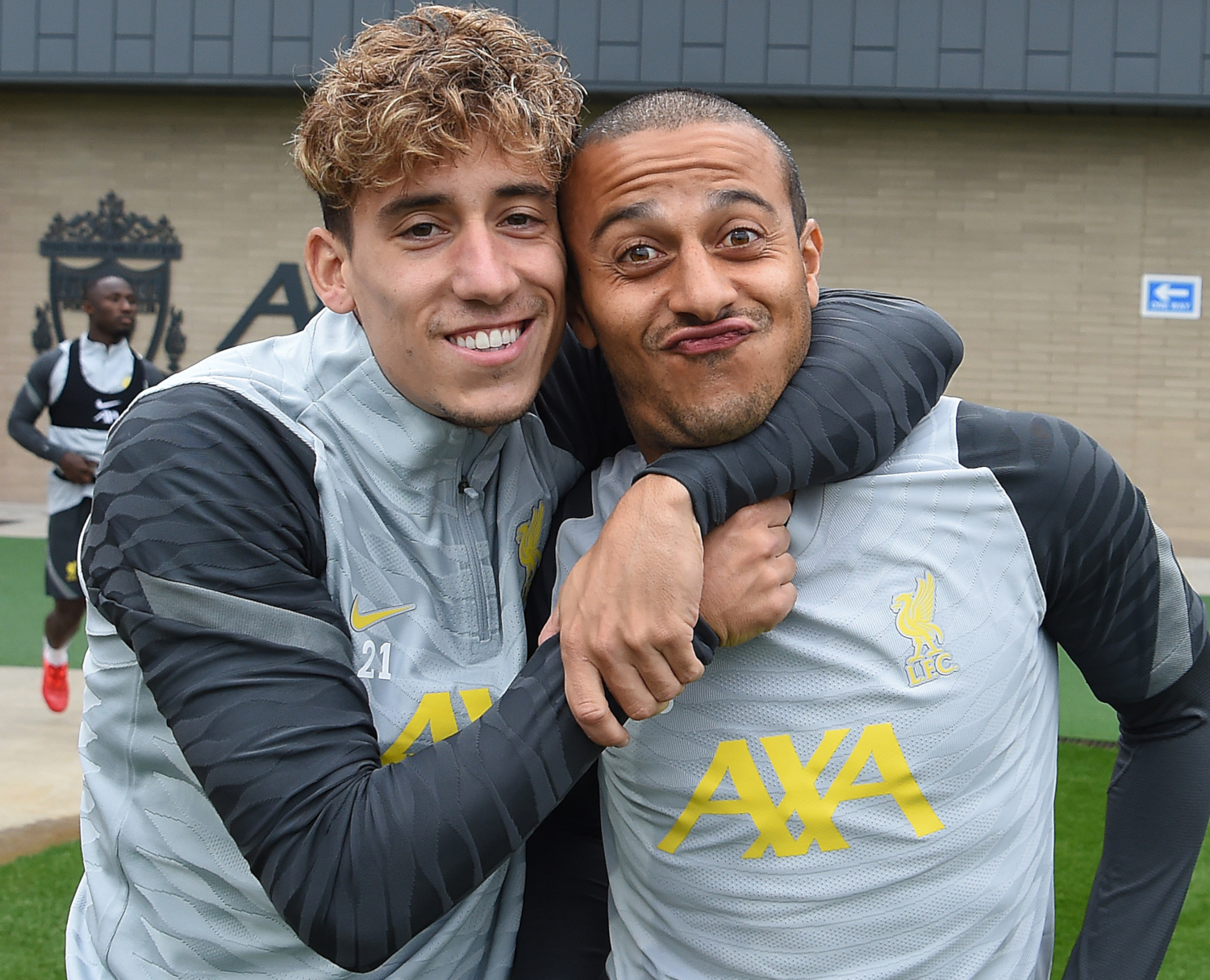 During downtime away from football, Kostas is a keen learner of languages, adding ‘bits of Spanish’ and an understanding of Italian to his fluency in Greek and English.

Fishing is another of the defender’s hobbies, though the unpredictable local weather makes that recreation one to resume during his summer break.

COVID-19 restrictions and protocols have limited his opportunities to explore Liverpool as a city, but getting to know his current home better is high on Tsimikas’ to-do list.

“Hopefully in the future I can go more often to meet people there,” he says.

“Everybody who works in this club is very friendly, everybody helps the players to be in the best condition, they help you with everything. It is very kind from them, always they are looking after you.

“They make you think about only football because they manage everything. It’s very friendly and one of the most important things in this club is everybody is like family, everybody tries to help you.”

So far, so good for the adopted Scouser, then.

But do not doubt the ambitious streak running through Tsimikas’ affable personality. Making it to Liverpool was one of multiple dreams for him.

“I want a lot of trophies with this team,” he states. “Because I’ve loved this team from the first minute here and I want to celebrate with our fans and to win as many trophies as I can. This is one of my biggest goals, to do that.”