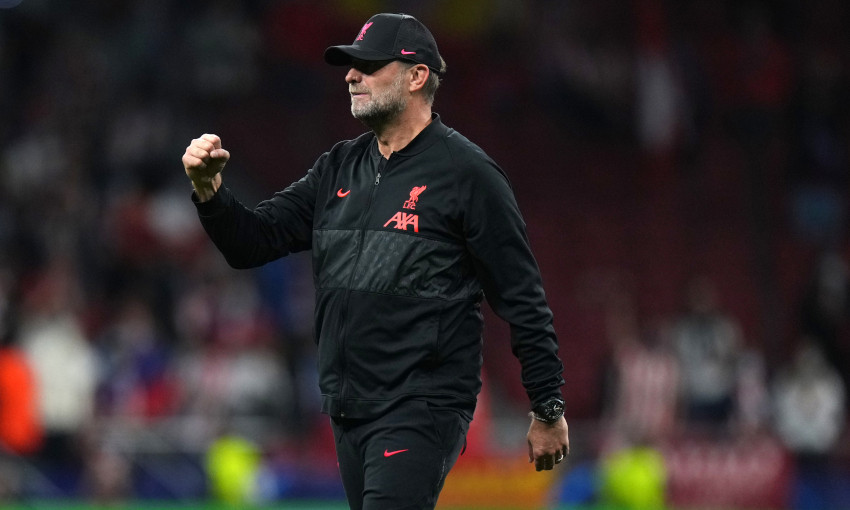 Jürgen Klopp described Liverpool's 3-2 win against Atletico Madrid as 'a real fight' in his post-match assessment of a sensational Champions League encounter.

The Reds raced into a two-goal lead by the 13th minute of Tuesday night’s Group B tie at Estadio Metropolitano, through Mohamed Salah’s deflected shot and Naby Keita’s fabulous volley.

Diego Simeone’s La Liga title-holders fought back to level before the break courtesy of a double from Antoine Griezmann, who was then sent off for a high boot early in the second half.

Salah slotted in a penalty on 78 minutes to restore the visitors’ advantage and after the referee overturned his initial decision to subsequently award the hosts a spot-kick, Liverpool moved five points clear in the group.

On his assessment of a ‘remarkable, dramatic’ game…

Yeah, it was. I’m not surprised about that – when these two teams face each other then some drama I would say is guaranteed. Both teams are proper fighting units, are used to fighting for the things they want to reach, and that’s clear. Of course, the story of the game is a special one because you don’t very often, that easy, go 2-0 up against Atletico after 13 minutes. I said it now a couple of times but it’s still true, the human brain can be your biggest enemy. We misunderstood that situation completely. We wanted to control the game in the wrong way, we played in the wrong spaces and obviously gave two cheap goals away. The set-piece is a nice routine which we knew about so we could have defended it better. And the other goal, I think we all agree: I don’t think we ever conceded a goal like this, that looked really not good. That’s 2-2.

In half-time, I think everybody here in the room and who watched the game thought, ‘OK, Atletico are now on the winning side so that will go in only one direction.’ But we thought, ‘We are still here so let’s give it a try.’ I told the boys at half-time, it’s really positive because we know much more now than we knew before the game about them, we just have to use the right spaces and to play in the right spaces and then everything will be fine. That’s what we tried to do, but then obviously the game got even more dramatic because of the decisions and the things that happened.

I heard it now already a lot of times. Of course I understand that Atletico people or Spanish people are upset or don’t like the decisions, but I think our penalty is a clear penalty. And the penalty for Atletico, in my understanding, is not a penalty. But when he whistled it, I was a bit surprised that they took it back because I only saw it once and I didn’t think it was a penalty, it was clear what they wanted in that moment. And the red card, of course it’s unlucky but I think it’s a red card – you cannot change that, the foot is in the face, that’s what you get red cards for. That’s not cool but it happened. That’s the story of the game, pretty much.

We still had to defend with all we have because even with 10 men they were quite intense to play. But the dirty three points are very often the most important, and they were dirty tonight of course. It was not our best football but we got them and that’s a big step. 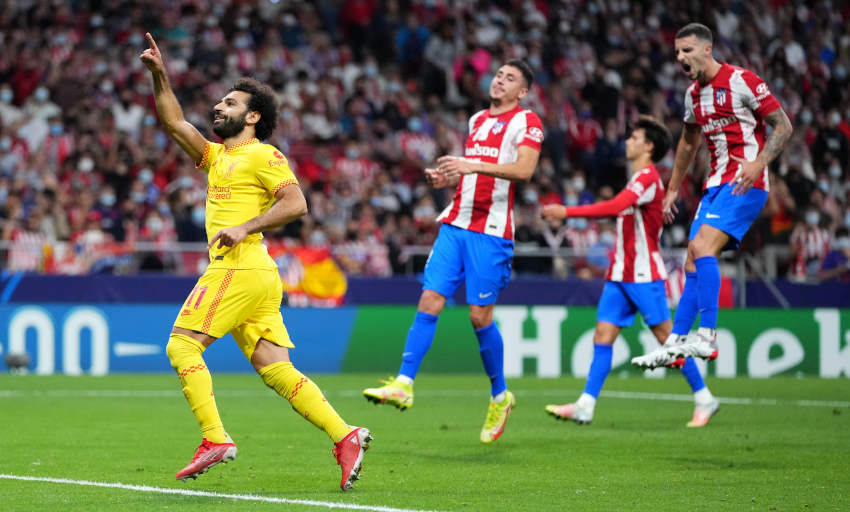 On whether the game is one Liverpool can learn from…

Yeah, absolutely. When you win these kind of games you can say that’s the experience we made in the last 46 Champions League games we played together, around about. But we have quality, we have the quality to finish these situations off. The goals we scored were brilliantly done, really well played – Mo cutting inside, top shot, not sure if it was deflected or not, didn’t see it back yet. Then obviously the other goal, everybody is nearly in a perfect position there and for sure Naby is and a nice finish. Dealing with these kind of situations… the period we are in is really intense. So, would I choose exactly the same line-up again? Not sure. But we had so many things to consider: who is playing that didn’t play, who played where. I think in the end we had too many players on the pitch who played now for their national teams all the games, last Premier League game and stuff like this. There’s never only one reason for things. My boys want always [to play well], that’s what I love most about them. And if they can’t in moments, it’s most of the time my fault. For tonight we fought through it. Experience helped a little bit, but not too much tonight.

On the team’s level of confidence…

We are not that confident, to be honest. We know our struggles, we know our problems but we try to ignore them very often. Tonight, two confident teams played against each other and I’m pretty sure if you would measure the confidence of Diego Simeone and me, I’m 100 per cent sure he would win and for the right reasons. Tonight was just a real fight – it was not about this team, this game. Nobody can win just because he is the better side, no chance. Both teams are real fighters and you saw that tonight. And in two weeks you will see it again. It’s not a game I’m looking forward to, you think, ‘OK, my god, in two weeks again.’ They are a real difficult team to play but we will be there and then in our stadium having an outstanding atmosphere and hopefully we can use that.

On his respect for Atletico’s style of play…

I don’t know exactly what the possession was tonight but even with 11 v 11 I think Atletico let us play, if you saw the same game I did. That’s the way they play and I am not the pope of football! It’s not so important what I say, to be honest. Some things I like in life, some things I don’t like that much but I still can respect them. I respect a lot what they are doing here. I couldn’t do it, I’m not the same guy as Diego. How long is he here? 10 years? Incredibly successful, why should they play the football I like? They play the football they like and that’s all fine.

First and foremost, it was nothing to do with Naby – we just had to defend the right side a bit better. We were a bit too wide, but Naby scored a goal and stuff like this and I spoke to him already. It is really important to me that nobody thinks we played the first half – or the second part of the first half – because of Naby. Not at all, he is in really good shape, but he played three games for Guinea there and the last Premier League game 90 minutes and then today. As I said, 45 minutes I think was absolutely right. Thank you, Ali [Alisson Becker], that you said I said the right things, that’s the plan actually, but I don’t know exactly anymore what I said. What I started with, first and foremost, I was really positive because we knew much more about them than we did before the game; we know exactly where the spaces are, where we have to play, we just didn’t do it and we showed two situations.

Five players at the back, three in midfield and two strikers, more or less not really involved in defending – a little bit, but not really, just there for the counter-attack. It’s obviously then next to the three midfielders there is space and we can play there but from there you have to play in the centre again. We had too many easy passes around the formation and not in or through the formation. It was clear when it went 2-2 I never expected that they would now start chasing us with the ball. They turned the game in exactly the way they wanted to play from the beginning, defending in the right spaces, winning the ball and go for it. They didn’t change, so we had to go back to what we actually wanted from the beginning. That’s what we did.

You could see the intensity of the game, it makes sense you do all the things right, score as many goals as you can as long as you are fresh because later on in a game, especially in an intense game, you will not have the power for it anymore. That’s why we just had to fight through and that’s what we did. This game will not go in our book of the best games we ever played, it will not be part of it, but it was a very important one. [A book of] very important games then maybe it’s in, but not the best games. Winning against Atletico as long as this team is together with Diego will ever be easy, not on one day. We did it anyway and I’m really proud of that.