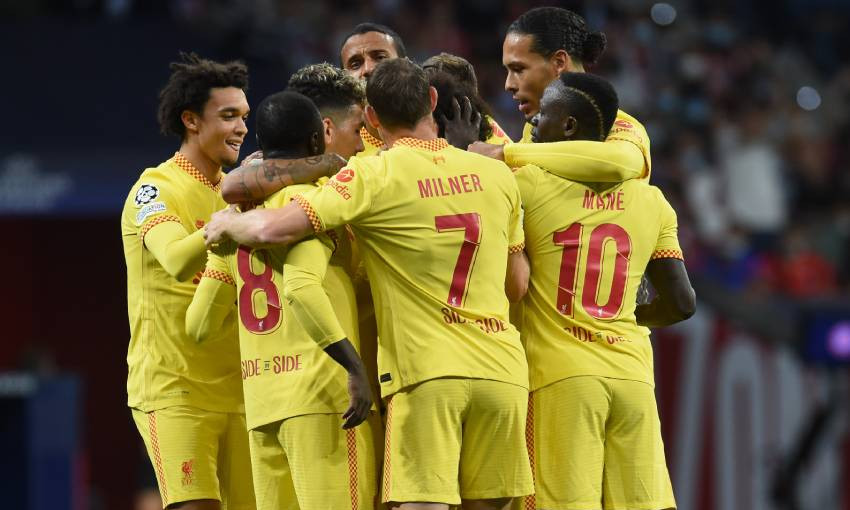 James Milner challenged Liverpool to keep attacking each game with intensity and a winning mentality after their 3-2 victory at Atletico Madrid in the Champions League on Tuesday.

The Reds maintained their unbeaten start to the 2021-22 campaign with a hard-fought result in the Spanish capital, having let a two-goal lead slip before Mohamed Salah's match-winning penalty.

The result sees Jürgen Klopp's side move five points clear at the summit of Group B after three rounds of fixtures, leaving Milner pleased but not entirely satisfied just yet.

Read on for the vice-captain's post-match interview with Liverpoolfc.com...

Well, that was quite an evening and you know you've been in a game...

You always will when you come here. Obviously it's a tough place to come, a well-organised team, difficult to play against, passionate fans, passionate manager. It's not just the football side of things, obviously it's the atmosphere and everything that goes with it. So to come here and get three points is a great day's work.

The momentum shift in that first half was huge...

That's what can happen against good teams at this level in these sort of atmospheres. If you take your foot off the gas or make the odd mistake, you get punished – and that's what happened. Obviously we were in full control, and we made the odd mistake here and there and they get back in it and it was very hard to get that momentum back. But fair play to the boys to be able to do that in the second half. It's not easy then going in at half-time because they feel like they are on the up and obviously we're disappointed with how the first half went in the end. So, to get that momentum back and get the win was pleasing.

A word on the first goal – did you get a touch?

My foot was dangling about! Goals are more important to Mo than me, so it's another special goal for Mo and a great penalty from him as well. Obviously there was a bit of pressure on it. Him waiting, as always now with the VAR to check, makes it a bit more difficult in that atmosphere to score the penalty. I think he's done it before at that end, hasn't he? Same result.

You know as well from taking many penalties yourself, for Salah to hold his composure in that atmosphere and stick it away takes a certain presence of mind...

Yeah, for sure – and that's why we practise them. We practise that and getting in the right mindset, shutting everything else out. Every penalty you take, it's always going to be like that, so you've got to shut everything out. Obviously there is a lot going on but just focus on what you are going to do, and I'm sure he had good memories of taking a penalty at that end as well, so that probably helped.

Everyone knew this was going to be a really difficult group. To be going into matchday four knowing if you win then you're through is a huge achievement, isn't it?

Very good. Obviously there is work to do, nine points isn't enough and we need to make sure we do get over there and winning the group is our No.1 aim. But we're in a great position. It is a tough group – we know that – and we saw tonight what happens if you don't continue. We saw what happened in the first half when we conceded two goals and it turns 2-2. Now we're in a strong position in the group but we need to keep our foot down and keep this run of form going. We've got plenty of games coming up thick and fast, so we need to keep performing and putting in the performances.