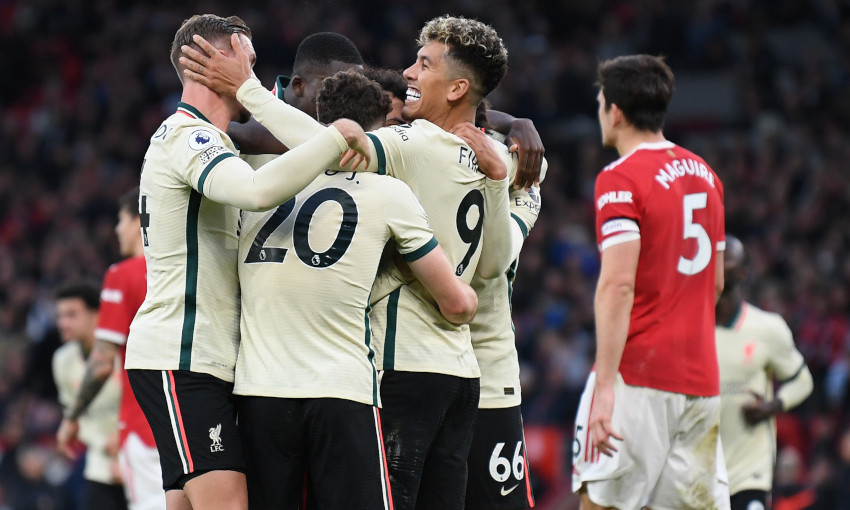 Liverpool produced an awesome away performance to register an unforgettable 5-0 victory over Manchester United.

Indeed, injuries sustained by James Milner, who went down with an apparent hamstring issue, and Keita - who was stretchered off following a two-footed lunge for which Paul Pogba was sent off on the hour - represented the only blemishes on an otherwise flawless afternoon.

The win marks just the second time Liverpool have scored five at Old Trafford, following a 5-2 success way back in 1936, and moves Jürgen Klopp’s unbeaten side up to second in the table.

You're looking at the first opposition player to ever score a @PremierLeague hat-trick at Old Trafford 🇪🇬👑 👏… https://t.co/UDqaERfElj

Ibrahima Konate and Jota started in place of Joel Matip and Sadio Mane as Klopp made two changes from the midweek win at Atletico Madrid.

Fabinho missed out due to a knock picked up in Spain.

The fifth minute may well have proved pivotal to the direction of the match.

United spurned a presentable chance when Bruno Fernandes skewed his shot over the crossbar as an advancing Alisson Becker narrowed his angle.

And, a few moments later, Liverpool led thanks to Keita.

A sweeping move from back to front that began with Alisson was concluded in cool fashion by the No.8, who latched on to Salah’s pass after breaking forward from midfield and side-footed a low finish beyond David de Gea. 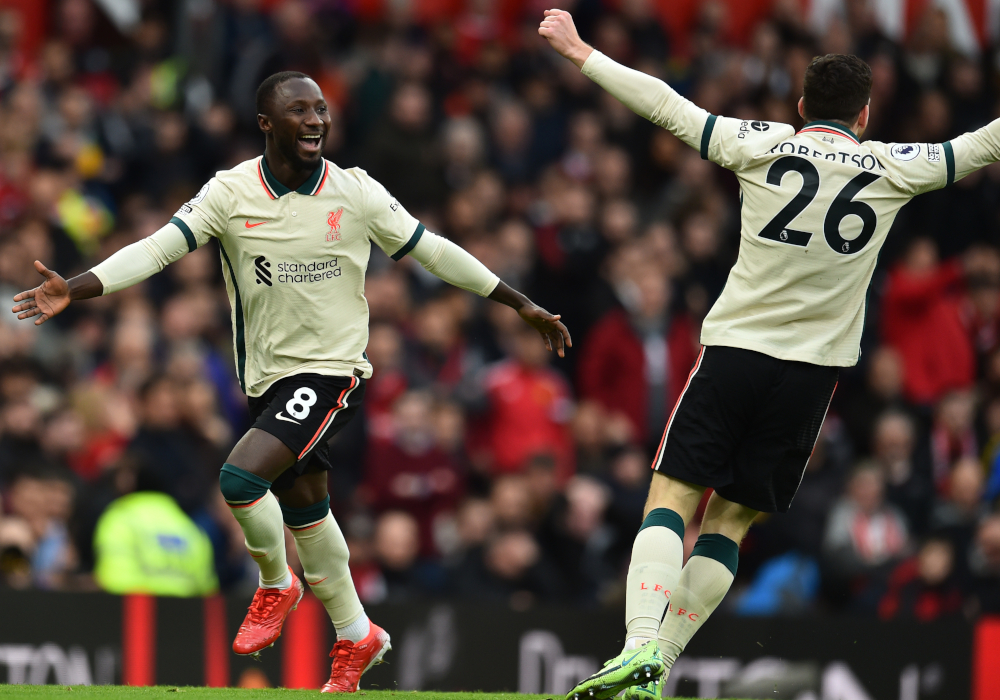 It could have been two almost immediately, as Keita seized possession and played in Roberto Firmino. The Brazilian was forced wider than he would have liked by the ball, however, and his left-footed strike was saved.

But, just as they did in Madrid on Tuesday, the Reds did double their advantage with 13 minutes on the clock.

Keita’s proactivity forced another turnover deep in United territory, with the midfielder duly slipping in Trent Alexander-Arnold, whose low delivery was slid home by Jota.

The only negative throughout a near-perfect half occurred when Milner was withdrawn, with Curtis Jones replacing the vice-captain.

As is so often the case, the game then became the Salah show.

The irrepressible Egyptian stretched his remarkable scoring streak to 10 consecutive fixtures by slamming in Keita’s cross from close range, and he then made it 4-0 in first-half stoppage time by converting Jota’s pass in trademark style via a clinical first-time finish.

It took just four minutes of the second period for Salah to complete his hat-trick.

Jordan Henderson produced a gorgeous, outside-of-the-boot throughball that Salah raced on to prior to clipping a lovely, dinked effort over De Gea.

United were denied what would surely have been a mere consolation soon after when Cristiano Ronaldo had a goal disallowed for offside following a VAR review and the hosts’ misery was compounded further as Pogba was dismissed.

There was an inevitable deceleration to the tempo and incision of Liverpool’s play thereafter, with the visitors allowed to keep the ball at will.

A rising drive by Alexander-Arnold was tipped over by De Gea, before Edinson Cavani contrived to hit the bar from inside the six-yard box to enable the Reds to make it back-to-back 5-0 wins on the road in the top flight.

5 - Liverpool are only the second team in English top-flight history to win consecutive away games by a margin of 5… https://t.co/PiZDcK7Xg1