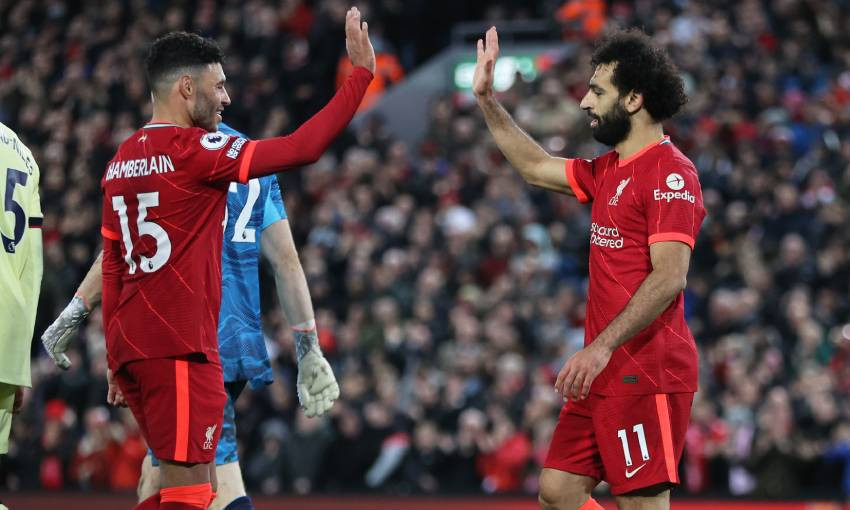 Alex Oxlade-Chamberlain is determined to continue making the most of his opportunities in this Liverpool side after his impressive display against Arsenal on Saturday.

The midfielder has started the Reds' last three matches in all competitions and caught the eye during the 4-0 victory over his former club at Anfield in the Premier League.

Grateful for Jürgen Klopp's faith, the 28-year-old is keen to repay it with outings that help secure more important wins in the future as the squad compete on multiple fronts.

He told Liverpoolfc.com: "I want to play football, I want to play as much as I can. And whenever you get chances, it's up to you to put in a good performance and help the team to win – and that's the only way you keep getting games.

"I've been lucky enough to get those opportunities recently, I've kept my head down, I've worked hard for them, made sure I was ready when the time came. Now it's just looking forward and keeping the momentum, keep helping the team to achieve all of our goals.

"Ultimately, your individual goals kind of work hand in hand with that. If you keep working hard, things fall into place. So, I'll be working hard for that and we'll see what happens."

Read on for the rest of Liverpoolfc.com's post-match interview with the No.15…

After the second goal, that kind of swagger and confidence we associate with this Liverpool side was fully back...

At half-time the manager spoke to us about when we went 1-0 up that we kind of dropped the tempo a little bit and gave them a little bit more possession and joy. So I think in the second half when we went out there, when the goals were going in, it was almost a trigger to not take the foot off the gas. But you grow in confidence and I think we played really mature football at the end, seeing it out and we kept the ball and controlled the game. We just had to stay focused because we know that Arsenal are really good on the counter-attack and we had to always keep that in mind.

How important was it to put in a good performance to give the squad confidence again?

I think that was the most important thing. Obviously we're here for three points and the result, but we know when we perform like that, more times than not the result will go in our favour. I think in recent weeks, the last few games, we haven't performed consistently enough like that for 90 minutes. We've had spells where we've been really good and then we've had spells where we've not been good enough and we've been punished. I think today it was making sure that we did it for 90 minutes and put in a better performance than we have recently. Like I said, the result in the end most of the time goes for us when we play like that, when we've got players in the team like Sadio, Jots, Mo up front that are clinical and Taki when he came on. The most important thing there was the performance, and the three points usually follow.

It was a nice introduction for Taki off the bench, wasn't it?

It's always nice and I haven't had many of them, coming off the bench and nicking a goal straight away. But he deserves that, he's worked really hard, he's kept his head down and he's a great footballer. I think whenever we've seen him playing in the cup, he's clinical and scores goals. I was really happy for him there and I think that one [put] the game to bed completely. I thought he did really well.

You only focus on yourselves but when you look at Chelsea putting in a performance in the early kick-off, you obviously know that the pressure is then on you to keep up with that pace...

You don't want to focus too much on what's going on around you, but of course you can't be naive enough not to look at the situation and where you stand. You've always got that in the back of your mind and that comes with the territory and the pressure of trying to compete for titles. If your competitors go and get a good result, get three points, it's then over to you to go and respond and do the same thing. I don't know if it's added pressure but it just makes it more real what exactly the job and the task ahead is. Of course we were aware of Chelsea's result today and it was crucial for us to get three points, but maybe more so after the last few results – we needed that for ourselves to get back to winning ways and a good performance as well.