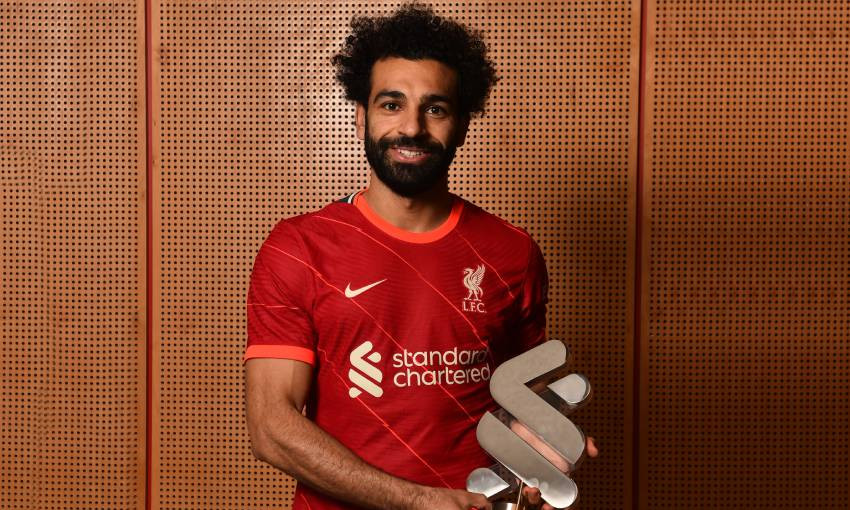 Mohamed Salah has won Liverpool's Standard Chartered Men's Player of the Month award for the third time in a row.

The Egyptian secured October's prize after a fan poll on Liverpoolfc.com, with Alisson Becker and Naby Keita in second and third respectively.

After collecting the accolade at the AXA Training Centre, the No.11 said: "Well, I am happy for the last result.

"As long as the team are winning and getting three points, I'm always happy to help the team."

Salah, who featured in five of the Reds' six fixtures in the month, opened October with sensational individual goals against Manchester City and Watford.

He then bagged a double as Jürgen Klopp's team recorded a 3-2 victory away at Atletico Madrid in the Champions League.

In the 5-0 win over Manchester United, the forward scored three times to become the first-ever opposition player to net a Premier League hat-trick at Old Trafford.

Read on for our chat with October's Standard Chartered Men's Player of the Month...

Of all the goals in October – obviously Manchester City and Watford were maybe the standouts technically – which were your favourites?

Well, I always say City because the game is really big and the result was nearly there, so I would always choose City because of the pressure as well. I think the City one was better than Watford.

Once I get the ball I just try to create a chance or dribble and go past the players. Once I go inside the box, I just try to finish the situation. I knew they always try to close my left foot, so that's why I went to my right foot this time and I think I finished the situation well. At Watford, I did the opposite; I knew they were going to go to the right and I went to the left.

In terms of the City goal, is it up there with the best you've ever scored? Is it the best?

I think what makes it the best was the atmosphere. The game was huge, the fans were so incredible and the noise you hear after the goal makes it more special. I have scored some good goals for the club and I put it up there.

The Watford one was not too long after, so the City one was fresh in your mind. Were you thinking about that when you were in the box? 'Let's do this again…'?

I thought about it, even before the game. Also, once I had been in a situation with the right foot, I thought the centre-back would go to the ground because he'd expect me to do it like in the last game, so I took it to the left foot and I finished it well. I think it was in my mind before the game.

We haven't even mentioned the hat-trick at Old Trafford. How proud were you of that?

Of course, it was a special night to score a hat-trick at Old Trafford, to win 5-0, it was a great result for us and we are so proud of where we are now in the Premier League. We could be in a better situation, but I am sure we are going to do more and try to get into a better position. In the meantime, I think we are accepting the result at the moment and we just need to carry on.

You were the first player in Premier League history to get an away hat-trick at Old Trafford. How proud are you to break those kind of records?

I know you mentioned it at the start but that result against Arsenal at the weekend, the confidence you can take from that is huge…

I think after we struggled against West Ham away it was really important to strike back. I think we played a good game, we had a good result – a very good result. We need to take it from here and think about the game on Wednesday and the one at the weekend.