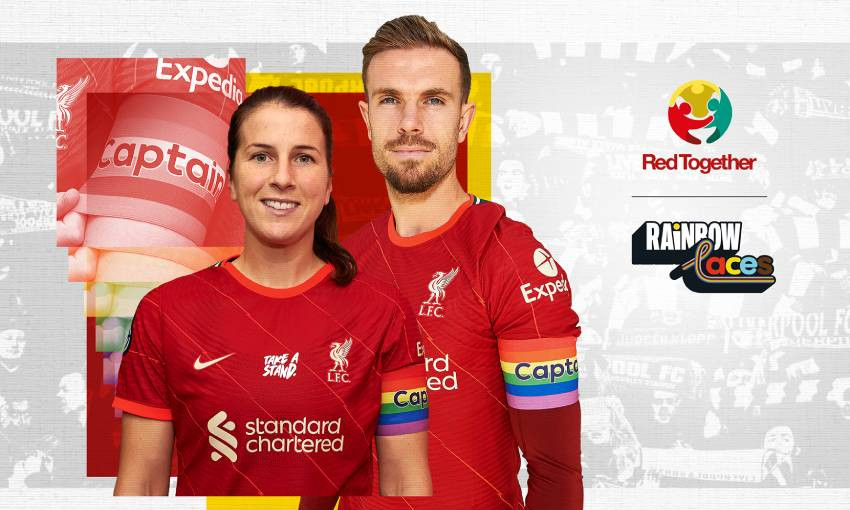 Liverpool FC’s men’s and women’s teams will come together this month and next to show their support to Stonewall’s annual Rainbow Laces campaign.

This year’s Rainbow Laces campaign is called ‘Lace up and Speak Up”, which focuses on opening up the conversation and talking about why the club and its fans support LGBT+ inclusion in sport on and off the pitch.

With the Red Together programme, LFC is committed to providing a welcoming and inclusive environment to all, and continues to instil equality, diversity and inclusion throughout all of its work, both on and off the pitch.

Ahead of this year’s Rainbow Laces campaign, Jürgen Klopp met with LFC Women’s centre-back Meikayla Moore to talk about the importance of LGBT+ awareness and inclusion in sport, allyship, being your authentic self, and their thoughts on how the club, its fans and wider society can collectively work together to ensure that football is a safe space for all.

Jürgen and Meikayla’s Rainbow Laces video can be viewed below, or read on for a full transcript of their conversation.

The Reds’ home games – Southampton on November 27, and Charlton Athletic Women on December 19 – will be dedicated to Stonewall’s ‘Lace Up and Speak Up’ campaign, with captains Jordan Henderson and Niamh Fahey donning the rainbow armband as a sign of allyship and unity.

The initiative will also see Rainbow Laces ball plinths, handshake boards and substitute boards, as well as other matchday activation at both Anfield and Prenton Park.

In addition to matchday activity, the club has this week launched its own Pride scarf, with a share of the proceeds from sales going to the Michael Causer Foundation, a local LGBT+ charity set up to provide education and support to young LGBT+ people aged 16-25.

Steve Macfarlane, chair of the Michael Causer Foundation, said: “We are delighted to have the support of Liverpool Football Club and their stand (with us) against all forms of hate crime. The club’s donation will be particularly valuable in funding our safe haven retreat space for young LGBTQ+ people to have a break when they need it most.”

Internally, Liverpool FC’s inclusion staff network will be continuing with its work to advance LGBT+ inclusion across the club, rolling out training opportunities for staff and working with club partners on specific activity.

The club’s official charity, LFC Foundation, will also be hosting a series of Rainbow Laces-themed workshops across its programmes, as well as dedicated tournaments and fixtures.

Speaking about the club’s support for the Rainbow Laces campaign, Rishi Jain, senior manager for equality, diversity and inclusion, said: “Supporting Stonewall’s Rainbow Laces campaign this year is a vital part of our continued work under our own Red Together programme. This encompasses everything that we’re doing across ED+I internally and externally.

“The theme for Stonewall’s campaign this year is ‘Lace Up and Speak Up’ – it’s a really important message that’s not just about wearing the laces; it’s about speaking up and saying why you’re wearing them. It supports our own messages around allyship, making sure that everything we do is about including people and encouraging them to be their authentic selves, whether that’s on or off the pitch.”

Jürgen: So, nice to meet you!

Meikayla: Nice to meet you, too. It’s a pleasure.

Jürgen: So, the question is: why are we here?

Meikayla: We’re here because of a very important cause, I think, to the club and a lot of members at the club – for the Rainbow Laces campaign.

Jürgen : Exactly. So the question was a little bit more philosophical: why do we have to be here and still talk about it? I don’t know how to say it in English, an openly gay footballer?

Meikayla: Yeah, openly gay footballer. I think in women’s football I’ve been very fortunate that it’s not as unusual and it’s very accepted and the community is very strong. But I think for the entirety of football, there’s still a lot of work that needs to be done, especially on the men’s side, just to make it a platform that it’s accepted and that it’s OK to be who you are and be true to yourself.

Jürgen: That’s what life is about, eh? I’m 100 per cent sure it’s not a problem in a dressing room, which is obviously the starting point for it. I don’t know how much of a problem it would be in a football stadium. There must be a reason why so many gay football players will not say what they think, how they want to live.

Meikayla: In the changing rooms I don’t think it’s a problem. But I think potentially outside, there’s a lot of external factors and opinions that are maybe a little bit outdated and it’s just about making sure that everyone is treated equally and not looked down upon for their sexuality or how they present. If someone does step out and say, 'This is who I am.' Then it’s accepting them for them and making it a place that’s safe.

Jürgen: I think one of the issues is that, if you do it the whole world makes a big fuss of it, and it’s a part of life where you don’t want to make a big fuss of it. It’s private but you have to go and open up and that makes it so strange as well. It’s like you sit there and cameras from all over the world and here’s one and, 'How do you feel about it?'

Meikayla: I agree, I agree. For me, I was very fortunate to be surrounded by a very supportive network and my family and friends – and they accepted me for who I am. But I think on the men’s side there is a lot of stigma around being who you are. And the outing, we need to create that platform where if someone does come out and identifies who they are, that there isn’t like a big fuss made about it because it should just be – it should just be, you know….

Jürgen: Is it like, as a gay person, you have pretty much two outings in your life? You have one where you have to realise it – but then you had to tell your parents. Is it like that?

Meikayla: Yeah, I think so. I think for me, on a more personal note, I was very young and I think my mum already knew – like most mums, they know everything! Yeah, it was more for me, I think, to my friends and then my wider family. And in a football setting, maybe even then a third time if you want to publicly announce it, or like say it to the world almost. I think for me that came more naturally. I just sort of made a post around the timing of the year when we do sort of celebrate and highlight these issues.

I feel, not that it’s a job for me to put myself out there, but I always think in the way I carry myself if I can affect another young person or someone around my age and they can see me out there being honestly who I am and being true to me then that helps them come to terms with what they’re dealing with, then that’s amazing.

Jürgen: Is there a number or an email address that if I want to talk about it, for footballers or maybe just in general to call?

Meikayla: I think that Rainbow Laces do have a contact that you can obviously reach out to and talk to...

Meikayla: I guess Stonewall’s main message this season is Lace Up [and] Speak Up and for me personally obviously I will be wearing the laces to show my support, obviously being an out and proud footballer. So it’s a visibility kind of thing, it’s to encourage others to speak out, like we say, highlight to reach out if you need help or if you need guidance or any sort of forms of information, I guess, to help you as an individual. What about you, Jürgen – how do you feel about it?

Jürgen: Great, honestly. They will stay in there. I really love every year when it happens. I'm a perfect example for it – how much awareness, how the awareness level changes from the moment you put them in. So you should try, really. It feels great and you can put awareness on something which is obviously really important. It’s difficult, I’m 54, I’ve been through a lot of periods in my life but a lot of problems I’ve never had, so it means you talk about it like an interested viewer, 'Oh yeah, how would that be, how would that feel?' and I never have the problem. But I have so many gay friends but I never thought about how it was when they had to say, 'By the way, mum, dad, to everyone else, I’m not exactly how you expected it maybe' and that’s a challenge we should not face in the way we face it in our life. So that’s it and that’s how it still is obviously. And whatever I can do, I can say today here, live on camera, I will do. I’m completely in. It's a great campaign, I have to say, and it looks good!

Meikayla: It does look good! Rainbow colours look amazing. They bring a smile to everybody’s face. As an ally, it’s so important for us to have people like you who are in our corners and standing behind us and supporting us. The biggest thing you can do is listen and support and educate yourself if you don’t know, because I think that’s maybe an area that a lot more people can maybe place more attention on. It’s just educating because, at the end of the day, we’re all people, we’re all humans, we’re all doing the same thing, we’re all kicking a ball around. So, I totally agree with everything you're saying and your support means everything.

Jürgen: Great, I’m in – I’ve said it on television!