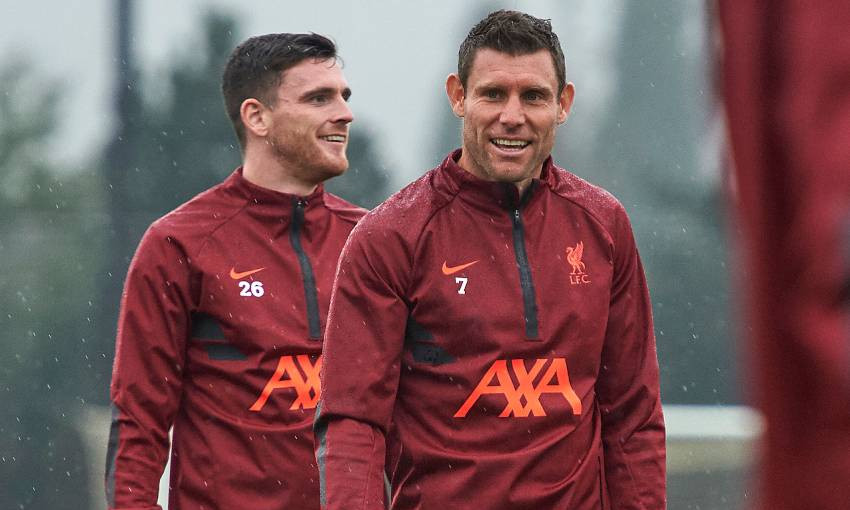 Liverpool have no new injury concerns ahead of Saturday's duel with Southampton but will monitor fitness levels across the squad.

The Reds have a quick turnaround for the Premier League contest at Anfield following their 2-0 Champions League victory against FC Porto on Wednesday evening.

Jürgen Klopp admitted during his pre-match press conference that previous workload may come into his thinking when deciding upon a line-up to face Ralph Hasenhuttl’s Saints.

The boss said on Friday: "Again, Wednesday-Saturday is always a time where we have to really think about how can we change.

"Saturday-Wednesday is completely different, it’s a day more, that’s what you need. But Wednesday-Saturday, after all the games we played, we have to really think about.”

James Milner, Andy Robertson and Divock Origi all made welcome returns in the midweek win over Porto.

Klopp added: "Nothing [new] happened, or at least my phone didn't ring this morning about any kind of issues.

"The players who were in the squad against Porto should be available again.”

On the competition at left-back between Robertson and Kostas Tsimikas, Klopp said: “You saw Robbo coming on, when he came on last game, he didn't play that game because if he plays the game after his little injury, there was no chance to play the next one. So we shared a bit the intensity between the two of them.

"I'm really happy about the development of Kostas, really happy, but Robbo is Robbo and is an outstanding player."

For the visitors, meanwhile, Stuart Armstrong is a confirmed absentee due to a calf injury.

It is otherwise positive squad news for Saints boss Hasenhuttl, with Nathan Redmond available again after missing their defeat at Norwich City last weekend following the birth of his son.

Moussa Djenepo is also in contention having recovered from a slight knock and Jack Stephens could be considered – the defender is back in training for the first time since sustaining knee tendon damage in September.

“Jack is back in training, which is the first week in a long time,” said Hasenhuttl ahead of the trip to Merseyside. “This is good for him, good for us and if he is ready for the weekend I’m not sure, but it’s good that he’s back.

“In the moment it’s quite tough to get into the [matchday squad] as we have a lot of alternatives. After one week training, coming immediately back it takes a little bit [of time].

“I try to give them longer on the pitch to come back as we were still taking care with him this week. There’s no rush and no hurry.”