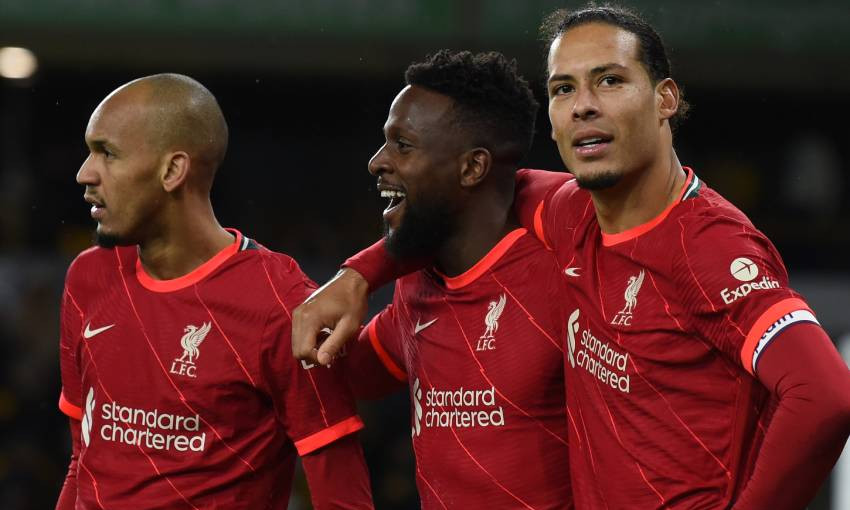 Divock Origi scored an injury-time winner to give Liverpool the three points away at Wolverhampton Wanderers on Saturday.

The striker came off the bench and fired in with 94 minutes on the clock, handing the Reds a crucial victory in the Premier League.

Here are five talking points from the match...

'Divock Origi, the legend, came and finished it off for us'

Just when you think it's decided, up pops Origi.

The No.27 added another to his insanely long list of important goals for Liverpool.

"I think that ties in with the values of the club – keep believing, keep going," the match-winner reflected.

But his introduction into the game after 68 minutes was far from a last throw of the dice by Jürgen Klopp.

A change in shape – that included Diogo Jota dropping slightly deeper – helped the Reds gain a foothold the further the game went on.

The winner was a well-crafted bit of play in the fourth of five minutes added-on time.

Virgil van Dijk's searching ball found Mohamed Salah, whose brilliant first touch created the space for a cut-back. There on the edge of the six-yard box was Origi, swivelling before clinically drilling past Jose Sa.

"It was his game,” Klopp explained afterwards. "He could be Divock Origi 100 per cent: in and around the box, use your body, use your technique, finish the situations off."

Origi's moment was the 13th game-winning goal scored in the 90th minute or beyond in the Premier League under Klopp.

Chelsea began the day top of the table but defeat at West Ham United saw them drop down to third, with Liverpool ahead in second by a point. Manchester City's win at Watford elevated them up to first place.

But as witnessed on Saturday, there's a long way to go and plenty of twists to come in the battle for the crown.

"It’s really important and feels really big today for us, to be honest," Klopp told his post-match press conference.

Salah adds to his stats

Salah may not have been on the scoresheet on Saturday, but the Egyptian still leads the Premier League Golden Boot race.

He's also top of the competition in another category, and added to that lead on Saturday.

The cross for Origi was his ninth assist in the top flight this term – two more than teammate Trent Alexander-Arnold and Paul Pogba.

The No.11's goal-involvement tally in all competitions for this season now stands at a staggering 28. It's early December...

The platform for Origi to be Origi was built from the back.

The Reds successfully resisted a threatening Wolves attack to land their ninth clean sheet in the 2021-22 Premier League. No team has more this season.

Alisson Becker was limited to just one save throughout the afternoon, while Joel Matip led the side by winning 10 of his duels.

On the overall team display, Origi summarised: "I would say it's a successful day."

It's been a hugely satisfying week for Klopp and his players.

Kicking it off with a big victory over Southampton, the Reds' nearest rivals were then comfortably dispatched before ending it with that type of win at Molineux.

Nine goals scored, one conceded and nine more points towards the total.

Up next is an encounter with AC Milan at the San Siro as Klopp's men go in search of 18 points from a possible 18 in Champions League Group B.

And then a certain Steven Gerrard returns to Anfield with his Aston Villa side for a Saturday 3pm GMT kick-off.