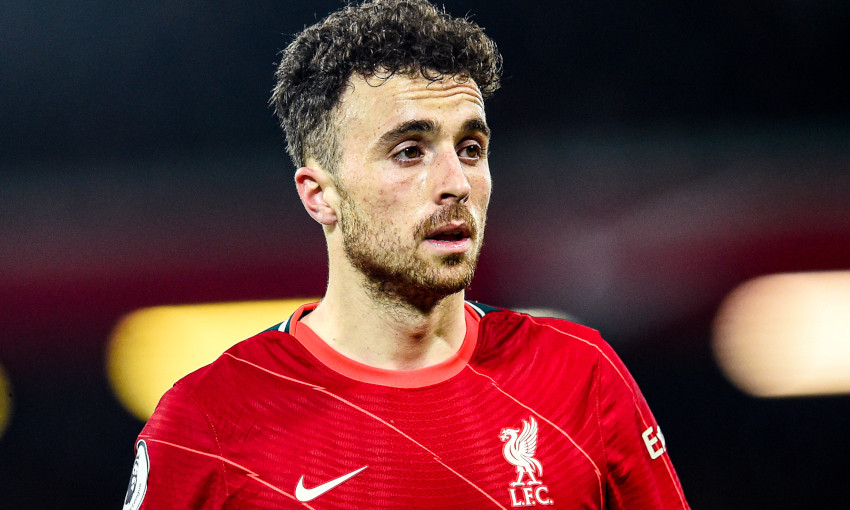 Diogo Jota has set his sights on a winning start to 2022 as Liverpool seek to reduce their deficit at the top of the Premier League table.

After the 1-0 defeat against Leicester City on Tuesday night, the Reds now trail leaders Manchester City by nine points with a game in hand – the postponed Boxing Day meeting with Leeds United.

But with half of the league campaign still to be played and the squad aware of the necessity to prevent repeats of their loss at King Power Stadium, Jota insists everything will be given to close that gap, beginning with Sunday’s trip to Chelsea.

“There are still a lot of games. Obviously there is a gap now between us and them,” the Portugal international told Liverpoolfc.com. “We know there is that gap but we also know we are able to close that gap and that’s the plan.

“But we need to avoid what happened against Leicester because if we keep doing the things we did in that game, it’s going to be hard for us. We know that. So it’s up to us to recover from that game, regroup and go again – because we are able to.”

Read on for the rest of our pre-match interview with the Premier League’s second-top scorer as he reflects on his and Liverpool’s form during 2021, assesses this weekend’s opponents, and reveals his favourite moment of the year…

You’ve had a couple of days now to reflect on the result at Leicester. The manager said you just weren’t yourselves. How do you look back on it now?

I think it’s the truth. I think everyone felt it: we were not like ourselves, we were not getting that momentum we often do. Although we had our chances to open the scoring – if we did that, the game changes, like we know. I think that was the missing part. After they scored their goal, the crowd was really up, the players were doing that extra effort and everything got harder for us and we couldn’t get the equaliser. For me, the key moment was that first goal, that could change everything. But, like I said, we were not really ourselves, we missed those chances. We have nothing to blame, just now recover, regroup and go again.

Looking back on 2021 as a whole, how pleased are you with your form and the team’s form overall? There were 16 goals for you and that’s despite you missing the first two-and-a-half months…

Yeah, the year didn’t start well, especially for me – I started the year injured. But I kind of finished strong with the team and we did a good effort in the last third of the season to finish in the top four. We got Champions League. We are in every competition. Obviously we have this gap now [to City in the table] but it’s still possible. So I think, in the end, it was a good year with all the circumstances. Now I just hope 2022 can be even better.

Any favourite football moment for you of the year, either for yourself or the team?

For the team, I could say Alisson’s goal [against West Bromwich Albion in May]. The header was obviously an incredible moment and incredibly important. For me, there were many moments – always when I’m on the scoresheet it’s a special moment. So every single moment was special, I cannot say one.

Next up it’s Chelsea this weekend. Is the size and importance of this game helpful after a defeat in trying to bounce back quickly?

It is what it is, we cannot pick who we are playing next. We know it’s Chelsea away. We drew with them at home, we know it’s not going to be easy. We both want to close that gap but we know at least one of us is going to be even further back. So, it’s a great game, a big game. We need to be at our best – I know if we do that we are able to win the game there.

They have drawn three of their last four in the league and are dealing with some injury issues, but how difficult and challenging a side are they to play against?

We know even against 10 [men] how difficult it was for us to create chances [in the game at Anfield earlier this season]. I think that’s their main thing, they don’t allow the opponent many chances. They have their injuries, but we have had ours as well, we have had our COVID cases as well, like theirs. Whoever is going to be on the pitch, 11 against 11, it will be very tough for everyone involved and a very intense game. It will be a proper Premier League game. We want to start the year well and the only way is to win the game at Stamford Bridge.

Chelsea normally line up with a back three. As a forward, does that change the way you play, in terms of the positions you take up or your preparations to face a three rather than a four?