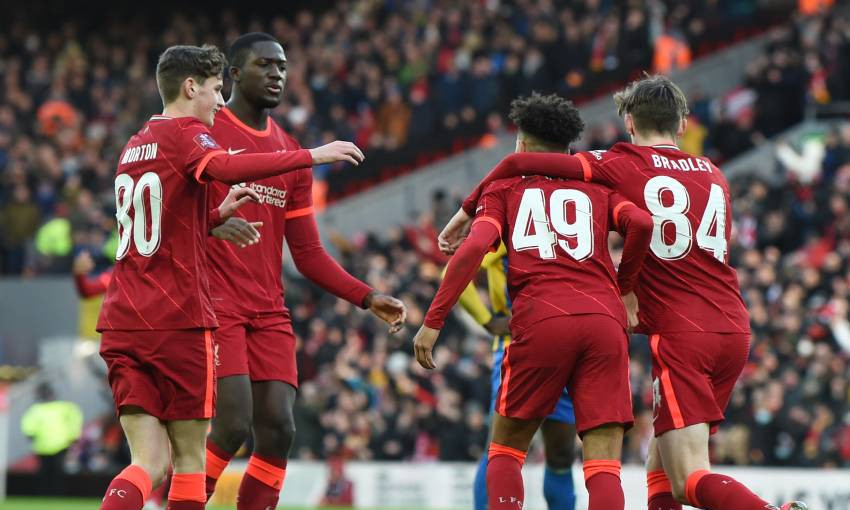 Liverpool advanced in the Emirates FA Cup with a 4-1 victory over Shrewsbury Town at Anfield on Sunday.

Daniel Udoh had put the League One side ahead in the third-round tie after 27 minutes, though the Reds fought back through goals from Kaide Gordon, Roberto Firmino and Fabinho (two).

Gordon became the club's second-youngest scorer with his well-taken equaliser after the half-hour mark, before Fabinho made it 2-1 from the penalty spot just before half-time.

Firmino then came off the bench in the second half to add the third, as Fabinho completed the scoring in injury time to secure the hosts' passage into round four.

In a much-changed Liverpool line-up, there were first senior starts for Max Woltman and Elijah Dixon-Bonner. Fellow Academy products Gordon, Conor Bradley, Tyler Morton joined them in the XI.

Jürgen Klopp also returned to the dugout following his isolation due to a positive COVID-19 test.

Liverpool took charge of the contest in the opening phases.

Their first real goalscoring chance arrived in the 20th minute, with Gordon's shot from outside the area forcing a save from Marko Marosi at his near post. Either side of that effort were headers over the bar by Ibrahima Konate and Virgil van Dijk from Andy Robertson delivery.

But Shrewsbury picked their moment to attack and made it count.

Nathanael Ogbeta had fired in a dangerous cross 60 seconds earlier that didn't connect, but second time around Udoh was there to divert it into the back of the net with a first-time strike.

However, Liverpool's response was a quick one.

Bradley found Gordon inside the penalty area, and the latter displayed quick feet inside the box to shift the ball onto his left foot, which he used to finish beyond Marko Marosi.

Then Ethan Ebanks-Landell was adjudged to have handled Robertson's free-kick into the area, prompting referee David Coote to point to the spot.

Fabinho took responsibility from 12 yards out and sent the goalkeeper the wrong way to put his side ahead.

Takumi Minamino was introduced for the start of the second period in place of Woltman.

Dixon-Bonner nearly netted Liverpool's third from close range early on, but was denied by a fine reaction save from Marosi.

The midfielder then received a well-deserved round of applause from the crowd when he was taken off for Firmino.

The Brazilian left his mark on the tie when he brilliantly added the Reds' third with 12 minutes remaining.

Bradley's cut-back from the right touchline found Konate, whose shot was deflected towards Firmino. With his back to goal inside the six-yard box, the No.9 nonchalantly backheeled the ball past Marosi.

And it was made 4-1 deep into stoppage time when Fabinho saw his initial header from Kostas Tsimikas’ free-kick saved, before following up the rebound with a powerful finish into the roof of the net.