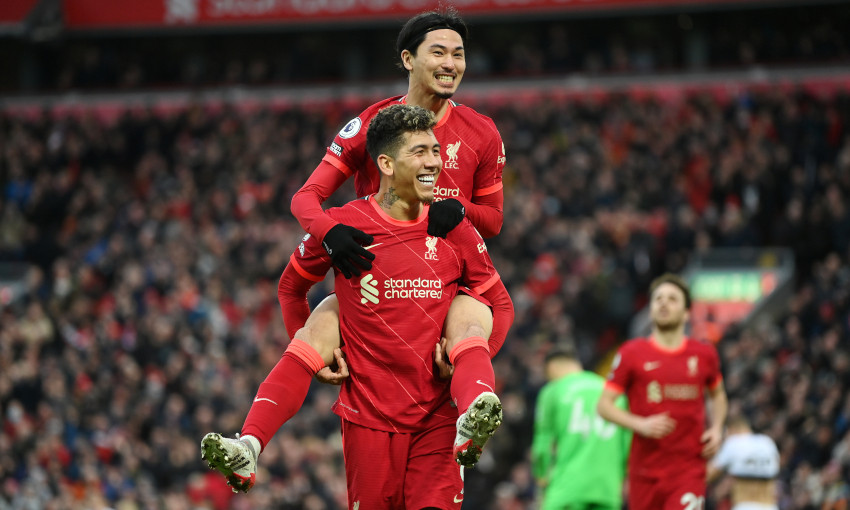 Liverpool got back to Premier League winning ways with a 3-0 victory over Brentford that required perseverance and patience at Anfield.

In the penultimate minute of a testing first half on Sunday, Fabinho’s header edged the Reds in front and they expanded on their lead courtesy of Alex Oxlade-Chamberlain and Takumi Minamino after the break.

Here are five talking points from a first league success for Jürgen Klopp’s side for exactly a month and one that moved them up to second, 11 points behind Manchester City with a game in hand.

Scoring a goal for Liverpool on your birthday is a rarer feat than you might imagine – but one Minamino achieved to celebrate turning 27 on Sunday.

It was something of a gift for the Japan international, too, who had only been on the pitch as a substitute for three minutes when Roberto Firmino’s pressing forced a Brentford error on the edge of their box and he unselfishly teed up Minamino for a slick finish at the Kop end that wrapped up the 3-0 result.

The attacker is the first Reds man to find the net on his birthday since Daniel Sturridge bagged the only goal of a 1-0 win over Manchester United in September 2013.

‘Of course I would be more than happy…’

After helping himself to a brace against Shrewsbury Town last weekend, Fabinho had spoken ahead of this game of his hope to add his name to the scoresheet more frequently in the future.

“For a No.6, of course the priority is first [to] defend and work on the construction of the game,” said the No.3. “But if I can be more decisive in the other part of the pitch as well, scoring or giving assists, of course I would be more than happy.”

And he duly delivered at the earliest opportunity. With a minute left to play of the first half against Brentford, Fabinho showed strength to wrestle away the attention of Kristoffer Ajer and meet Trent Alexander-Arnold’s corner with a delicate header that looped inside the right post. 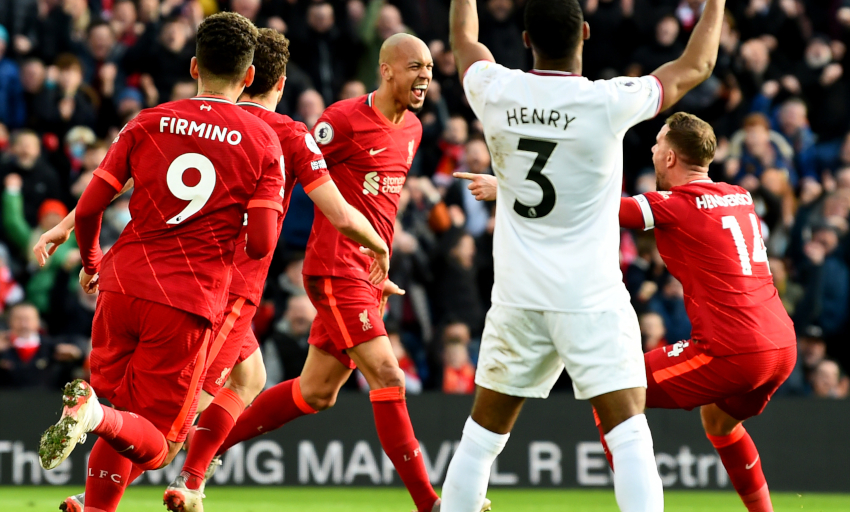 Three goals in a week for the Brazil international have almost doubled his overall number for the Reds (seven) since his arrival in 2018.

It was certainly one of his most important yet, the effort breaking the deadlock at a time in the contest when the visitors – who were dropping into a back five when defending – had not only held firm but begun to threaten at the other end.

Before a ball was kicked in the 350th match of Klopp’s Liverpool reign, he already held the highest win ratio of any manager in the club’s Football League history since 1893.

Victory over the Bees – his 213th in total with the Reds – only strengthened that position, with Klopp’s win percentage now marginally increased to a hugely impressive 60.86 per cent.

The German is the eighth Liverpool manager to reach the milestone of 350 games in all competitions.

The final result meant all to Klopp, of course, and his trademark three post-match fist pumps at the Kop end were increased to a powerful five in recognition of the hard-fought day’s work.

“I knew before that it will be a really tough one,” said the boss. “It was a tough one and that’s why I’m so happy that we did so well in other moments.”

An Alexander-Arnold set-piece helped to unlock the Brentford defence, his 44th-minute corner delivery from the left-hand side leading to Fabinho’s opener.

It brought up double figures for Premier League assists this season for the right-back, moving him clear of Liverpool teammate Mohamed Salah in that top-flight ranking.

The Scouser – a nominee for the FIFPro World 11 that will be announced on Monday – remains among the absolute elite in the game for creating goals.

Since the beginning of the 2018-19 season, only Thomas Muller (64) and Lionel Messi (47) have recorded more assists than Alexander-Arnold’s 42 in Europe’s top five leagues.

And just for good measure, Andy Robertson was the provider of the Reds’ next goal of the afternoon, swinging a deep cross to the head of Oxlade-Chamberlain in the second half.

It was the ninth occasion that both full-backs have assisted a goal in the same league match.

Klopp acknowledged during his post-match assessment the importance of the improvement in his team’s set-pieces from the Carabao Cup stalemate with Arsenal in midweek, and Robertson concurred with a detailed reflection on that aspect of the game.

“We knew they were really good at attacking set-pieces but we also knew you could get at them with set-pieces going forward,” Robertson told Liverpoolfc.com.

“On Thursday, me and Trent couldn’t quite get the ball off the deck at any point at set-pieces, so it was important that we put in good balls.

“My first one was good for Hendo, could have got one, and Trent put in a couple of really good ones today that were causing all sorts of problems. Really good.

“We were both frustrated with set-pieces on Thursday and it’s important to put it right. Trent getting an assist from one is perfect to put that right.”