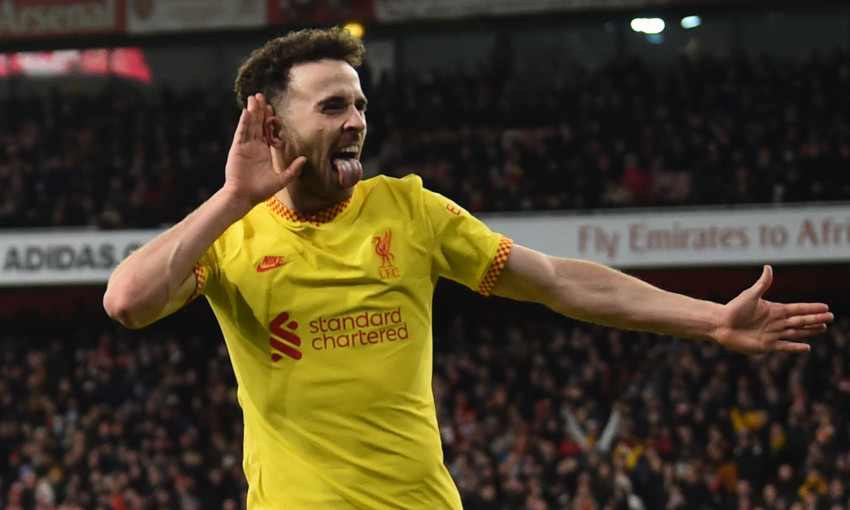 Diogo Jota was sure he'd done it.

The Portuguese had sumptuously controlled Trent Alexander-Arnold’s raking pass over the Gunners defence with his first touch and deftly lifted a precise finish over goalkeeper Aaron Ramsdale with his second.

But Jota was convinced it was going to count despite the initial judgment.

“I thought I was on,” he told Liverpoolfc.com of a strike that was, indeed, subsequently confirmed as a goal following a VAR review and sealed a 2-0 win that sent the Reds through to the final at Wembley.

“I was quite surprised, I was already celebrating when I saw the whistle and the linesman with the flag up. I thought, ‘No, I’m not offside I think’ because as a striker I think you have that feeling sometimes – ‘Maybe I’m off’ – but this one I was confident I was on.

“I said in the dressing room it killed a bit of joy of the moment. I was going to celebrate with the fans for 2-0 and then we needed to stop. But then when you realise you are actually on, it’s not just my second goal, it’s the goal that almost killed the game, so it was a really important moment.”

Jota’s double at Emirates Stadium set up a showdown with Chelsea that will be played on Sunday February 27 – a chance for the No.20 to secure his first piece of silverware with the club.

Read the rest of his post-match interview below…

Congratulations, Diogo – how does it feel to be heading to the final?

Great! Especially after that first leg, we knew we could have done better so we came here tonight to do the job and great game. I think they didn’t have a lot of chances, we scored ours. The atmosphere was great, so heading to Wembley is a nice achievement.

How pleased are you with the fact you got through tonight? It was difficult after the first leg and they started very well…

Yeah, both halves. I think obviously playing at home they wanted to reach the final as well so they started with everything, pressing, but it is what it is. After that you always concede a bit more space, you are not as fresh as in the beginning – and we took advantage of that. I think in the end we did a great thing here today.

The first goal, did you catch it as you wanted to? It seemed to really wrongfoot Ramsdale…

What does it mean to you to potentially play in a cup final at Wembley?

It’s incredible. I played there in the semi-final with Wolves once and I know how special it is to play there, but this time it’s a proper final with a trophy to play for, so when the time arrives we go with everything to win it.