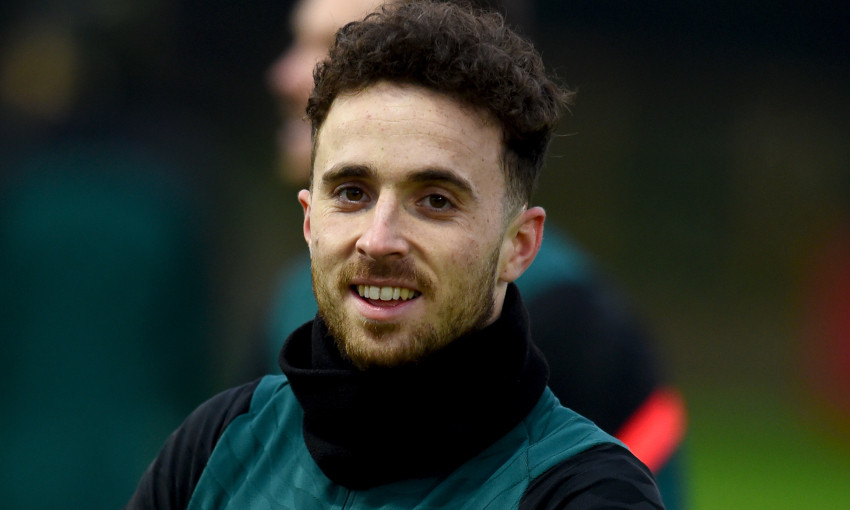 It's a revealing answer to a fair question.

Is Diogo Jota in the best form of his career?

The statistics make a strong case, with the Portugal international on 14 goals in all competitions this season – already higher than his tally during a fine debut campaign at Anfield in 2020-21.

Second-top scorer in the Premier League behind teammate Mohamed Salah, it was Jota’s smartly taken double at Emirates Stadium last week that sent Liverpool to a first Wembley cup final for six years.

But the man himself prefers not to get caught up in considering that aforementioned question. His focus is always the next challenge and the next opportunity to deliver his best.

“I always find that hard to answer. I was asked that question after I first joined Liverpool, I think before I got injured last season, but it’s always hard to say,” said the No.20, quoted in a recent matchday programme.

“Sometimes in games you are just in the right place at the right time and you just need to tap it in and sometimes, like that recent game against Leicester, I was nowhere near that moment, so it’s hard to know.

“If I’m in the moment of my life, why couldn’t I get a proper chance against Leicester, for example? I think each game is different and a new challenge and you always need to be at your best to be able to perform at your highest level.”

See you after the break reds 🤗 https://t.co/X7xlSIv03h

Strong with both feet and capable of excelling in any position across the forward line, the former Wolverhampton Wanderers attacker’s versatility was a key part of his appeal to Reds boss Jürgen Klopp when he signed in 2020.

That flexibility on the pitch has been a long-standing trait of the 25-year-old, who was shifted into a more advanced role in the latter stages of his football development.

“At the start I played 10 years as a left midfielder in a 4-3-3,” said Jota. “Then as my physicality developed, I started arriving in the box more often and scoring goals.

“Then I went basically to a No.10 position. People started thinking, ‘Oh, this guy can score goals, so put him up front.’ That was basically how it was.”

“Maybe some people will say I’m not a proper false nine or I’m not a nine, whereas some others may like it. But whenever I’m on the pitch I aim to get goals and get the team reaching the opponent’s goal. That’s what I try to do.”