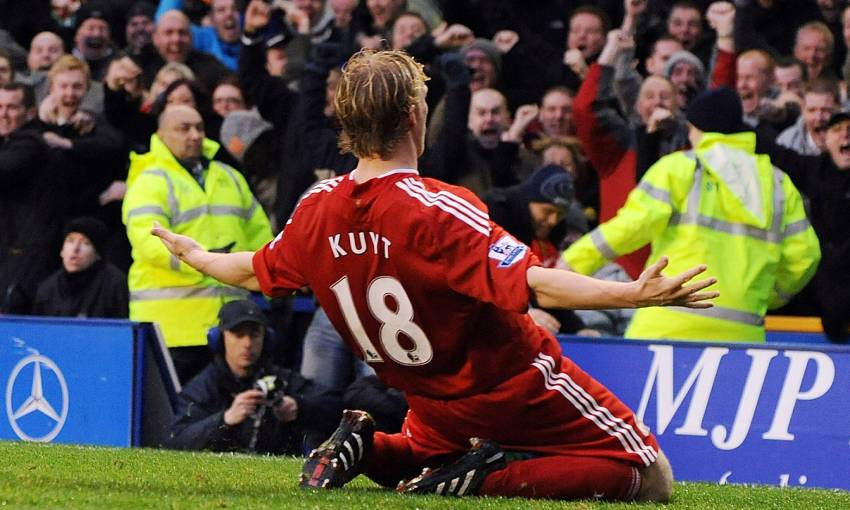 Dirk Kuyt uses his latest Liverpoolfc.com column to pen his thoughts on the promising prospects of Liverpool's season and the form of Diogo Jota, as well as answering your questions.

Liverpool had a brilliant few days last week and it shows just how quickly the perception and mood of a season can swing.

They reached the final of the Carabao Cup and made it clear they're not giving up in the Premier League title race.

The Reds' win at Crystal Palace, coupled with Manchester City drawing with Southampton, brought the gap down to nine points. The chasers have a game in hand, too.

All Jürgen Klopp's side can do is keep continuing to win – by whatever means necessary – and hope for further slip-ups. I've been in the position where Man City find themselves and I know pressure can force errors.

When I was at Feyenoord and we won the Eredivisie in 2016-17, we were cruising at the top of the table. But when you drop points, you're very much aware that you've handed a chance to your rivals.

It was crazy. We were in control all season and then we had the chance to win the league against Excelsior – a team already relegated – and we lost 3-0. We then had to win the last game and the pressure was immense.

It was the same when I was at Fenerbahce in 2013-14. We were controlling the season but once you drop points, you can feel the heat massively.

Obviously Pep Guardiola's City are a brilliant team that's won plenty and are reigning champions, but they will be feeling pressure.

Liverpool's win last weekend was an important one. When you can handle difficult games or struggle in games and still manage to win them, that means a lot. It shows the fighting spirit of the team is there and extremely healthy. And when you see your rival drop points, that will undoubtedly boost that feeling as well.

I'm sure Klopp would agree, Liverpool haven't been playing their best football of late. But when you have to play without Mohamed Salah, Sadio Mane, Naby Keita, Thiago Alcantara and others, it's a fact that it's going to be difficult to be at the top of your game.

This group of players have turned a negative into a positive. They've had to pick up results without elite players, and others have taken on important roles; Alex Oxlade-Chamberlain has been scoring and Fabinho took responsibility with penalties.

I also believe Virgil van Dijk's header versus Palace was the ninth set-piece goal Liverpool have scored this season, so that's also a very good strength. In fighting for trophies and titles, it can be decided on very small details and I think it's a big power of Liverpool's that they can score this many goals from dead-ball situations.

Normally when you have Mane and Salah, it's easy to score goals because they're natural goalscorers and have so much quality. But Liverpool have had to score goals through another way – and that only bodes well for the rest of the season.

His goals at Arsenal, of course, secured Liverpool's spot at Wembley, and it was hugely encouraging to see him as such a goal threat even when playing out wide.

Jota probably prefers and has better opportunities to score when he's playing in the centre of the front line. But players up front these days can play in every position and still be effective in the penalty area.

That said, it can be difficult to be shifted out wide when you're a striker by nature. Obviously everyone knows I arrived at Liverpool as a centre-forward and was used there by Rafa Benitez during my first season.

I was the club's top scorer in the Premier League in 2006-07 but was then put out on the right for the following campaign. You've got to change your mindset because the team asks something different from you.

Anyway, I think in Klopp's system every attacker – even those out wide – has many possibilities to score goals. Jota and Oxlade-Chamberlain have proven that in the last week or so.

What a great signing Jota has been. His arrival in September 2020 just gave the feeling that even the top players – the brilliant front three – had to fight for their place in the team. Competition like that is so helpful.

He's incredibly important for Liverpool and scores important goals, too – a handy trait for sides going for trophies.

There's a bit of a gap now until Liverpool's next game due to this mini international break we're in. Some players will be representing their countries, and the others will make the most of the time off.

You wouldn't believe how big a difference a few days off can make. Players can use this time to recover from small injuries, from little pains in their body and then get ready for a lot of games – a lot of important ones – in multiple competitions.

But on the flip side, sometimes as a player you want to continue. You've had a few good results and you feel like you're building momentum. I know a large number of fans will have had that feeling after the Palace game.

However, if you look at the schedule nowadays, it's insane and it's vital to have this rest. Players have to play so many games.

I see a few members of the Liverpool squad have taken the opportunity to get away for a bit. In my view, the best recovery you can have is some sunshine – and the sun wasn't shining too much in England when I was there!

The sun, the beach, the sea can help your body a lot. And being with your family and your close friends, it's always nice and so important. We're asking a lot from players these days – especially if you're a Liverpool player when you're expected to compete for everything.

@MrMattyJohnson: We've seen huge changes in professional football over the years. What's the biggest transformation you noticed as a player after starting with Quick Boys in 1998 until you retired a few years ago?

We know much more about data. Nowadays in football, it's impossible to hide. Back in my day, especially in the beginning of my career, you could cheat sometimes in training, sometimes in a game. But now when there's something you don't do what the coach has asked, you can see it everywhere. You'll be shown by the people who analyse on TV – like Jamie Carragher! – and the data coach can show how you didn't do too well in training. That changed a lot. There are more eyes on the players and there's no way to hide anymore.

@hamir0287: What's your best memory from European trips while at Liverpool?

The Champions League was amazing and, for me, the most amazing nights were the Anfield nights. But whenever we were abroad, it always had a special feeling on the day of the match. We always went for a walk. I can remember when we played Barcelona away and we walked in the city like six, seven hours before the game. You saw the Liverpool supporters in the city, the Barcelona fans and it was always a very special feeling. I've got very good memories of that time.

Chris Shaw: There was a Champions League game circa 2007, 2008 at Anfield and someone was outside handing out free red carrier bags with 'KUYT' on. Do you have any idea what they were?

They didn't have 'KUYT' on them but my first name is Dirk and there's a big, big supermarket chain in Holland called Dirk. So when I was playing at Feyenoord the fans all bought their bag and they'd have them in the stands when I played. It's actually a supermarket, so it must've been a clever commercial thing!

Dirk Kuyt was speaking to Liverpoolfc.com's Glenn Price. Tweet @GlennPrice94 or use this form to get your questions answered by the Dutchman.