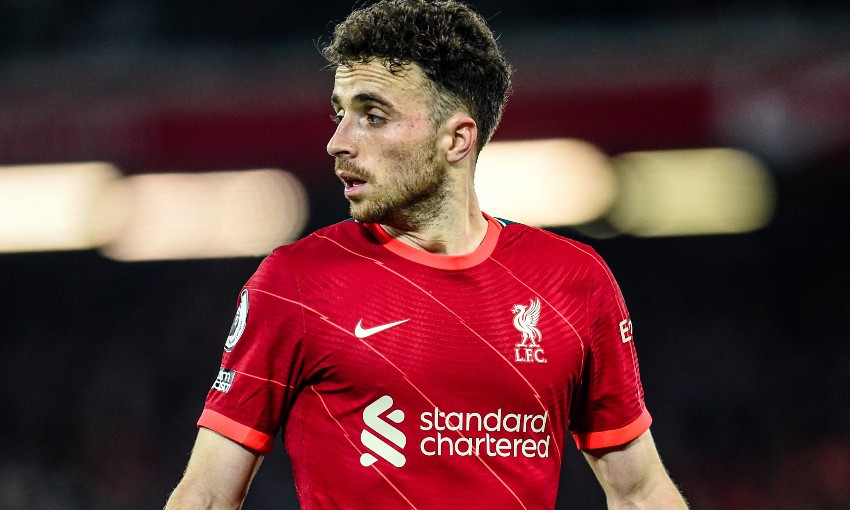 Diogo Jota may be available for Liverpool at Wembley but Roberto Firmino will miss the Carabao Cup final.

Injuries sustained during the 2-0 win over Internazionale at San Siro resulted in the two forwards being absent for the Reds’ victories against Norwich City and Leeds United.

Both are making progress in their respective recoveries, though only Jota (ankle) has a chance of being part of Jürgen Klopp’s squad to face Chelsea, with Firmino (muscle) further away from fitness.

“Bobby we have to see in the next two days. He is pushing himself really hard but he will not be available for the final, to reach the squad,” Pepijn Lijnders told the media on Friday.

“We hope he will be back really soon because you all see and know and feel how important he is for our way of playing, so I am happy that he is pushing himself. Hopefully he is soon back.

“Jota, so far no reaction on the things he did, so the straight-line running, the changes of direction and the ball work he did, so that’s a good sign. He isn’t ruled out but still it will be a challenge.”

Lijnders reported no fresh injury concerns ahead of the final, which Caoimhin Kelleher will start.

The assistant manager continued: “I think Caoimh is a really good example. If you look at him, he is going to play the final – if everything goes well tomorrow, of course, in training.

Chelsea boss Thomas Tuchel, meanwhile, provided a positive bulletin on his squad during his pre-match press conference, with only Ben Chilwell definitely ruled out of Sunday’s game.

“Everybody joined team training from the first to the last minute,” Tuchel said on Friday.

“We have had at the moment no reactions, just positive reactions, and I hope it stays like this and we have everyone available for Sunday after our last training tomorrow.”

On whether Reece James could return from injury at Wembley, Tuchel noted: “It’s a very good question. Even if I wanted to, I’m not sure I could answer your question right now.

“He looked brilliant in the last two training sessions. Let’s wait another session and see if I’m crazy enough to put him on the pitch, or if the reasonable side of me wins and we go step by step.

“It would be a huge step, but honestly yesterday and today he looked so strong and confident and involved in training, you are tempted to do it. Let’s see.”

Tuchel was coy on whether Edouard Mendy or Kepa Arrizabalaga will play in goal.