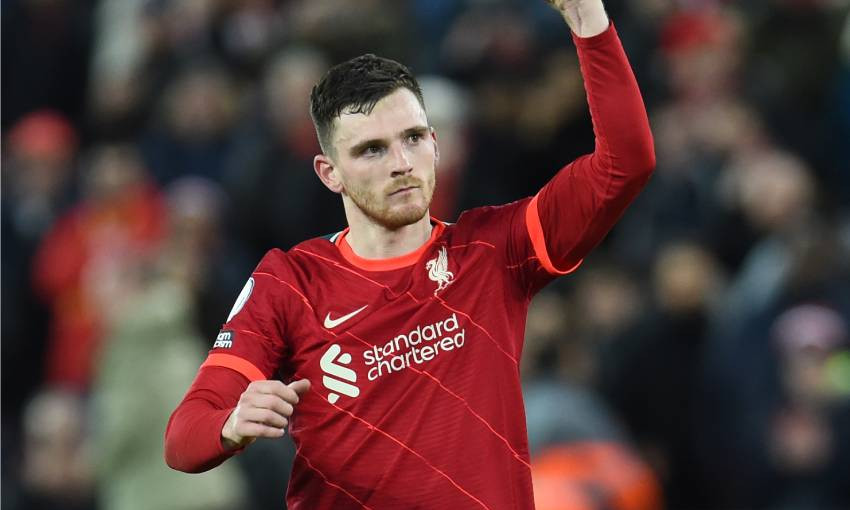 Andy Robertson was delighted with the vital and battling clean sheet that laid solid foundations against West Ham United on Saturday evening.

Liverpool secured yet another important three points in Premier League action at Anfield as Sadio Mane’s first-half strike in L4 moved his side to within three points of league leaders Manchester City.

The visiting Hammers threatened on several occasions, with the Reds not having the clash all their own way on home soil.

Trent Alexander-Arnold notably cleared off the line having provided the earlier assist, while Manuel Lanzini missed a golden chance to level from inside the six-yard box after the break.

With victory eventually secured, Robertson spoke to Liverpoolfc.com post-match about the tough contest and the contribution from Alexander-Arnold on the opposite defensive flank – read on for the full interview…

Andy, West Ham are a team who always provide a tough test. What are your thoughts on the game?

It was tough. They’re a good team, they made it difficult for us. We managed to get ahead with Sadio and they had a few chances. We weren’t quite at our best but when you’re not at your best it is so important to try to win the game. We kept a clean sheet and the defence was called upon quite a lot. It was two good teams going at it. I think we felt the relief around the stadium when the final whistle went.

Another clean sheet for the defence, which is a massive positive…

Clean sheets are so important, they give us confidence in what we’re doing. Today was one of the tougher ones. We’ve had to put bodies on the line, head the ball clear and we’ve had to make last-ditch tackles and things like that. But the clean sheets are so important – that is what we base ourselves on. Don’t get me wrong, the forwards love scoring goals but the best way to win games is by keeping clean sheets, which is the start of it, then hopefully the boys up top do their magic. Luckily Sadio did today, then it was up to us to dig deep, and we managed that. We were probably not at our best but it’s an important three points.

That’s 12 games now on this winning run, how much does that breed confidence across the team?

Yes, 12 games on the bounce is incredible but we need to keep going. We need more than that if we want to achieve what we want to achieve. We’re in a good moment just now, we’re playing well and if we don’t play well, we’ve managed to still grind out results, which is important, so long may it continue. We’re into March now and we’re still fighting for three competitions. We have already got a trophy and we need to keep going. It’s going to be a big couple of months, hopefully it’s exciting for our fans. But it’s up to us to make it exciting, and the only way we do that is by winning games and keep progressing in the cup competitions and by trying to keep winning in the league, because we’ve still got a gap to close, we’re still in the chasing pack and we’ve got to keep chasing. The only way we do that is by winning football matches.

A word on your partner on the opposite flank – 16 assists for Trent now and he had a busy afternoon with a goalline clearance...

He’s been incredible. The goalline clearance was special, [he was] slightly out of position to start if I’m going to be critical but his recovery run was incredible – the speed and determination to get back on the line. To be honest, we speak a lot about assists but for me that is the most important thing he has done today. The assist was a mishit shot! He’s admitted that at least… look, 16 assists on the season is incredible but today his most important contribution is the clearance off the line because that kept us in the lead and kept us 1-0 up when really it should’ve been a goal. It was really good from him, incredible determination and an incredible goal contribution – long may that continue.

We have a friendly competition but if both of us are contributing and helping the team win games then that is the most important thing. I was delighted when the goal went in, when you take the lead you then want to hang on for the three points. [It was] a good performance from Trent, hopefully he can get to numbers we have never seen before and keep going. There’s still a lot of games to go and he can get an assist anytime he wants really.

Looking at the title race with Manchester City, is it an advantage to play first?

Being first at the weekend does help, of course it does. You kind of put pressure on the other team, they’ve done it plenty of times to us this season and now we were first this weekend, and they know we’ve got three points in the bag. They’ve got a big game in the Manchester derby, but Man City are an incredible team. They know how to win games, that’s for sure. They know how to pick up three points. Look, we’re still in the hunting pack. We’re still chasing and we just need to keep going.

We can only focus on what we’re doing, and we can only win games that are in front of us. We’ve just got to keep pushing and if we do that, hopefully that looks after itself. We’re chasing an incredible team and I’ve said it before that if they do drop points then we just need to be ready to take advantage of it. I’m sure it’ll be the same if we drop points, they’ll want to extend their lead further. It’s two good teams, it’s been like that for the last couple of years. Look, we’ll fight to the end. We’ll keep fighting, we’re fighting on all fronts, so let’s see where we end up in May.