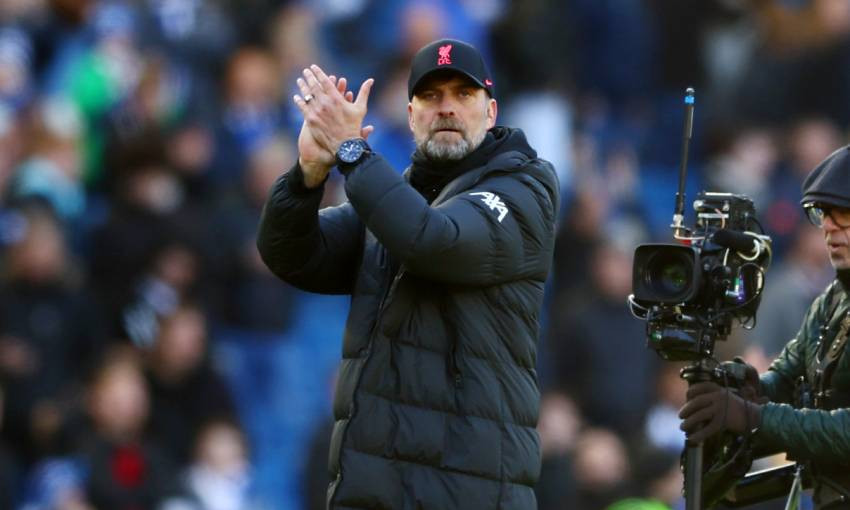 The Reds recorded their eighth consecutive victory in the Premier League thanks to goals from Luis Diaz and Mohamed Salah on the south coast.

Diaz opened the scoring in the 19th minute with an extremely brave header, as Salah doubled the lead from the penalty spot in the second half.

Read on for a summary of Klopp's post-match press conference…

On the result and Liverpool's performance...

Difficult game, good opponent, we needed a few minutes to find into the game. From the moment on when we found ourselves into the game, we controlled it in a really good way. I don’t think you can deny Brighton constantly or completely because of the quality they have, but we did quite well and scored a wonderful goal in a really good situation. We could have scored more, won good balls, real chances from open-play situations or counter-attacking moments, or both. I liked that a lot and I don't expect us to be two or three-nil up or whatever at Brighton. I really respect Brighton too much, so fine for half-time.

We showed the boys a few situations – how we have to play, how we have to defend them. We expect them to change formation maybe again, that's what they usually do against us. The second half started again with a situation for Brighton but then after that we controlled it again, scored the second goal and in the last few minutes, they had a chance. Ali is world-class goalie but from my understanding he should not have to show that in each game. He showed it again and that’s good, that’s why we have a clean sheet. I think we deserved the three points and that's actually all what I am interested in. I am happy about most of the things.

On Diaz's impact since arriving...

So, he is a very good player, let me say it like this. We don’t have groups in our team but there are a few guys who speak obviously Spanish and Portuguese and it helps Luis a lot and they take him under their wings – very experienced players like Thiago, Fab, Bobby, they are all really close to him, Diogo really close to him and that helps. But in general, he's a really nice kid. I am not sure exactly how Harvey Elliott and Luis talk but they are quite a lot together. It means the boys settled as quick as the player. It's not so easy to bring in a player in the winter without any kind of pre-season but with Luis it was so interesting because the way he played at Porto is exactly the way we wanted him to play here, so he didn't have to change really. Still has to adapt in moments, especially defensively, but he has speed and he can carry the ball pretty quick and his dribbling is not bad. I don’t think we saw already his full range of shooting skills. I saw when we scouted him a couple of really nice ones, so there is a lot of space for improvement. But, yes, he is a good player.

On what he made of Diaz's bravery for his goal and the goalkeeper's challenge...

Unfortunately I cannot say anything about it, I saw it once. I spoke now about that situation outside as well. I didn’t see it back. I don’t know if it was a red card or not, but I think it is a very good example for VAR and the issues we still have. The thing is that great goal, top goal and Mike Dean, how it should be on the pitch, probably sees the goal, is not sure, maybe thinks not even about a red card because he knows there's VAR outside. So the linesman, offside, no offside – no offside, goal. And now we have the problem with clear and obvious. This phrase is the real problem in these situations. Obviously everybody asked me today and I didn't start the conversation. Everybody asked me today about was it a red card or not. You know if you get these questions, you know most of the people think it was a red card. OK, if it was a red card and everybody thinks it was a red card, for what reason could it not be a red card then? VAR is looking at it. There is only one reason for it: clear and obvious.

We have a ref who might not make a decision because he thinks there's a VAR, 'So why should I? I have someone with a screen who tells me how he saw it.' He watched it and then in his mind, 'Maybe Mike thought it is not a red card, so it is not clear and obvious.' You can have that view, you can see it like this. That happens constantly. Why [do] we have these discussions after football games if people sit there in the studio? We had the conversation with Mike Riley a couple of weeks ago with all the managers and spoke about these things. The clear and obvious is, from our point of view, a real problem, the phrase 'clear and obvious' because it's wrong or right. It must not be clear and obvious wrong or right, it's just wrong or right – it's enough. Nobody should feel like overturning somebody if the VAR is part of the team of the refs and not somebody from outside who thinks he might embarrass the ref on the pitch with his decision. That would help as well. There’s a lot to do. From us today, it's not important. Great goal, but in general there is a lot of space for improvement for sure.