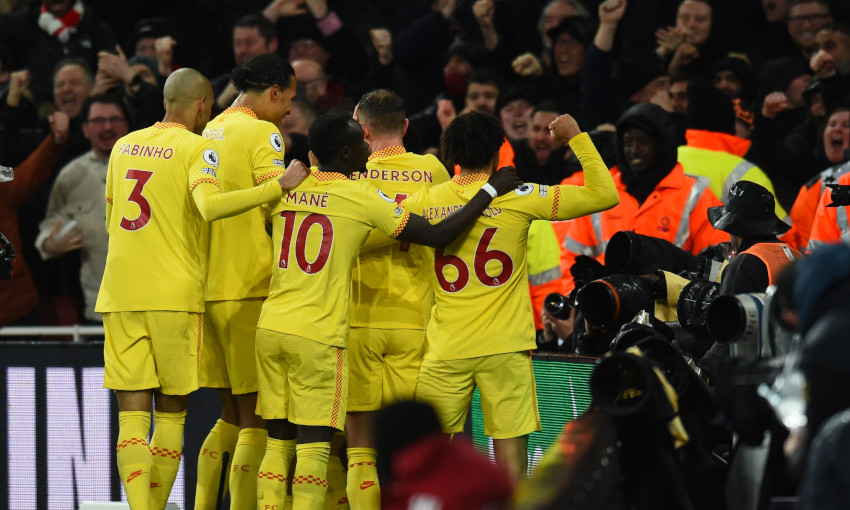 Liverpool closed the gap on Manchester City to just a point at the top of the Premier League with a 2-0 victory over Arsenal at Emirates Stadium on Wednesday night.

After an even first half, Diogo Jota hammered the Reds into a 54th minute lead when he drilled in from a tight angle following a sublime Thiago Alcantara pass.

Roberto Firmino came off the bench to double the advantage nine minutes later, steering in from a Andy Robertson cross with aplomb.

The result was Liverpool’s ninth successive win in the division and means there is now just a solitary point between themselves and City at the summit with the same number of games played.

Two changes were made from the weekend victory at Brighton & Hove Albion, with Jota and Thiago coming back into the starting line-up.

Mohamed Salah was deemed fit enough for the bench after picking up an ankle knock at the weekend. 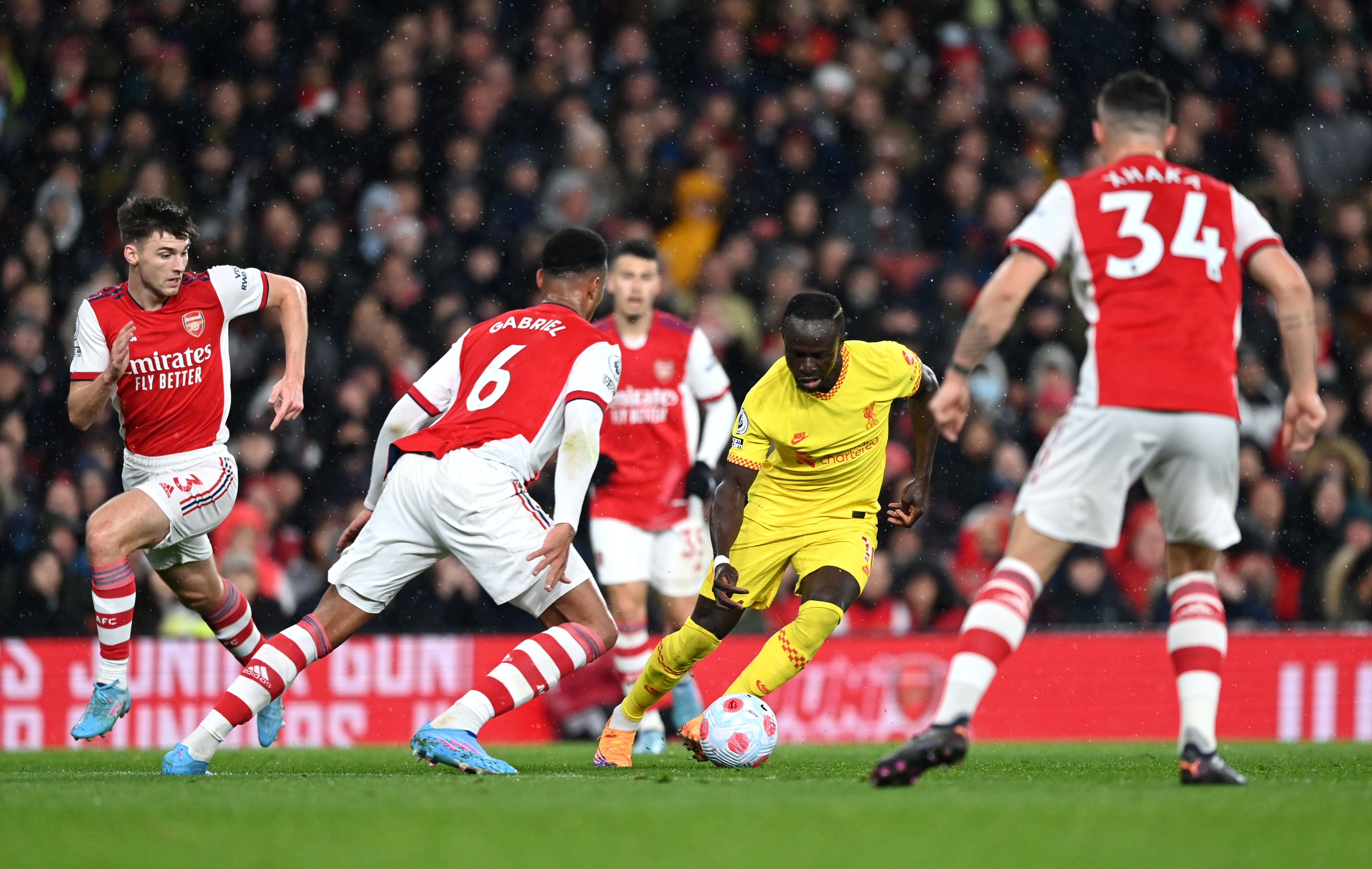 Liverpool began the contest assertively at Emirates Stadium, forcing a succession of early corners in the driving rain. One of which saw Trent Alexander-Arnold pick out the head of Virgil van Dijk, whose powerful downward header was pushed around the post by Aaron Ramsdale with less than two minutes played.

At the other end, Gabriel Martinelli flashed a ball across the visitors’ six-yard box, bypassing Alisson Becker but not the boot of Robertson, who cleared.

Cedric Soares then tried his luck from range, somewhat ambitiously, but dragged wide of the near post as the teams took turns to prob.

Still, there was little for either goalkeeper to contend with neither side able to capitalise on their spells of possession.

Nevertheless, on the stroke of half-time, Alexander-Arnold’s inch-perfect 40-yard ball sent Sadio Mane scampering behind the Arsenal defence and into the box, but under pressure from Gabriel he scooped high over the bar as the half concluded with just the one attempt on target.

Mane did have the ball in the net immediately after the restart, converting from Jordan Henderson’s through ball, but the No.10 was offside.

Martinelli then gave cause for concern as he weaved his way into the area from the left, but failed to pick out an Arsenal teammate in the centre.

Then, on 51 minutes, the Gunners almost went in front when Alexandre Lacazette seized upon Thiago’s attempted back pass. He rolled the ball off for Martin Odegaard, who was left frustrated by excellent recovery goalkeeping from Alisson to tip his effort over the bar. 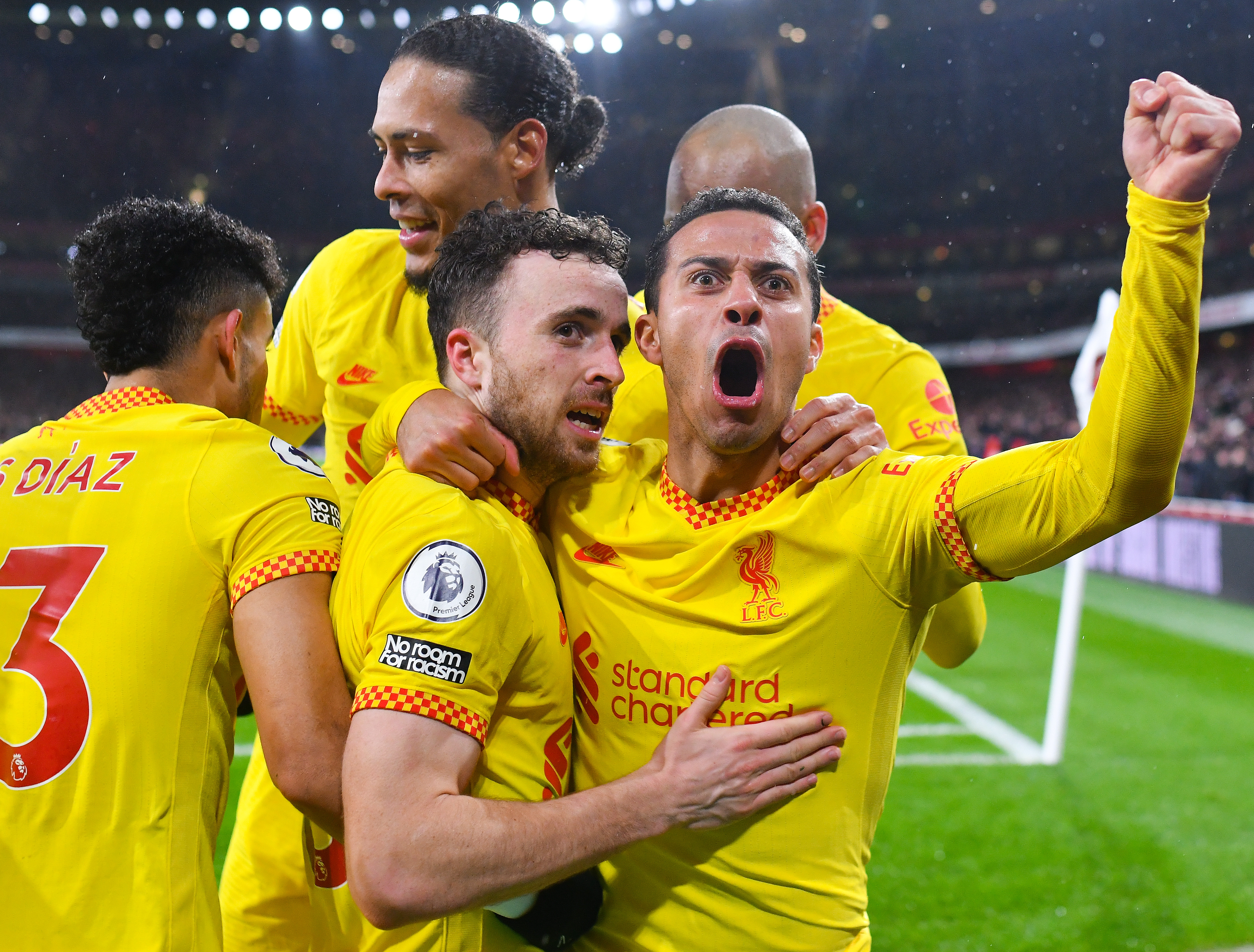 But with 54 played, Liverpool went in front. Thiago sliced open the home defence with a ball into the left channel of the area. Jota raced onto it and hammered a low shot beyond Ramsdale at his near post.

It was the Portuguese forward’s final act as Salah and Firmino replaced him and Luis Diaz in the aftermath – and it wasn’t long before Jürgen Klopp’s side were further in front.

A passage of play that saw a Salah swipe blocked in front of the line continued out on the left, where Robertson charged down Bukayo Saka’s attempted clearance before powering into the area.

The left-back delivered a low ball into the six-yard box, which Firmino clipped over the line with a nonchalant finish from close range.

Martinelli had an opportunity to reduce the deficit in the closing stages, but clipped wide of the far post as Liverpool made it nine from nine and put further pressure on City at the top.