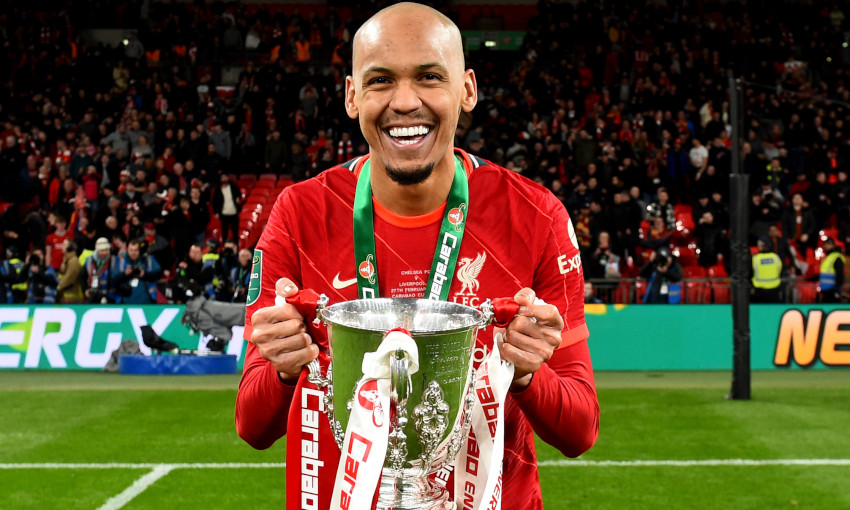 It seems unfathomable now that there was a time when Fabinho flinched at the thought of being a defensive midfielder.

Widely acknowledged as one of world football’s finest current operators in the position, the Brazilian has been an integral figure in Liverpool’s success since he joined the club from AS Monaco in the summer of 2018.

Five major trophies have been collected during his spell at Anfield to date, but his career could have panned out completely differently had he not trusted the instincts and foresight of Leonardo Jardim, his former coach at Monaco.

“He was a very important coach in my career,” Fabinho explained to FourFourTwo magazine in a recent interview. “My first season with him at Monaco [2014-15], I still mainly played as a full-back, but then in a few games he started pushing me into midfield.

“I remember him asking me during pre-season if I’d ever played in that position and I told him I had, so he played me there in a friendly and I was the best player on the pitch.

“Then, before the beginning of the 2016-17 season, Jardim called me for a chat and told me, ‘Listen, I’ve signed Djibril Sidibe to play in your role – from now on, I want you to play as a defensive midfielder.’

“Considering my situation with the national team, plus the smaller pool of top-quality full-backs, I thought it was a negative change.

“It was tough. Everybody knew me as a full-back and I was a regular for the national team there – my agents, and I suppose me to begin with, weren’t happy at all with the situation. I accepted the challenge because I knew I could adapt.

“Looking back, though, that was a life-changing moment. Jardim helped me a lot, and that season we won the Ligue 1 title and reached the Champions League semi-finals. I was in the form of my life and ended up moving to Liverpool as a midfielder.

“It definitely proved to be the right decision.”

Everybody connected to Liverpool would agree.

Following an initial period of acclimatisation to the particulars of the team’s style and system under Jürgen Klopp, the No.3 has become a practical ever-present in the XI, his reading of the game and command of possession gaining him huge plaudits.

Asked about his status, Fabinho said: “It’s more than I could have imagined when I started back home in Brazil, but I don’t give too much thought to it – because the most important thing for me is to help my team achieve the results we want and convert them into trophies.

“Ultimately, that’s what’s going to make a fan remember you in the future: ‘You know when Liverpool won the Champions League? Fabinho was part of it.’”

The 28-year-old recently surpassed 150 appearances for the Reds and, of course, added the Carabao Cup to his medal collection at Wembley last month.

Klopp’s men return to action this weekend, resuming a campaign in which three more trophies are in their sights as they chase Manchester City in the Premier League and prepare for a Champions League quarter-final and Emirates FA Cup semi-final.

For Fabinho, there is simply no place he would rather be.

“Liverpool is a special place – there’s nowhere better to play football, so my head is fully focused here,” he added.

“I don’t know what my situation will be like in four years, but at this moment I only think of Liverpool. I don’t think about moving to another team or country because I’m very happy here. It’s a special club and, most importantly, one which fights for every trophy.

“What I want for my career is to be part of a competitive side and win as much as possible. And the best place to do that is definitely Liverpool.”