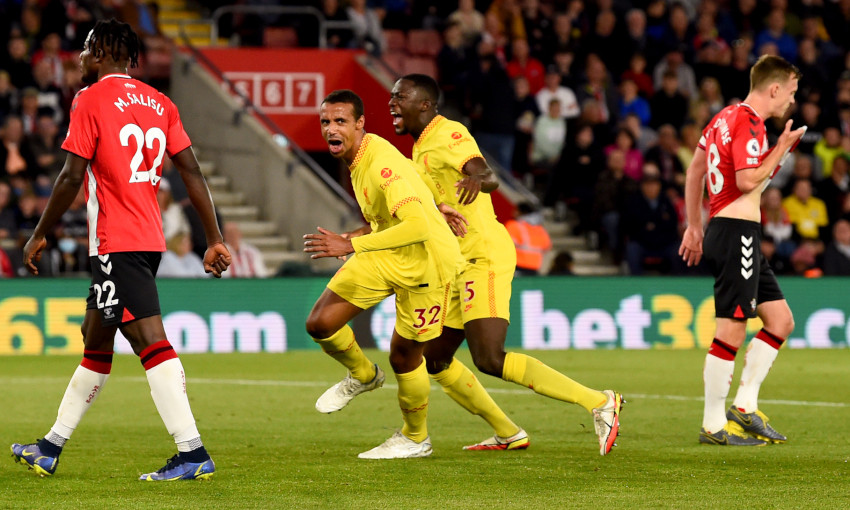 Liverpool earned a battling 2-1 victory over Southampton in the Premier League at St Mary's Stadium on Tuesday night.

The Reds moved one point behind Manchester City in the race for the top-flight title with one game remaining.

Saints winger Nathan Redmond opened the scoring on the south coast, but goals from Takumi Minamino and Joel Matip secured a vital three points for Jürgen Klopp's side.

Roberto Firmino, Diogo Jota and Minamino completed the alterations made from Saturday's Emirates FA Cup final win over Chelsea at Wembley as Klopp opted for nine changes in total.

Alisson Becker and Ibrahima Konate were the only two players to retain their places in the XI.

The game endured a quiet start with both sides exchanging just one chance each in the opening 10 minutes.

Milner saw a shot blocked before Alisson saved low from a tight angle as Armando Broja burst into the area.

Saints, though, broke the deadlock in the 13th minute after Liverpool thought Jota had been taken out in the build-up to the opening goal.

Redmond advanced after play was waved on and his deflected effort fell into the far corner of the net following the swift break.

The Reds quickly responded through the head of Firmino; however, the offside flag denied the Brazilian from a Tsimikas free-kick.

Minamino's low shot was saved by home goalkeeper Alex McCarthy as pressure was being applied, before the Japan international hauled Liverpool level just ahead of the half-hour mark.

The No.18's emphatic finish from inside the area completed a clever move by Klopp's charges as Jota laid off a Gomez ball into his onward path.

Jota and Milner then both saw chances blocked as Liverpool asserted their dominance, with Jones also shooting wide.

James Ward-Prowse was forced to clear from underneath his own crossbar ahead of the interval after Firmino prodded a dangerous low ball across the six-yard box.

The match continued in much the same pattern after the change of ends amid the introduction of captain Jordan Henderson from the bench.

Jota's snapshot flashed wide of the far post from Tsimikas' low cross, before Elliott hit the side-netting after a quick move.

Southampton were offering more the other way than they had previously, though centre-back pairing Matip and Konate were proving decisive figures in sweeping up any loose balls.

Jones and Jota again went close while Firmino struck a driven effort straight at goalkeeper McCarthy with the Reds searching for a winner.

Divock Origi was the next man to enter the match from the sidelines, but it was Matip who provided the vital intervention to earn a deserved lead.

The defender reacted quickest to Tsimikas' deflected corner ball to loop a header home into the back of the net and spark wild celebrations with a little over 20 minutes remaining.

Konate almost added a third late on thanks to a header of his own while Alisson was forced to save from another Redmond shot from distance.

The Reds, though, secured the spoils to ensure the Premier League title will be decided on the final day of the season.