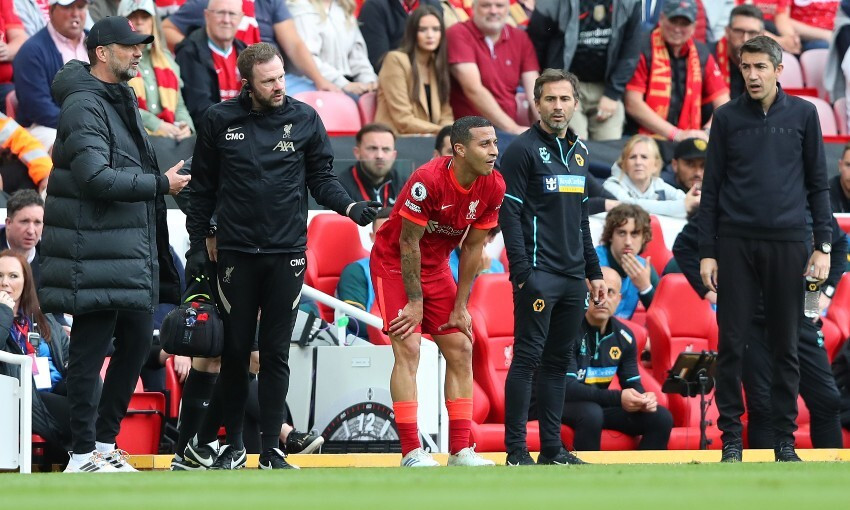 Liverpool are awaiting further assessment of the injury that forced Thiago Alcantara off the pitch during Sunday’s 3-1 win over Wolverhampton Wanderers.

The midfielder left the field shortly before half-time after pulling up and was replaced by James Milner during the interval.

Asked for an update on Thiago's condition, Jürgen Klopp told his post-match press conference: “Not good, but I can’t say more. He was outside with the families, had his little girl on his shoulders, so he could walk, that’s obviously a good sign. All the rest we will see from tomorrow.

“[It’s the] lower part of the body. I know it, but actually don't want to talk now about it. We will see.

“Give us a chance to have the [scan]; it makes the news not better or worse. We want to wait until we know more about it and then you will get the information as well."

Liverpool were also without Divock Origi for the final-day encounter with Wolves – and Klopp confirmed the striker will not be available for next weekend’s Champions League final with Real Madrid in Paris.

“Div is definitely out for the final because he [got] injured in the last second of the last session yesterday,” said the boss.

“He got a muscle injury, so five days will not be enough for him. Apart from that, I think all have a chance - and hopefully Thiago as well - and then we will prepare."