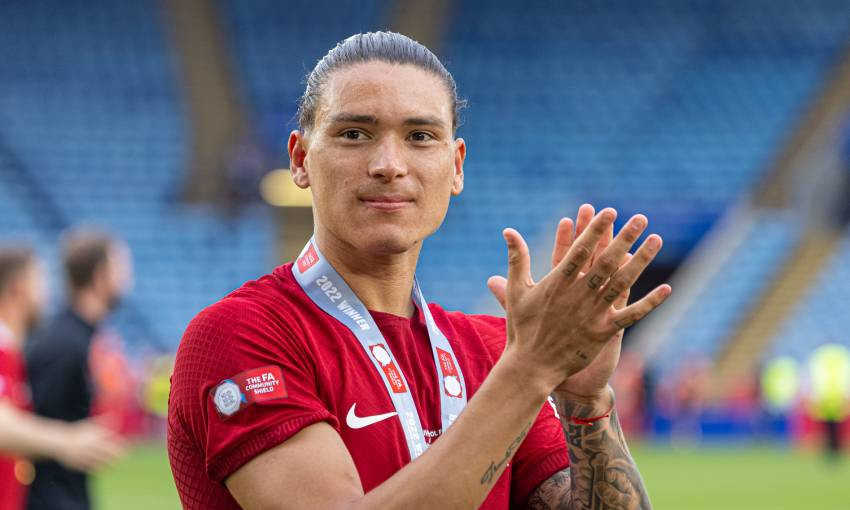 Darwin Nunez is looking forward to the chance to build on his encouraging start at Liverpool as he prepares to begin his Premier League career.

The striker's first competitive game for the Reds, last weekend against Manchester City in the FA Community Shield, ended with him on the scoresheet and lifting silverware following a 3-1 victory.

They're acts the summer arrival from Benfica wants to repeat consistently throughout 2022-23, with Jürgen Klopp's men kicking off their domestic league campaign away at newly-promoted Fulham on Saturday lunchtime.

"It’s always a lovely feeling to win things, isn’t it?" Nunez told Liverpoolfc.com from the AXA Training Centre. "And the one we lifted the other day was the first one that I’ve won.

"So now I’m going to keep working hard every day in training because this is just the beginning.

"It’s a long road ahead, which is also full of ups and downs, and that’s why I need to prepare well, because I want to keep on lifting trophies and winning lots of titles."

Read on for the rest of our chat with the No.27 as he reflects on the early stages of his Liverpool career and previews the trip to Craven Cottage...

Darwin, how have you found your first weeks at Liverpool?

Things have been going very well. I was a bit nervous at first, since it was all new to start with. It’s a bit like when you leave one school to go to a new one, with all new classmates – it was more or less the same as that. But then as the days went by, I felt really relaxed with my teammates. They really gave a lovely warm welcome. Because when you’re the new guy you do feel a bit nervous, and even more so when you don’t know the language. You want to communicate and you just cannot. You want to try to understand but you don’t understand anything at all when they’re talking. But then Milner speaks Spanish, Thiago and the Brazilian lads, as well as Luis Diaz, who only arrived a short while ago too. So, I’m now feeling very well and much more relaxed and at ease here, and definitely not as nervous as I was in the first few days.

Which members of the squad have been helping you settle in and adapt?

Firmino, Fabinho, Luis Diaz and Fabio, who only arrived recently too. Then the rest of my teammates too, they all made me feel right at home, all of them. I don’t speak or really understand English but being honest, we are making each other understand using sign language! It was the South Americans who helped me the most at that time when it came to integrating with the rest of the group. But it’s going well. Even now they’re the guys who I tend to get together with the most because then I can maintain a fluent conversation, because I can hardly speak a word of English to you right now.

But as time goes by, I’ll be trying to learn English and then I’ll be able to converse more with the English-speaking players. I really do want to learn English because English is very important in everything. So when I’ve picked more of the language, I’ll then be able to speak to everyone in English.

You were part of the training camp in Austria – how beneficial was it to be able to learn how the team plays, but also to spend so much time with your new teammates?

Yes, we were in Austria for seven or eight days if I recall correctly, and it was great because that was where I was becoming more used to the training sessions, as well as building up a greater understanding with the players also. For example, with Salah who plays up front too, as well as the guys who play in the midfield, like Fabio and also with Hendo. Hendo also tries to spend a lot of time talking with me.

Thiago helped me enormously when I arrived. He’s always passing on the instructions of the manager when we’re doing a drill in training and about to work on something and I don’t get the explanation at all. I go and stand by Thiago or the Brazilian lads and I ask them what we have to do and then they explain it to me.

So yes, this pre-season has been really useful for helping me to get to know my teammates. As the days have gone by, I get to feel more and more comfortable and at ease. Right now I’m very calm and relaxed and feeling much more confident.

A brilliant photo emerged of you with a huge fish in Austria after a group of you went fishing. Be honest, did you catch anything that day?

To tell you the truth, it was Kostas who caught that first one, which weighed 120, and it was too big for one person to be able to pick on their own! We have the photo to prove it, with all of us holding the fish. Then it was my turn, and I caught the fish that I was holding in the photo on my own. Then Alisson caught the fish he was holding in his picture. So pretty much everyone who went fishing caught something, but Kostas was the real king as his was the biggest in there.

How much did you enjoy scoring your first goals against RB Leipzig?

I enjoyed it hugely because I wasn’t expecting to score four goals. After Salah gave the penalty to me, that was great on his part, it was a really nice gesture and I dedicated the first goal to him, because he handed the ball to me to take the kick. I was feeling confident, so I grabbed it and took the shot. And then came the other three goals that came after, which were a bit of a surprise, given that we were up against a good side in a very difficult game.

Fortunately, I managed to get the four goals and so I went back to the hotel feeling very satisfied and very happy. My teammates were all congratulating me, so at the time you feel really proud and pleased with yourself. As soon the game finished, the first people that came into my thoughts were my son and my partner.

Did you feel any pressure to score early on in your Liverpool career, or are you a striker that looks at the bigger picture, rather than just goals?

I think a striker always lives off scoring goals, but I think you try to go out onto the field to do the very best you can to help the team. If the goals do come, by all means, bring them on. But if they don’t flow, what are we going to do, other than keep working hard to be ready for the next game? You have to say that this is really just the beginning. Things went well for me last Saturday against City, I managed to score a goal and I won the penalty, but I don’t have to feel any added pressure right now that I have to play well and be scoring in every game.

What I do have to do is train every day and when matchday comes around, give my very best so things go well for us as a team. Because here we win together, and when we lose, we lose together. If things go badly, then we suffer together. It’s what I always say, this is a group of players and we always have to stick together as one. It’s great that here the support you get from the rest of your teammates is huge.

You made a big impact in the Community Shield – how much did you enjoy that experience?

When the goal went in, I didn’t quite know how to celebrate it. I pulled off my shirt and I started to celebrate with a huge release of adrenaline and fury. I was overjoyed at that moment and, as always, I dedicated the goal to my wife and my son.

What was going through your head when you ran to celebrate your goal?

I was saying to myself, ‘How good is this, playing against City and scoring your first goal in a final?’ Lots of thoughts come into your head at a moment like that. First goal, against a top side, in a big game, I just didn’t know how to celebrate it! So I just thought, pull my shirt off and just go for it and celebrate to the maximum, because it was a key goal in an important game for my career and I’m sure it’s one I’ll remember for the rest of my life.

What was it like to celebrate in front of your new supporters? You know if you score this weekend, you need to keep your shirt on…

No, no, I’ll be more cool and calm from now on. It was just right then I didn’t know what to do to celebrate it and, as I said before, it was the adrenaline that made me rip off my shirt. Now I wanted to thank the Liverpool fans because when I went out to start my warm-up, they were chanting my name, ‘Nunez, Nunez’ and it gave me goosebumps. They were also singing my name during the game itself, and that’s really important for a player as it calms you down and gives you a boost in confidence out on the pitch too. So, thanks to all of them once again because they made me feel really good.

What excites you about starting life in the Premier League at Fulham on Saturday?

Firstly, we still have to train hard the rest of this week and prepare well for the game. I always say that there are no easy games at all, and the Premier League is a very competitive league full of good sides. Every game is a challenge and you have to go out there from the very first minute with all the desire in the world to try to win the game. Things can change at any moment. You can concede and then no matter how you keep trying, the other team can defend well and you find the three points slipping away. That would be something that would be really frustrating, of course, if you’d been trying so hard and things don’t work out in that game because of something like an unfortunate error.

It’s going to be a great season and a very competitive one, and we have to be just right both physically and mentally because we have the league and the Champions League, which takes a lot out of you as a player. We have to ensure we are in top form in body and mind.

What is your personal target this season?

To be honest, I never really set myself a goals target. Of course, it’s great and very welcome if the goals are flowing and I’m scoring. But no, I never set an exact figure. My target currently is for things to go well for me and to give everything I have for the team and this group of players, and that at the end of the season we can be lifting a trophy. That’s what I want and what everyone wants here at Liverpool.