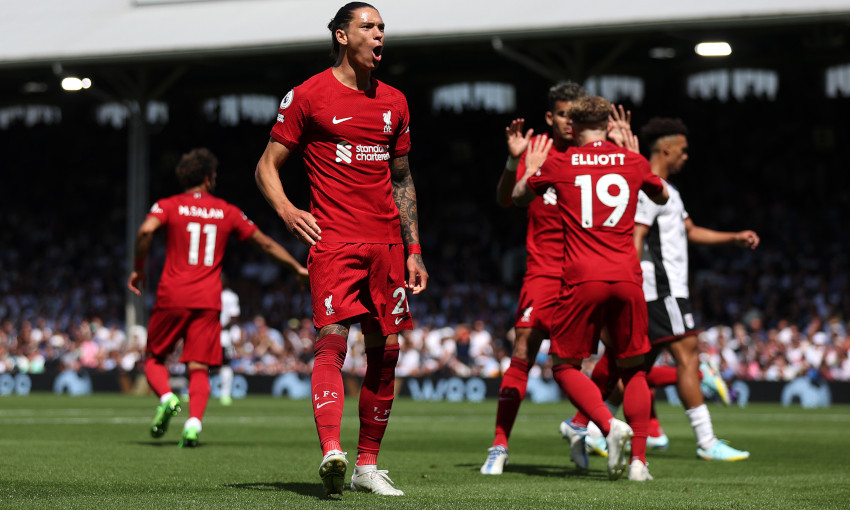 James Milner believes Liverpool could be feeling the impact of Darwin Nunez's summer arrival on Merseyside for a long time.

Nunez made his presence felt immediately during his competitive debut for the club, stepping off the bench to score the third goal in a 3-1 victory over Manchester City in the FA Community Shield.

The No.27 followed up by finding the back of the net in his first Premier League outing last weekend – again as a second-half substitute – in a 2-2 draw against Fulham in the season-opener at Craven Cottage.

"I think he'll have an impact the whole time he's here, to be honest," Milner told Liverpoolfc.com of Nunez's recent arrival.

"Since he's been here, he's [been] impressive on the field, worked hard, makes great runs [and] is desperate to put his head on the ball in the box.

"If you put a ball in there, he'll do everything he can to get on the end of it – good finisher, both feet and he's different to the other boys up there.

"We've already got some very exciting attacking players who can cause problems, so he's a great addition. He'll be fantastic for us.

"You want options up there, you want to cause people problems, you want to have options to play different ways because obviously teams are going to watch us and try to stop us, so it's important we can do everything. With the options we have up there, I think we have a fantastic mix."

Nunez is one of three senior arrivals to Anfield this summer alongside Fabio Carvalho and Calvin Ramsay.

On Klopp's dressing room being a welcoming place for new faces, Milner added: "It's pleasing to see.

"That atmosphere we have within the dressing room obviously starts with the manager and the atmosphere around the club, that helps players hit the ground running.

"You've seen it numerous times. You've seen it when Virg came, obviously new in the middle of the season coming in and playing so well straight away mid-season... hopefully Darwin is the same.

"He scored a couple of goals in the last few weeks, so hopefully it continues for him. That's credit to the boys and the people around the club for making people feel comfortable straight away.

"It is a big change for them but it's also the work that is done on the training ground. Obviously getting them to know how we want to play and then feeling comfortable in how we play, so a lot of work goes into that and hopefully it can continue, and Darwin can keep thriving."

Behind the scenes of Darwin Nunez's Liverpool arrival

Darwin Nunez: I came to Liverpool to win trophies – I want to win a lot

Jürgen Klopp: Nunez has all the pieces we want – now we’ll nurture that talent