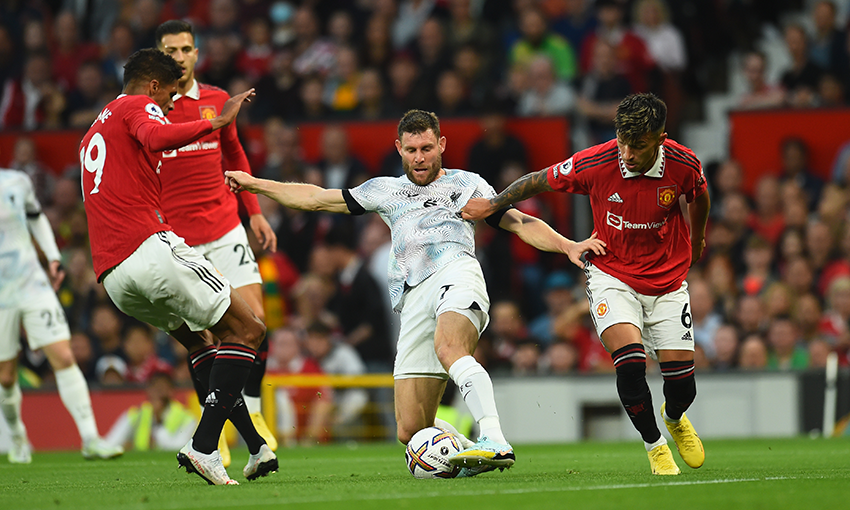 Liverpool were beaten 2-1 by Manchester United at Old Trafford in the Premier League on Monday night.

Jadon Sancho put the hosts a goal up inside the opening 10 minutes before Marcus Rashford made it 2-0 not long after the break.

Mohamed Salah did pull one back for the Reds towards the end but Jürgen Klopp's side suffered their first defeat of the 2022-23 campaign.

Liverpool made three changes for the contest as Joe Gomez slotted into centre-half, with Jordan Henderson and Roberto Firmino returning to the XI.

As you would expect in a fixture between the two clubs, there was a lively start.

The hosts created the most during the opening phases and struck the post before their eventual opener.

Anthony Elanga's finish from a Bruno Fernandes through ball hit the woodwork and bounced clear, much to Liverpool's relief.

But six minutes later, United went ahead. Tyrell Malacia played a one-two with Christian Eriksen before delivering a cut-back into the middle of the area. The ball found Sancho, who successfully evaded the sliding James Milner with a dummy to then convert.

Luis Diaz nearly provided an immediate response but curled wide, while Gomez kept it at 1-0 with a perfectly-executed challenge to deny Rashford.

The Reds improved as the half went by and could've grabbed an equaliser four minutes before the break.

Milner met Trent Alexander-Arnold's corner from the right, with Fernandes' attempted clearance only kept out of United's goal by an inadvertent block from Lisandro Martinez.

With Liverpool players committed up field, Anthony Martial picked up possession near the centre circle and spun to play Rashford through on goal.

The United forward, who evaded the offside trap by the finest of margins following a VAR review, kept his cool to slot beyond Alisson Becker.

Diaz nearly produced a quick reply but saw his close-range poke kept out by David de Gea. At the other end, Alisson produced a strong palm to turn behind another Rashford attempt for a corner.

As the visitors continued to search for a route back into the affair, Harvey Elliott struck the side-netting before Fabinho's header off a corner forced De Gea into a low save.

Liverpool did receive a much-needed lifeline nine minutes before the end.

Fabio Carvalho's shot in the aftermath of a corner was saved by De Gea, only for Salah to react quickest to the rebound and nod in to make it 2-1.

However, Klopp's men were unable to fashion a chance to earn a point in the time remaining.