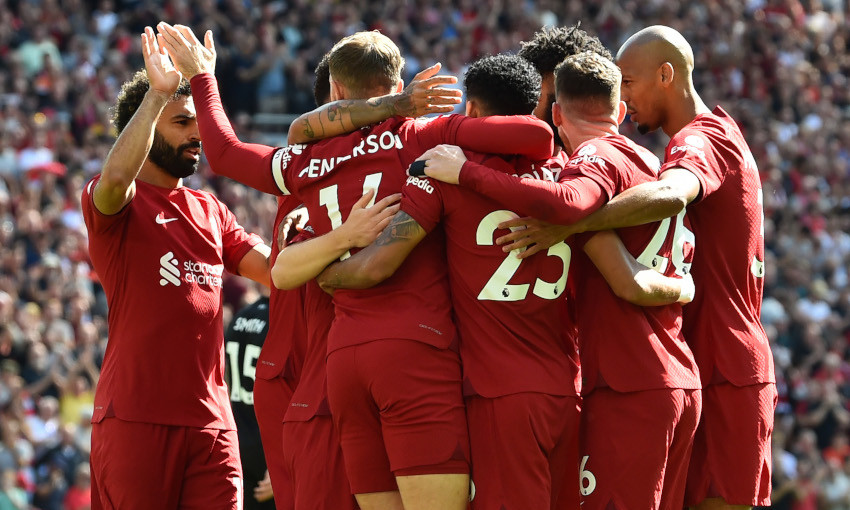 The Reds struck twice in the opening six minutes to set the tone for the afternoon, with Luis Diaz heading in from a Roberto Firmino centre before Harvey Elliott swept in with a wonderful first-time effort from the edge of the box soon after.

Trent Alexander-Arnold rasped in a third just before the half-hour mark, finding the top corner from distance, before Firmino nudged in the fourth moments later from a deflected cross.

Virgil van Dijk headed in from a corner prior to the break and Chris Mepham turned an Alexander-Arnold cross into his own net seconds after the restart as Jürgen Klopp’s side furthered their advantage. Firmino then grabbed his second, profiting after Mark Travers failed to hold an Andy Robertson shot.

Fabio Carvalho claimed his first goal for the club when he volleyed in from Kostas Tsimikas’s lay-off and Diaz headed in Liverpool’s ninth – and final – goal before the conclusion to equal the division’s record win.

Liverpool made just one change, with Fabinho returning to the starting XI in place of James Milner.

With Anfield bathed in sunshine, Liverpool set about immediately showing a response to the disappointments of Monday evening, with home supporters in fine voice.

And fans didn’t have to wait long to crank up the decibel levels even further when the Reds took the lead inside three minutes.

Firmino stepped away from a defender on the right before hoisting a cross in the centre, where Luis Diaz was on hand to head home from six yards out.

A VAR check for offside followed, but goal was allowed to stand – and the hosts wasted little time in furthering their advantage.

With six minutes gone, Elliott pounced on the ball on the edge of the box and send a first-time shot curling beyond the reach of Travers and into the far corner. 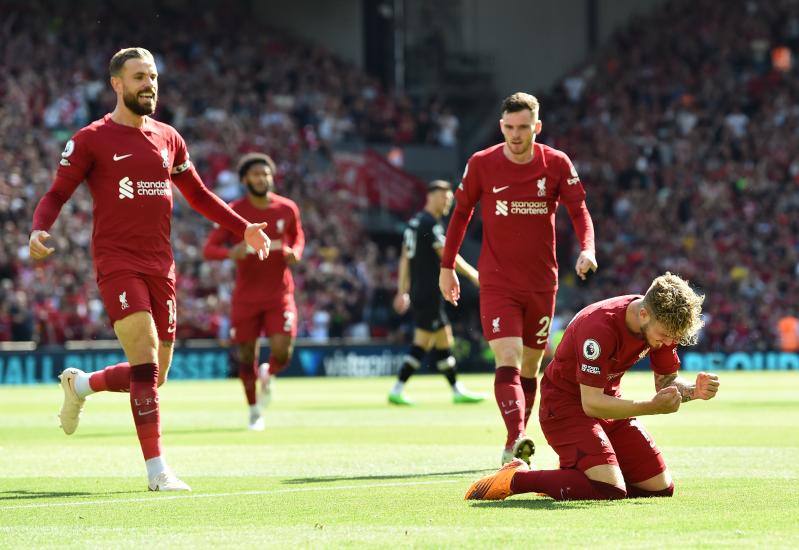 Liverpool were in full flow – and a third should have arrived when the goalscorers Firmino and Elliott combined sublimely to open their opponents up on the left of the area. The latter’s ball across the face of goal found Mohamed Salah, but he uncharacteristically scooped over the bar.

The Egyptian was then denied by Travers, who tipped his right-foot effort from an angle over the bar.

The visiting goalkeeper could do nothing, however, when Alexander-Arnold took aim just before the half-hour, unleashing a swerving drive into the top corner from just outside of the box after tenaciously winning possession back.

The Reds added a fourth almost instantly – albeit in somewhat unusual circumstances – when Salah’s pass deflected off Marcus Tavernier and looped into the area, allowing Firmino to steal in between Mepham and Travers and nudge in.

Robertson then headed over unmarked from an Alexander-Arnold delivery, with the home side’s pursuit of goals showing no signs of let up.

Salah next volleyed over from a corner and Firmino had a low shot tipped around the post by Travers, but a fifth would arrive before the interval.

Van Dijk was the identity of the scorer, rising highest to plant Robertson’s corner into the back of the net from the penalty spot.

It was the first time since September 1958 Liverpool had scored five times in the first half of a league game.

Carvalho replaced Elliott during the interval – and the Reds had a sixth seconds after the restart, with Mepham knocking a wicked Alexander-Arnold delivery into his own goal with Luis Diaz lurking.

Firmino grabbed Klopp’s men’s seventh of the afternoon when he pounced on Travers’ attempts to keep out a Robertson shot and turned into the net from close range. 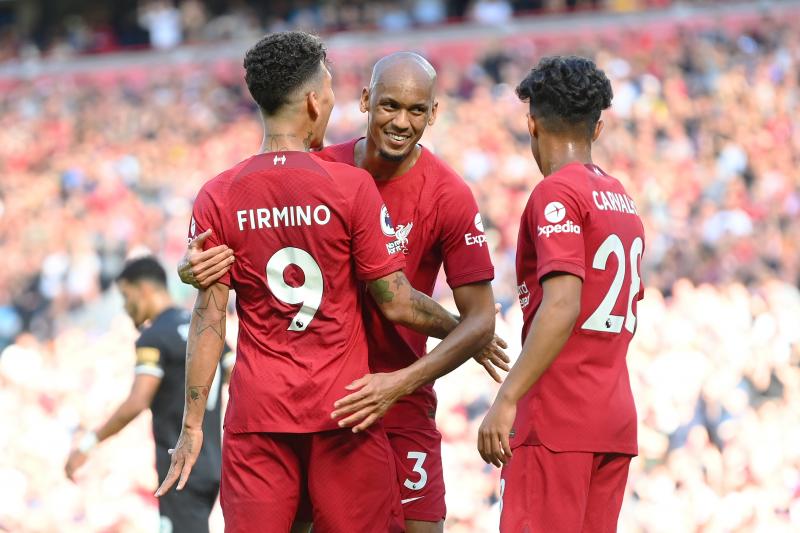 Salah went close to goal number eight, but shot over the bar after Fabinho’s clever pass over the top put him in behind.

Nevertheless, Carvalho’s unerring finish from Tsimikas’ touch off following an exquisite Alexander-Arnold cross-field ball did extend the scoreline further – before Diaz headed in No.9 with five minutes of normal time remaining, equalling the Premier League record.