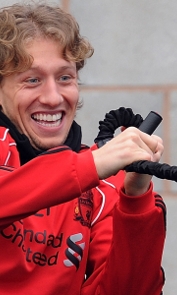 Lucas Leiva has lifted the lid on how Kenny Dalglish has transformed the atmosphere in Liverpool's changing room.

The Reds have collected 25 points from a possible 39 since Dalglish took over in January - and Lucas has become the latest player to hail the job being conducted by his Scottish boss.

"Kenny has been really important for me because he's given me a lot of confidence," said the Brazilian. "He's a manager that doesn't say a lot but when he does say something it's spot-on.

"Kenny is the key to keeping everyone together. One of the things I really like about Kenny is he treats everyone the same. It doesn't matter if you are young or a senior player, everyone has the same importance in the club and it gives everyone a big lift.

"We're more united. The relationship is not just professional, we have become more friends than before and it's helped a lot on the pitch. When you like your teammates you try to help them a lot and that's what we are doing. This period has been really good."

The upturn in form since Dalglish retuned has included victories over Manchester United, Chelsea and Manchester City.

Results over recent months have left the Reds five points behind Tottenham in the race for a Europa League place - with the two sides due to meet on the penultimate weekend of the season.

Lucas added: "We are still trying to catch fifth place. We know how difficult it will be but we have to make sure we win our games and then see what happens.

"At this moment it is very difficult because Spurs still have a game in hand and are five points ahead but they have difficult games to play and we play against them. We have to make sure we win our games. We're delighted to be in a comfortable position but we have to fight and believe."

Aldridge: Lucas epitomises what LFC is all about

Stevie on Lucas: I smile when I think of him