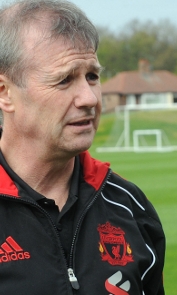 Liverpool Ladies are back in action today away at Bristol Academy - and the message from manager Robbie Johnson is loud and clear: 'Our season starts now.'

The Reds crashed out of the FA Cup semi-final at the hands of Bristol last Sunday, before Birmingham inflicted their first Women's Super League defeat of the new campaign by running out 4-0 victors at Skelmersdale on Wednesday.

Johnson admits the ladies have not been at their best so far this term, but as he tells Liverpoolfc.tv, he believes a victory at the Stoke Gifford stadium this evening can kick-start their season.

Well Robbie, it was another bad day at the office against Birmingham. What was your take on it?

Birmingham were the better team. They had far more experience and better players - seven or eight of them are in the England setup and they all started. They had quite a lot of possession and territory in the first half, but in the second we were more competitive and played the game a lot more in their half and gave the goalkeeper more to do. However, all four goals were down to our mistakes; two were penalties, one was a deflected shot and one was a square ball in midfield which was intercepted and played through. We contributed heavily to the four goals. They had quite a few other chances, we had some chances, but we can't complain. Nonetheless, the performance was far better than Sunday's and Birmingham are a particularly strong team.

What will you do to eradicate these individual errors because they seem to have been a recurring theme in your last three matches?

Out of the 10 goals we've conceded, nine are directly down to what we've done. We spoke about it at half-time and after the game. It doesn't matter about team shape or tactics if individual errors are catching us out. What we've got to do is ensure the players' minds are on the game all of the time. The players took a little bit of time to warm up against Birmingham and, as a result, the first goal we conceded was from a horrendous pass across the face of goal which caught the 'keeper out and it's got to stop. We were in the game up until that point, but then we had five minutes of madness and found ourselves 2-0 down. We have got to maintain our level of focus and concentration to stop giving away silly goals and then folding on the back of it.

Again a slow start proved costly. Is there a reason your side are struggling to get going?

It's down to the mindset. The players have got to change their mindset in order to go hammer and tongs from the start. So far in our three games, I have tried being laid back with them and taking it easy, I've been high intensity with them and I've tried raising the volume. They are three different methods and I am going to try a fourth one on Saturday. It wasn't as abject against Birmingham as it had been on Sunday against Bristol, but they're a physically strong team. We didn't compete enough, but at least in the second half we had a go and pushed forward, which we've always got to do because sitting back and trying to minimise the score isn't my style and you're never going to win a game like that.

How have the last two results altered your thoughts tactically?

They've altered my way of dealing with the defensive structure, yes. That's to remind the players that you win and lose as a team, but individual mistakes are costing us goals in matches. Both Bristol and Birmingham scored against us when we were not paying attention, so we can't be worrying about the opposition when it's our own mistakes that are causing us problems. We have to focus on what we're doing. If we get beat by a better team who have outplayed us and scored some wonderful goals then that's fine, but we shouldn't be contributing to goals against us by sloppy play.

On a positive note, the second-half performance was much better. Does that give you hope?

Yes, definitely although hope is probably not the word I would use. The players' were euphoric - and it was theirs and not mine because I'd like to consider myself level headed when it comes to results - following the draw against Everton, and that goes to show maybe we knocked a bit of stuffing out of them because they struggled with Doncaster - a team we beat 3-0 at a canter three or four weeks ago. The only thing consistent about the Super League at the moment is Birmingham seem to be the top team. But I believe the players have shown we can do it - as proved against Everton.

Bristol are next up in the league. How will you approach this one given their FA Cup win over us recently?

The FA Cup win was a one-off game. What our players have got to realise is that after our two defeats, the season starts now. We have to get going. I don't believe we'll be looking for 'revenge' and Bristol will be after the three points just as much as we are. We believe we are capable of beating teams like Bristol, and now we have to go out and prove it. It doesn't matter what people say, it's about actions now. Words can make you come crashing down, but if you put your words into actions and actions into results then that's the best way to make statements.

Finally, how are you looking squad wise? You made a few changes against Birmingham...

Yes, I gave one or two players a rest in midweek, so what I will do is consider those players after I've spoken to them. But I am certainly looking at having a more attacking line up. As a team, we have to get forward more.

Bristol Academy Ladies v Liverpool Ladies kicks-off at 6.30pm at the Stoke Gifford Stadium. Tickets can be purchased on the gate and are priced £6 for adults and £4 for concessions.