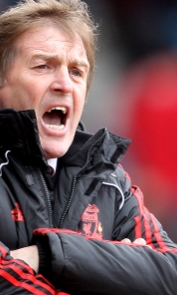 Kenny Dalglish today admitted the Reds are heading into an important summer as they set their sights on the top of the Premier League.

The Liverpool manager has been impressed with the performances of his younger players over recent weeks as the club have coped with a series of injuries to established first team players, but he insists big decisions lie ahead in terms of where to look to strengthen the squad.

"Every football club after May knows where they stand," he said. "You know what you need and there's always going to be business done. If you do good business, you've more chance of being successful.

"That doesn't just mean buying players and letting players go, it's about developing what else you have. This summer is going to be very important.

"If we're convinced we have young players who are maybe better than what's available, then we'll keep our younger players.

"But that's not to say we don't want to improve as a football club in any way.

"We do need to leave some path open if we think there are players who can come in. If they develop then fine, if they don't, we've got a problem. But if you buy a player in and he doesn't produce, you've got a bigger problem."