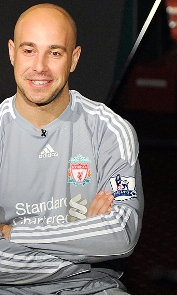 Pepe Reina claims he has a point to prove next season - and that many of his teammates feel the same way.

In an interview with LFC Weekly, the Spanish stopper admits he has not been on top form this term.

"I know I could play a lot better," said the 28-year-old, who has appeared 305 times for Liverpool since arriving from Villarreal in 2005.

"Throughout the whole year my levels must improve. I am looking forward to the next one to prove myself again. I think, as a squad, we all feel the same - as individuals and as a group.

"Nobody is the perfect player - you are always learning. I have played 450 games, which is a lot for someone my age. I am happy but I would like to play another 450 games at the highest level."

A 5-0 thumping of Birmingham City of Saturday left Liverpool three points shy of a Europa League spot - though Tottenham have a game in hand.

Reina knows the Reds have momentum after scoring in 16 successive league games since the turn of the year.

He believes securing continental football for 2011-12 would have many benefits.

"Sometimes you hear people talk about the Europa League," he said. "They say there is no point being in it, but I think the competition has helped our youngsters; Martin Kelly, Jay Spearing, Danny Wilson.

"Maybe they wouldn't be ready to play in the Premier League now if they hadn't experienced the minutes in Europe.

"Probably one of the biggest positives of this season is seeing young players like these. Players with big futures get a chance and prove themselves.

"That is why until the end of the season we will fight."

At 28, Reina is still considered a youngster in the goalkeeping fraternity, but that's not to say he hasn't given some thought to life after football.

"I will always be involved in the game - coaching, media, whatever," he said. "I know there have been few goalkeepers to become top managers, which is strange because they spend so much time trying to watch the game, concentrating.

"Maybe it's because we dive too much during our playing careers - suffer knocks. Afterwards we want to play golf and relax a little. But I am not like that. I like golf, but I like football more."