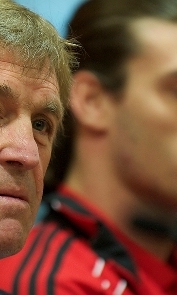 'Cole goal could be massive'

Kenny Dalglish has confirmed he will check on the fitness of Andy Carroll before deciding whether the striker can face his former club Newcastle on Sunday afternoon.

The No.9 picked up a knee injury in the 1-1 draw at Arsenal a fortnight ago and the Reds boss admits he remains uncertain over whether the club's record signing will be available.

Dalglish told a pre-match press conference: "We don't know if he'll be fit. It's only Thursday so we've got a few days before the game.

"I don't think nature knows it's his old club Newcastle, so if he's not fit, he's not fit.

"For Andy it's a poignant game but if he's not fit, he's not fit. We can't do anything about that."

Newcastle are currently 11th in the standings and have made a solid return to the topflight following their promotion from the Championship last season.

Dalglish has been impressed by the way they have gone about their football this term - despite the disruption of a change of manager and the loss of Carroll on the final day of the January transfer window.

He said: "I think they've had a very good season. They are newly promoted and had a change of manager. There was a lot of furore about it but he's gone on and done very well.

"In the January transfer window he (Alan Pardew) lost Andy who came here and they didn't have an opportunity to replace him because they ran out of time. So I think they can be well satisfied with what they have done this season."

He added: "You get the reward for what you do on the pitch. If you aren't good enough then the number of points you get is going to fluctuate. Whether that takes you towards relegation or towards a European spot depends upon how you are playing.

"The fans up there are fantastically passionate. It's a fantastic football club and a great place to ply your trade as a footballer. But results have been inconsistent (over the years) and they've had new owners, so they've had a lot to put up with.

"But this season they'll be delighted with how they've done, especially when they came back from four down against Arsenal.

"It's a fantastic place to be involved in football at. I enjoyed my time up there and have some very fond memories of working there."

Liverpool head into the clash with the Magpies on the back of a nine-match unbeaten run at Anfield under Dalglish.

The Reds have been in imperious form in L4 and secured their biggest triumph of the season when they overwhelmed Birmingham City by a 5-0 scoreline last time out.

The boss admits he has been pleased with how his players have performed on home turf and feels the next step is to reproduce that on their travels.

"You cannot have great home form and terrible away form," he said. "You need to marry the two together.

"We've had a lot of positive results at Anfield and that's a step in the right direction. We know that if we can do it at home then we can do it away too.

"The away form is something everyone would like to improve upon and if we do there will be a better chance of being successful."

Despite a spate of injuries to several first-team regulars Liverpool have continued to progress under the leadership of Dalglish.

The Scot has been hugely satisfied by the impact of his fringe players as well as the club's youngsters and concedes their displays have given him something of a selection dilemma.

"I think (winning 5-0) is an indication of how far the players have come," said Dalglish. "It is they who get the results on the pitch, and they did fantastically well against Birmingham.

"It is very pleasant to see the boys come in, and it was great that Maxi got three and Joe got one.

"It is good to see they have kept themselves as close to match condition as they can with the way they have trained, and when they get their opportunity to play, they can play very well.

He continued: "We did really well against Birmingham.

"We had two young lads at right and left-back, and wee Jay in the middle of the pitch. Yes Steven never played and Andy never played, but that is what the club is all about. That is what a squad is there for, to deal with injuries and suspensions as and when you get them.

"It all comes back to myself when they do well. The more they do well, the bigger the problem for me, but the more pleasant it is as well."

Meanwhile, Dalglish was asked about the calibre of Lionel Messi following his double in Barcelona's Champions League triumph at Real Madrid.

"I don't think you can compare him to others. He compares to Lionel Messi. He's his own man. He's a fantastic footballer and they are a great side to watch as well."

The boss was also quizzed about players being linked with moves to and from Anfield in the summer.

"But it's not worth commenting on all the names appearing in newspapers. I'd rather have a cup of tea!"