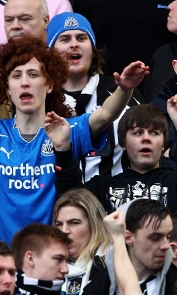 Michael Martin from Newcastle United fanzine True Faith provides the view from St James' Park ahead of his side's visit to Anfield on Sunday.

How are you feeling heading to Anfield?

Pretty positive, as it's more than likely we'll be playing PL football next year and that was the objective for us or any promoted team. Even though we had a squad on top-level wages with plenty of experience in the top division. If we can push on a little and finish in the top 10, I think that would send us into the summer in good heart, ahead of something crazy happening at United, as it always seems to.

How do you think you'll feel if Andy Carroll steps out in a red shirt against you?

I'm still heartbroken about it all. I shouldn't be like this after forty years of following them but I put his leaving on a par with Supermac in '77 and Waddle, Beardsley and Gascoigne in the 80s. He's a symbol of how the people running our club have always put a short-term profit ahead of real, on-the-field success. It's gone on for years.

Have you felt his absence?

Without a doubt. The team was geared around him and we're a blunt instrument in attack. The injury to Leon Best hasn't helped but he's not a PL player anyway.

For me, the central defensive partnership of Williamson-Collocini with Tiote in front is the bedrock of the team. Nolan and Barton are very important to us too. Enrique has done well going forward but some of his defensive work can be poor.

Joey Barton claimed the other week he was England's top midfielder. Discuss...

He's better than most and better than plenty getting call-ups. James Milner? Scott Parker? Jordan Henderson? Gareth Barry? Please. He's found his spiritual home at NUFC. The fans like him, he's settled down and he's playing good football. I'd think Lampard and Gerrard were entertained by his claims though.

We've got little in attack. It's obvious. Good hearted triers but little quality.

Who do you rate on our side?

I think Gerrard is a magnificent player and I like what Carragher brings to the team. Suarez looks like next season could be a big one for him. Liverpool have quality all over the pitch.

Best and worst memories of playing at Anfield?

The best was definitely the one we won 2-0, which I believe was one of the Kop's last stands. Cole and Lee got the goals and it coincided with a Hillsborough anniversary when our support paid its own tribute too. That was a great moment of two great sets of fans coming together for the right reasons. I was actually on the Kop in the 80s when we won in our relegation season (I think I may be going senile) with a Scouse friend of mine and almost fainted with shock as Liverpool were unbeatable in those days. Winning 1-0 in the LC when Steve Watson was playing up front and scored an amazing goal was a good night too. Ironically, one of the most memorable was an FAC third round game in '84 (I think) played on the Friday night for TV and I think we had over 14k at Anfield. In the words of the song from the 74 FAC final (to the tune of the Blaydon Races): "We taught the Scousers how to sing, we taught them how to sup, the only thing we didn't do was win the FA Cup." We lost 4-0 and were outclassed by one of the best sides in Europe but it was my first visit to Anfield as we'd been in the Second Division for a few years. For many years it was my favourite away ground because of the Kop. I loved its size, shape and the colour. Fantastic. It's not any more. Old Trafford is, I'm afraid. Obviously the night we lost 4-3 with Collymore scoring the goal in the 100th minute is framed as the night we lost the league but it wasn't really. We lost it at places like Man City and West Ham where we were drawing and losing matches we were nailed on to win. No one ever goes to Anfield expecting to win.