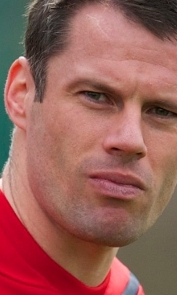 Jamie Carragher will move into joint second place in the all-time appearance list for Liverpool if he faces Newcastle United this afternoon.

The Reds stalwart is one match short of Ray Clemence and Emlyn Hughes who both played 665 times for the club.

Here are the rest of the pre-match stats courtesy of Ged Rea.

Liverpool are looking for their 50th win at Anfield in this the 74th league meeting between the sides on this ground.

Earlier this season Liverpool lost 3-1 at St James' Park in what was Alan Pardew's first game in charge.

Dirk Kuyt equalised Kevin Nolan's opener, before Joey Barton and Andy Carroll sealed the points for the Magpies in the last 10 minutes.

The Reds have in fact scored 39 goals in the last 15 visits of the Magpies.

The Reds are unbeaten in the last 15 Anfield league clashes with today's opponents, winning 13.

There has not been a goalless draw in the last 51 meetings between the teams since February 1974 on Tyneside.

Dirk Kuyt's first Liverpool goal came against Newcastle at Anfield in September 2006 - the Reds winning 2-0, while Lucas' first Reds league goal was also against the Magpies in a 3-0 win in May 2009.

Glen Johnson scored the first goal of his professional career against Newcastle in November 2003 in a 5-0 Chelsea home win.

Liverpool have won 19 and lost eight of the 33 Premier League meetings between the sides.

The 33 Premier League meetings between Liverpool and Newcastle have produced 105 goals.

Liverpool's biggest Anfield league win over Newcastle came in August 1967 - the Reds winning 6-0. Their heaviest defeat by Newcastle on this ground was by a 5-1 margin in December 1907.

The last Liverpool player to score a hat-trick in this fixture was Michael Owen in a 3-0 win here in May 2001. Michael had previously achieved the feat for the Reds at St James'.

Andy Carroll scored 31 goals in 80 league games for the Magpies and 33 in 91 appearances in all competitions.

The third hat-trick of this Barclays Premier League campaign was scored by Andy Carroll in a 6-0 Newcastle home win over Aston Villa.

Maxi could play his 50th game for Liverpool in all competitions if selected, as could Sotirios Kyrgiakos.

Dirk Kuyt has scored seven goals in his last six league games and 11 in his last 12 in all competitions for club and country.

Martin Skrtel (prior to this weekend's fixtures) is one of only 11 outfield players to have started every Premier League game of this campaign.

If Liverpool win all their remaining four games they will better their points tally of last season by one. In 2009-10 they amassed 63 points.

In scoring five against Birmingham last weekend the Reds maintained their record of having scored at least four goals in a league game in every season since they last failed to do so in 1919-20.

The Reds go into this game having scored 11 goals in the last three home league games against the two Manchester clubs and Birmingham.

Liverpool are the only team to have scored in every Barclays Premier League fixture they have played in 2011.

Only Manchester United (16) and Chelsea (13) have won more league games at home this season than Liverpool who have won 11.

Newcastle have not scored in their last four visits to Anfield.

The Magpies are aiming for their eighth league double over Liverpool and only their second in the last 77 years.

Joey Barton is the only visiting player to be sent off at Anfield in the Premier League with two different clubs - Manchester City in 2006 and Newcastle in 2009.

Danny Guthrie played seven times for Liverpool with his last appearance coming against his current club at St James Park in November 2007.

Newcastle have won five league games on the road this season - the same number as Manchester United (before this weekend's games). Their successes have come at Everton, West Ham, Arsenal, Wigan and Birmingham.

However, that win at St Andrew's is their only victory in the last seven away games in the Barclays Premier League.

United's one win in the last seven games came when they defeated Wolves 4-1 at St James' a month ago. Since then they have lost at Aston Villa (1-0) and drawn with Manchester United at home (0-0), and 1-1 at Blackpool.

Jonas Gutierrez is the only player to have appeared in all 34 of United's games this season.

Twenty of Nile Ranger's last 21 appearances for the Magpies have come from the substitutes' bench.

Stephen Ireland scored at Anfield last season for Manchester City in a 2-2 draw.

The last Newcastle player to score a hat-trick against Liverpool was Andy Cole in November 1993.

Scorers this season: (League in brackets):