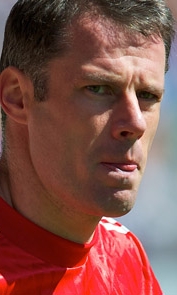 Jamie Carragher insists that winning will always be his primary motivation as he prepares to clock up another milestone at Fulham tonight.

The Reds defender will move into second-place outright in Liverpool's all-time appearance last when he features in his 666th match against Mark Hughes's side.

However, he remains adamant that any celebrations will be muted if they don't pick up the victory that would aid their Euro quest.

"It's going to be a proud night for me but the most important thing is getting three points," he said.

"The last time we went to Fulham we didn't play well and me getting sent off just capped a bad day.

"There are always little things in the back of your mind you use for motivation and that's one of them. Hopefully I can redeem myself.

"The previous season Yossi Benayoun scored the winner in the last minute so it's not been that long since we won there. It's a massive game for us."

The Reds arrive in London in the knowledge that a win will move them two points clear of Tottenham in fifth place.

Carragher is well aware of how crucial next Sunday's clash with Harry Redknapp's team could be in deciding who nets the final European berth - but insists Fulham must not be underestimated.

"This is probably even more difficult than the Spurs game," he said.

"Fulham are playing really well at the moment and at home they are always good.

"They are very solid and well organised. The pitch at Craven Cottage is very tight so it's difficult to break them down

"But we are in good form ourselves so it should be a great game."

Carragher will receive a special ovation from the travelling Kop when he leads Liverpool out tonight.

He admits he has always had a unique bond with the supporters and believes their desire to see Scousers make the grade means standards are always much higher with local players.

"The supporters have been fantastic to me," he said.

"They probably see me as like them. I'm a supporter and I feel the results like them. When you lose you take it home with you.

"Towards the end under Gerard Houllier when we weren't doing well I maybe got a bit of stick but I was playing full-back and that wasn't my position.

"I ended up playing for England there so I obviously did a good job but a modern full-back flies up the wing and that wasn't me. I'm just glad I ended up going back to centre-back. In football you have critics and you have ups and downs. It can be tough for local lads.

"Everyone is delighted for the young lads coming through at the moment. But if they are here for a long time they will have critics, don't worry about that. They will have to come through that.

"It can easily change from one week to the next."