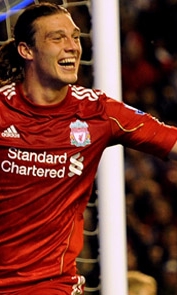 Andy Carroll is poised for a return to action after Kenny Dalglish revealed he has resumed training ahead of Sunday's crucial clash with Tottenham.

The No.9 missed the 5-2 destruction of Fulham with a knee injury but could feature in the showdown for fifth place after making a rapid recovery.

The Reds head into the encounter two points ahead of Harry Redknapp's side and know that a victory would seal a place in the Europa League next season.

However, Dalglish has warned against any complacency when they face a team that have already proved their quality throughout a campaign that was capped by an eye-catching run in the Champions League.

"We know it's a huge test against Spurs. They have been punished for their success this year. They've had too many games and have been competing in too many competitions. That's unfortunate for them but it's a measure of their success that they've gone that close. So it's going to be a tough game.

On Wednesday afternoon Liverpoolfc.tv broke the news that Jay Spearing's impressive form at the heart of the Liverpool midfield has resulted in a call-up to England's 40-man U21 squad for this summer's European Championships.

Dalglish believes it is a fitting reward for the 22-year-old's role in recent weeks and has commended the youngster for the way he has reacted to his selection.

He said: "It's a great reward for Jay. He's on a good run at the moment. Obviously his performances have been fantastic. He's signed an extended contract and he's got a call-up to the England squad which is fantastic for him.

"It hasn't made any difference to him though. He was there in training, working the same as he had before. That's important, that when people get success they are able to handle it.

"He's certainly been able to do that, so we are delighted he has got his reward."

The boss was also asked about his aims over the next three years as he bids to help restore Liverpool to former glories.

"I don't think they've done me too badly in the past so I'm not going to change now.

"We all want exactly the same thing and that is more important than sitting here and shouting our mouths off about what we are aiming for.

"We are aiming for three points on Sunday and then we will take it from there."