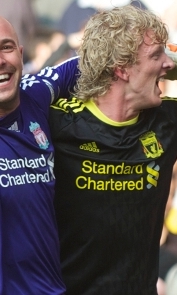 Pepe Reina has revealed how he is relishing the prospect of being a part of a bright future at Liverpool Football Club under the management of Kenny Dalglish.

The Spanish custodian was left delighted by the news that Dalglish had signed a three-year contract to remain as Reds boss on a permanent basis.

Reina is convinced the club are heading in the right direction with the Scot at the helm - and he's determined to assist in bringing major honours back to Anfield over the coming years.

He told Liverpoolfc.tv: "I am looking forward to next season. We have had excellent news on Kenny's contract, Steve Clarke's and all of the technical staff. We are heading in the right direction and we are optimistic.

"I have always said (I am looking forward to next season). Of course there was a bit of doubt back in December and January because we were not even close to where we are now.

"I think by making the right steps and taking them, we can all see the difference between now and then. That's why we are now optimistic about the future and are looking forward."

Reina revealed he found out by watching television, but was left overjoyed upon hearing details of how the 60-year-old will remain at Anfield until 2014.

Reina added: "I was having treatment and I saw it on the TV! But I am really happy and the rest of the lads are too.

"We all have smiles on our faces now and hopefully it will be for long. Of course, we have to be calm because we know how hard it is to compete with the big teams out there.

"Fifth position is not the one that belongs to Liverpool - we aim higher and hopefully next season we can finish higher."

While confident of an exciting future for Liverpool, Reina's short-term aim will be overcoming Tottenham Hotspur at Anfield on Sunday and securing European qualification for 2011-12.

"We are all looking forward to next season, but we have to finish the job on Sunday," he said.

"By winning we will mathematically be sure of fifth and that is our target - to beat Tottenham, make sure we get into Europe for next season and then get some rest, which I think we deserve as well."