Keegan on Kenny, Luis and Andy

'The Liverpool FC Family Tree' - the brilliant new official club publication - charts the rise of the Reds from 1892 through to the present day - and you can order your copy online now.

With a foreword from Kenny Dalglish and exclusive interviews and fascinating stories from years gone by, 'The Liverpool FC Family Tree' is a must-read for all true Reds.

To give you a taster of some of the fresh content inside the 258 pages, here's an excerpt from Jamie Carragher as he discusses his early days in the game.

THE FIRST STEPS TO CARRA'S GOAL

In 1988, Jamie Carragher had a moment of madness. The Everton-supporting youngster did the unthinkable and swapped Liverpool's centre of excellence for that of his boyhood heroes. It was an aberration that was to last just two weeks.

While no-one could doubt Carragher's commitment to the cause nowadays, at the time the lure of playing at Goodison Park turned his head.However, Everton proved to be a disappointment to him and the opportunity to see the likes John Barnes, Jan Molby and Kenny Dalglish every day inspired a change of heart.

"I think it was because his son Paul used to train with us then too, but it was still great! He would come from Anfield in his suit and watch us train in a local gymnasium at seven or eight o'clock at night, which shows how dedicated he was to Liverpool Football Club at that time."

Carragher's path to becoming a Liverpool legend began as a six-year-old with his junior side Merton Villa, where he featured in a position that may shock those who have grown accustomed to his no-nonsense style of play.

"My first ever position playing football was right or left midfield because I was a lot younger than the other kids," he reveals. "I was probably six or seven playing Under-10s football for Villa so I think they tried to keep me out of the middle really, where it is a bit more physical."

The St James' Catholic Primary School pupil made an instant impression and his performances soon attracted the attention of Bootle Boys at the age of nine.

By this time he had converted into a centre-forward and in one season he even managed to fire an impressive tally of 38 goals! His passion for the game and ability with the football meant his coach at the time, Ian Chapman, had no doubt Carragher had the ability to make it in the game.

He said: "I used to call him Billy Whizz. He played with an infectious enthusiasm, wanting to take all the corners, throw-ins, free-kicks and do everything. He was the best player Bootle Boys have ever produced."

While many fans believe his first goal at Anfield came on his first start for Liverpool against Aston Villa in 1997, they may be surprised to see that it actually came years earlier during a regional youth cup final.

"I scored for Bootle Boys when I was about 10 or 11 at Anfield and it was at the Kop end as well," says Carragher fondly. "I cut in on my right foot and hit a shot that went right in the top corner, but the keepers were quite small then so it wasn't too difficult.

"I think we lost to Liverpool Boys 3-1. They always had the edge on us because they had about 300 other schools to pick from. We only had about 10 or 12 schools in Bootle so we did quite well, considering."

It was during his time with Bootle Boys that local scout Harry Hodges spotted him and recommended him to Liverpool.

"He picked up a few of us from Bootle Boys," he recalls. "I was about 12 at the time. He was the scout for the Liverpool area so he'd been watching Bootle Boys because the best players from all the schools in the area played for them. Four or five of us got invited to Liverpool and it went from there really."

Carragher's arrival at Liverpool did not prevent him from continuing to play for his local teams and during his final year at Savio High School, he had a trial with Sefton U14s.

But it was only a brief spell as his ability meant he was destined for greater things. The prospect of a career in football began to take shape when he was selected to go to the National School at Lilleshall. 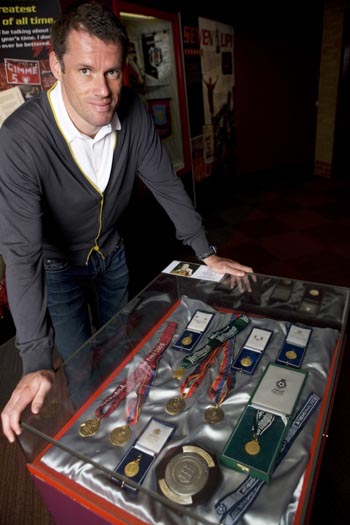 In August 2006, the man who played a significant part in Jamie Carragher's road to stardom passed away.

Harry Hodges, who died at the age of 80, was the local scout who spotted Jamie when he was playing for Bootle Boys back in the late 1980s. While Carragher has since gone on to achieve success as one of Liverpool's brightest homegrown stars, he has never forgotten just what Hodges did for him.

"Well he passed away a while ago and I went around the house with some flowers for the family and it was a sad day," recalls Carragher.

"You know, I owe him a great deal and I still know his sons and his grandsons very well. It wasn't just me he spotted, I think he picked up Stephen Wright as well.

"He did a lot for Liverpool and obviously he was delighted with how I've done and I kept in touch with him for a long time. I was very disappointed to see him pass away but he always did a good job for the club - I'll remember him fondly."