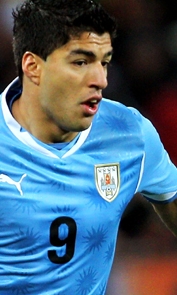 Luis Suarez warmed up for the Copa America by helping Uruguay to a 3-0 friendly victory over Estonia last night.

In their final friendly before kicking off their Copa America campaign, Oscar Tabarez's side were too strong for their opponents and ran out comfortable winners thanks to goals from Caceres and Lodeiro, as well as an own goal from Rientam.

Suarez, who seems certain to be named in Uruguay's final 23 for the tournament, was involved in the build-up to the third goal after 71 minutes.

Uruguay get their Copa America campaign underway against Peru on July 4 before further group games against Chile (July 8) and Mexico (July 12).